The fruit processing plant, a government investment promotion initiative, whose main objective is to support value addition to local oranges and mangoes, with a view of improving household incomes in the country, currently produces fruit concentrates and ready to drink juice dubbed Teju Juice.

Government, through the Uganda Development Corporation, (UDC) owns 80 per cent shares, while the 20 per cent are owned by the Teso Tropical Fruits Cooperative Union (TTFCU).

Ideally, Teso fruit farmers are meant to supply the big bulk of the fruit requirements meant to be purchased primarily from eastern and northern Uganda.
The factory was also meant to improve farmers’ livelihoods and household income through purchase of homegrown Ugandan fruits.
However, The Soroti Resident District Commissioner (RDC), Mr Robert Adiama, says the factory may not buy locally produced citrus fruits when there is still continuous supply of imported concentrates from South Africa.
He says the factory has been doing production using concentrates imported in 2019.

“I have told those officers [factory management] to write me a brief such that I share with my bosses in government, because I am worried our fruits may not be bought by the factory,” Mr Adiama says.
Mr Adiama further notes that the fruit factory despite government’s efforts, is still hiring equipment and a mango processing machine from Makerere University.
“I was shocked to find out that the factory is still hiring a processing plant from Makerere University for extracting mango juice at Shs400,000 daily. This means there is need for government to install more machines at the factory,” he adds.

While farmers had anticipated that the factory would provide a ready market for their fruits after many of them saw a drop in the prices of the fruits, there still remains a limited sense of delight among them.
Several farmers are engaged in orange growing, a perennial crop that they rely on as a source of income to fight poverty.
This newspaper has learnt that although many orange farmers claim to be registered members of TTFCU, through which they supply their products to Soroti Fruit Factory, just a small percentage of them continue to supply the fruits, leaving the same market dynamics of the past at play.

Many farmers in Teso still look at Kenya, Tanzania and sometimes Rwanda as potential market, but always through middlemen who buy on behalf of the foreign businessmen.
With the farmer association’s 20 per cent stake in the factory against government’s 80 per cent, government has more say in decision-making than the farmers.
Soroti Fruit Factory was birthed out of farmers’ frustration upon failing to find a suitable market for their grafted fruit products.

The grafted oranges were first introduced in Teso through Serere Agricultural Research Station, and later popularised by Naads in the mid-1990s.
Mr Patrick Ojoki, an orange farmer in Lwala Village, Kaberamaido Sub-county, Kaberamaido District, says their hope in the factory has since reduced from the time the factory was commissioned in 2018.

Mr Ojoki, whose orange orchards sit on a five-acre piece of land, told Daily Monitor at the weekend that they are still dogged by a continued shortage of reliable and profitable market for their products.
“I am a registered member of TTFCU but I have never received a call [from the union] that they are coming to buy oranges from me, not even from other farmers I know of in my area. The fruit factory is yet to meet our expectations,” he said.

Mr Ojoki says the reason the factory was set up was to address the market challenges they had but that the same challenges have persisted even after the commissioning of the factory.
“I recall the media always highlighting our plight, and government sending emissaries for feasibility studies, which birthed the concept of a fruit plant in Teso. However, the plant is yet to put a smile on our faces,” Mr Ojoki added.

Market
Mr Valentine Etwou, another orange farmer in Odot Village, Kaberamaido District says because oranges are perishable upon maturity, coupled with poor storage, they are always in a haste to sell to whoever is willing to buy their products at whatever price.
He reveals that he sells a bag of oranges weighing about 300kg at between Shs35,000 and 75,000, depending on the demand, especially from Kenya, Tanzania or Rwanda.
Mr Etwou says during Covid-19-induced lockdown, they were forced to employ their children and wives to sell the fruits to travellers at the roadsides, often at throw-away prices. 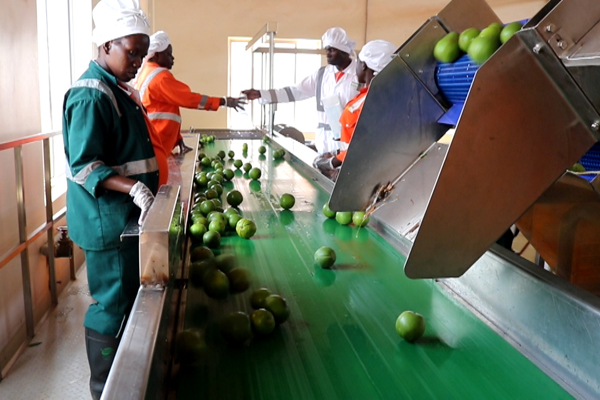 Workers sort oranges before they are fed into the machine for processing at Soroti Fruit Factory at the weekend.

Mr Robert Ogalo, a renowned orange farmer in Ocaapa Sub-county in Serere District, says farmers registered under TTFCU were the main beneficiaries as the factory demanded citrus for processing.
Citrus farmer’s bodies have primary societies, who on behalf of TTFCU, aggregate fruits before they are delivered to the factory.
Mr Ogalo says the problem at hand is that the plant has limited capacity. Secondly, some of the varieties which farmers have in their orchards are not the best consumed by the plant.

“I believe the prospect for the factory will, with time, catch up. We should also understand that the plant is not the only one in the market, there are other several beverage companies which are directly competing with Soroti Fruit Factory,” he says.
Mr Ogalo acknowledges that Kenyans, Tanzanians and other foreigners still offer market for oranges from Teso, but the price question is still in the hands of middlemen.
He urges fellow locals to consume products from the factory such that the demand for their products goes up.
Mr Patrick Angus Opolot, another fruit farmer in Nyero Village, Nyero Sub-county, Kumi District, says there is no good business partnership between the farmers and the fruit factory.

He accuses the management at the factory of contracting fellow staff with registered companies to supply fruits to the plant, thereby technically kicking other local farmers out of business.
“The factory is there, but since its inception, you cannot supply it with fruits as an individual farmer,” Mr Opolot alleges.

Mr Douglas Kakyukyu Ndawula, the chief executive officer of Soroti Fruits Factory, says since the plant started commercial production on October 15, 2019, a total of 109 farmer groups and cooperatives have benefited from supplying their products to the factory.
Mr Ndawula says more than 100 registered farmer groups are waiting to supply their products to the factory as they upgrade the plant’s production capacities for both orange and mango fruits.

He adds that the President’s pledge to have the factory upgraded for more production is in the offing and being spearheaded by Uganda Development Corporation.
He says as the main buying entity for fruits in Teso Sub-region, they are looking at empowering farmer cooperatives through grants and donations, to enable them improve quality of their products.
“Some farmers lose between 40 and 100 per cent of their output in the gardens due to poor handling so with time, we are looking at extending on garden services,” Mr Ndawula explains.