Residents and local leaders in Mbale City have raised alarm over the continued pollution of water bodies by waragi distillers in Nabitiri Village, Bukasakya Sub-county.
The locals say the distillers are using  rivers Nashibiso and Namatala as a dumping ground for molasses.
The rivers are the major sources of water for farming and domestic use in Mbale and Budaka districts.
Mr Joseph Gudoi, a resident, said the pollution risks the lives of people and animals.

“We are not safe and our lives are at risk. We request the government to intervene in order to save our lives and environment,” Mr Gudoi said.
He said the residue also emits a foul smell that is killing plants and fish.

“The distillers have created tunnels for the flow of the discarded molasses, directly into the rivers. This is causing pollution,” he said.
Mr John Manana, another resident, said government has done little to restrain distillers from contaminating rivers and environment.
“When National Environment Management Authority (Nema) and other officials visit, they make pronouncements but don’t follow up for implementation,” Mr Manana said.

Channels blocked
Recently, Nema and environment police conducted an operation in which they blocked all the channels through which waste, locally known as kangara, has been flowing.
The operation followed  a series of meetings with waragi distillers and local leaders on how the waste could be managed.

Mr Kenneth Onen, the councillor representing the Acholi Community at Bukasakya Sub-county, however, blamed the officials for blocking the channels. 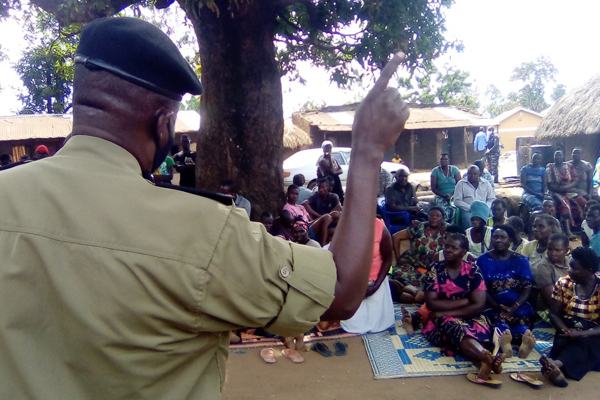 “We request police and Nema not to use much force. We need some time to dig a lagoon. They should not have blocked the channels,”Mr Onen said.
The deputy commandant of Environmental Protection Police Unit, Mr Simon Okoshi, said they wanted the distillers to get an alternative.

“We wanted to ensure that waragi distillers dig ditches to contain the waste and prevent water contamination,” Mr Okoshi said.
He added that they also ordered the distillers to suspend their operations until they construct a lagoon.
Mr Joseph Anguyo, a distiller, said government should know that waragi brewing is the community’s main source of  livelihood.

“This is our only source of income. The government should only sensitise how we can better our operations,” he said.
The senior environment inspector of Nema in-charge of eastern region, Ms Esther Oskoli, said they are not chasing away the distillers but they only want to ensure their operations are not a threat to the environment.
The administrative manager of Mbale Industrial Park, Mr Kyle Feng, said bad smell has chased away three potential investors.

“Because of the contamination and smell from the River Nashibiso, several investors have since left and we are not attracting any new investors to the park until the problem has been addressed,”Mr Feng said.
The Mbale District environmental officer, Mr Charles Wakube, said the district has temporarily banned the production of crude waragi because of its adverse effects to the ecosystem.

“We are not stopping the activity but we want them to construct a lagoon to contain waste,” Mr Wakube said.
However, Daily Monitor’s investigations indicate that despite the temporary ban, some distillers are still involved in the waragi business.
The distillers say they will not abandon the business unless government gives them an alternative source of livelihood.

Ugandans have a tilt towards humour, and even in the hardest of times will have something to trigger laughter

What is the endgame for Hamas and Israel in new showdown?