A further 22 people have died during unrest raging in South Africa, a provincial official said on Tuesday, taking the national death toll from days of violence to 32. 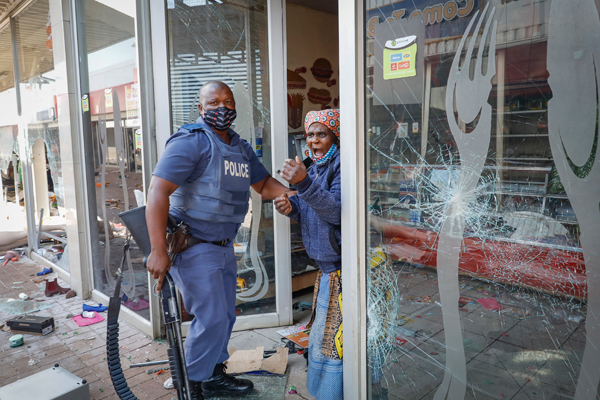 An elderly woman screams as she is arrested by a police member following looting and vandalism at the Lotsoho Mall in Katlehong township, east of Johannesburg, on July 12, 2021.

"These were people killed during stampedes as protesters ran riot," he said, without specifying which parts of the province.

President Cyril Ramaphosa on Monday deployed troops to help police halt the violence and looting sparked by the jailing of ex-president Jacob Zuma.

Southeastern KwaZulu-Natal -- Zuma's home region -- is the epicentre of the unrest.

Protests erupted last week shortly after Zuma started serving a 15-month term for snubbing a probe into the corruption that stained his nine years in power.

The violence has so far been confined to the two most populous provinces of KwaZulu-Natal and Gauteng, which houses the economic hub of Johannesburg.

A member of the South African Police Services (SAPS) arrests a looter inside the Lotsoho Mall in Katlehong township, East of Johannesburg, on July 12, 2021

The late Francil Ekalungar’s widow, Ms Christine Nabwire thanked God and the courts of law for dispensing justice for her late murdered husband