It was well before noon, yet Beyenesh Tekleyohannes's house had already been buzzing for hours: more than 30 guests were singing, praying and sharing plates of shiro stew and lentils in honour of a major Orthodox Christian holiday.
The atmosphere on that November day was so lively that no one noticed the Eritrean troops approaching on foot down the winding dirt road into Dengolat, a village in northern Ethiopia's Tigray region, until it was too late. 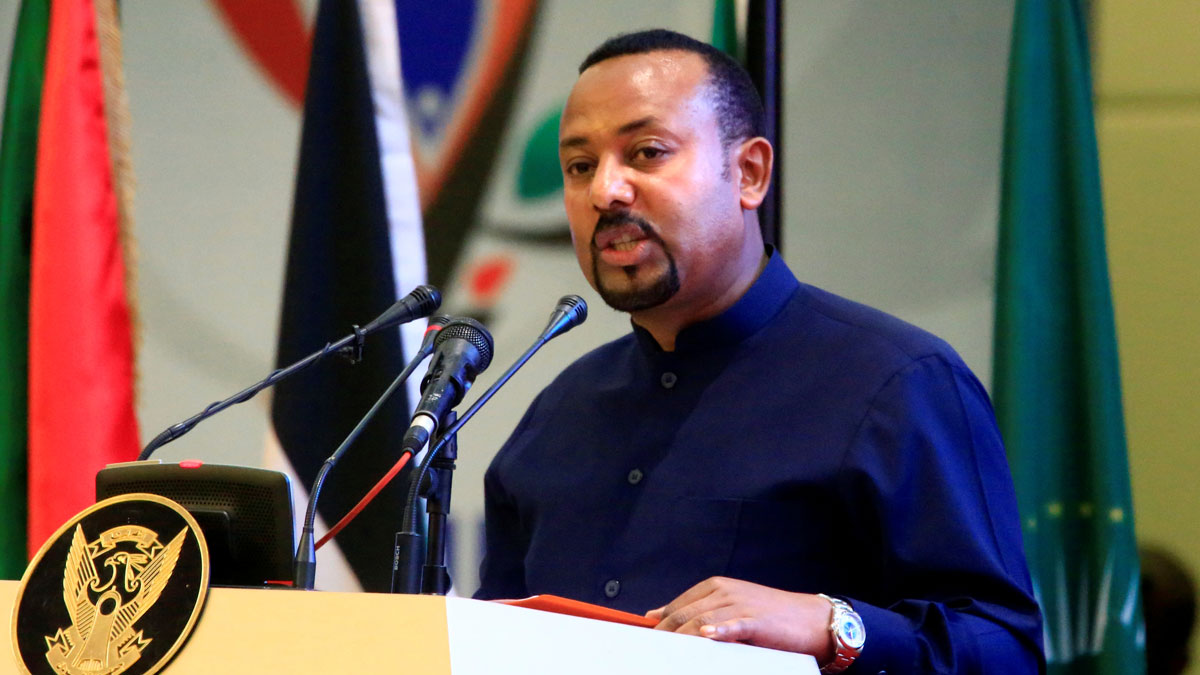 Wearing military uniforms and speaking in an Eritrean dialect of the Tigrinya language, the soldiers forced all the guests inside, yanked out the men and boys and marched them to a sun-scorched patch of earth down the hill.
Beyenesh heard the first gunshots as she fled in the opposite direction to safety, and immediately feared the worst for her male loved ones down below: her husband, two adult sons and two nephews.

When she emerged from hiding three days later, Beyenesh discovered all five had perished in the massacre.
The soldiers had tied their hands with belts and ropes and shot them in the head. 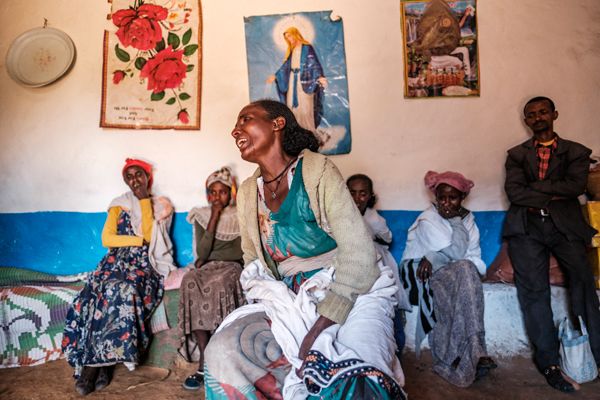 Beyenesh Tekleyohannes (C), cries in her home as a group of relatives look on in the village of Dengolat, North of Mekele, the capital of Tigray on February 26, 2021.

"I'd rather die than have lived to see this," Beyenesh said, tears rolling down her face as she described how the annual festival of Saint Mary turned into a bloodbath.
Local church officials say 164 civilians were killed in Dengolat, with most of the deaths occurring on November 30, one day after the festival.

That makes it one of the worst known atrocities in the ongoing conflict in Tigray.
Prime Minister Abiy Ahmed's government has tightly restricted humanitarian and media access to the region, and for nearly three months Dengolat residents despaired of sharing their story with the world.
AFP reached Dengolat last week, interviewing survivors and viewing mass graves that now dot the village, a collection of stone houses surrounded by Tigray's signature steep rock escarpments.

Human rights groups fear that instead of an extreme example of the violence in Tigray, what happened in Dengolat could turn out to be disturbingly typical.
"There are so many spots of violence and massacres in Tigray. The full scale is yet to be known," said Fisseha Tekle, Ethiopia researcher for Amnesty International.
"That's why we are asking for a UN-led investigation. The details of the atrocities need to come out, and accountability should follow."
So far only Addis Ababa has said it is probing "alleged crimes" in the region. 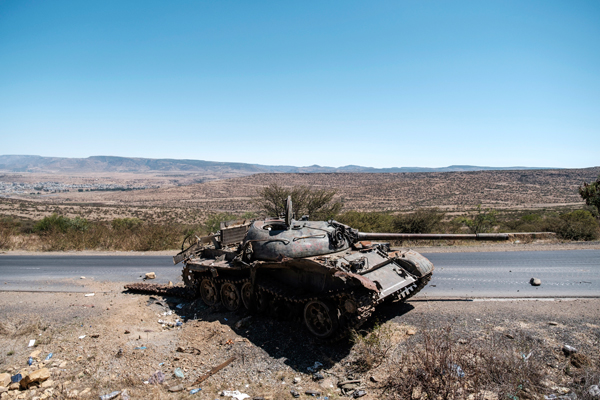 A damaged tank stands on a road north of Mekele, the capital of Tigray on February 26, 2021.

No mistaking Eritreans
Abiy - who won the Nobel Peace Prize in 2019 - announced military operations in Tigray four weeks before the festival, saying they came in response to attacks by Tigray's longtime ruling party on federal army camps.
The powerful Tigray People's Liberation Front (TPLF) dominated Ethiopian politics for decades, and tensions had soared with Abiy after he took office in 2018 and was accused of sidelining the party.
As the war drags on and reports of atrocities mount, soldiers from neighbouring Eritrea, widely reported to be backing up Ethiopian troops, are often fingered as culprits.

Addis Ababa and Asmara deny Eritrea's military is present in Tigray at all.
Last week Amnesty published a report detailing how Eritrean troops "systematically killed hundreds of unarmed civilians" in the Tigrayan city of Axum, also in November 2020.

Tigrayans in both places have said there was no mistaking the nationality of the perpetrators: In addition to their accents, they cited facial scars specific to Eritrea's Ben Amir ethnic group.
Dengolat survivor Tamrat Kidanu, 66, said he was walking to his maize fields the morning the Eritreans arrived, and was shot in the right thigh.
Unable to move, he lay on the ground and listened as the soldiers mowed down other men, including his recently married 26-year-old son.

Tamrat Kidanu, 66-years-old, a survivor of the massacre of Dengolat, sits on his bed at the Ayder Referral Hospital in Mekele, the capital of Tigray on February 26, 2021.

Two decades ago, when the TPLF dominated the central government, Eritrea and Ethiopia fought a brutal border war that left tens of thousands dead.
Many Tigrayans including Tamrat see Eritrean soldiers' present-day conduct as a form of revenge.
"This kind of crime is to exterminate us, to humiliate us," Tamrat said from his hospital bed in the regional capital Mekele, where he is unable to sit up without the aid of a rope.

Church under fire
As Eritrean soldiers fired on men in the centre of Dengolat, hundreds of other civilians cowered in terror in a centuries-old Orthodox church up in the mountains.
The soldiers soon warned, though, that the church would be shelled if the men didn't walk out and surrender.
Some tried to flee higher into the mountains, but Eritrean soldiers shot them dead before they could get very far.
Gebremariam, 30, who requested his name be changed for fear of reprisals, was among the few who turned himself over to the Eritreans.

He was tasked with helping to bury the dead, transporting the bodies - their heads blasted open by bullets -- on a makeshift stretcher to mass grave sites.
Standing before one of the sites, situated behind a cluster of cacti, Gebremariam scoffed at officials' claims that the conflict has involved minimal civilian harm.
"What you see in front of you proves that is a lie," he said. 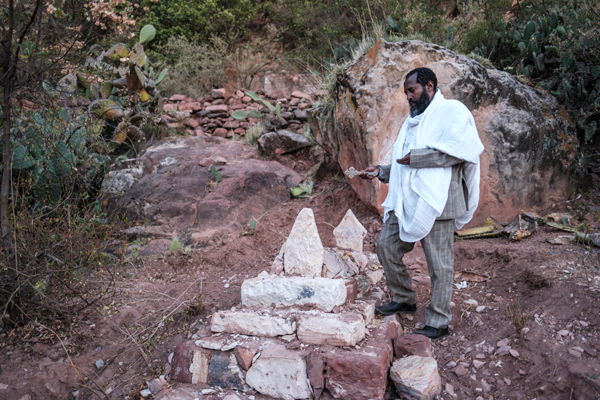 Kahsu Gebrehiwot, 45-years-old, Ethiopian Orthodox Priest, prays next to the grave of a victim of a massacre allegedly perpetrated by Eritrean Soldiers, in the village of Dengolat, North of Mekele, the capital of Tigray on February 26, 2021.

'You need to speak'
Dengolat residents have had few chances to tell the story of the massacre.
After the Eritrean soldiers left, Gebremariam and other Dengolat residents painted some of the stones marking the mass graves a bright sky blue.
"We thought that way maybe a satellite could see them," Gebremariam said.
When a team of AFP journalists arrived in the village, dozens of men and women rushed out, some clutching framed photographs of their dead relatives.

As women wept and pounded the ground, some crying out the names of their dead sons, men sobbed into scarves pulled over their faces.
Kahsu Gebrehiwot, a priest at the Orthodox church in Dengolat, bemoaned the fact that not even Ethiopia's Orthodox leaders were denouncing the killings, to say nothing of the federal government.

"When people are dying and they are saying nothing, that's a sign that they fear for their lives," Kahsu said, referring to the church leadership.
"But as the Bible tells us, if you see something bad happening to people, you need to pray, but you also need to speak."

The vaccines only have a six-month shelf life, according to manufacturers

Ms Sarah Langa Siu, the chief registrar of the Judiciary, said their prayer is for Finance ministry to release the money, latest the first week...