Advertisement
By AFP News
More by this Author

Russian opposition leader Alexei Navalny has accused President Vladimir Putin of being behind his poisoning, in his first interview published since he left the German hospital where he was treated.

"I assert that Putin is behind this act, I don't see any other explanation," he told the German weekly Der Spiegel, which published extracts from the interview on its website Thursday.

Navalny was evacuated to Berlin for treatment after he collapsed in August while on a flight from Tomsk to Moscow after a campaign trip to support opposition candidates in local elections.

The Kremlin critic was discharged just over a week ago and his first comments to the press came as European leaders were holding a summit during which the question of a response to Russia may be raised over the Kremlin critic's case.

Germany, which holds the presidency of the EU, has said toxicology tests show he was poisoned by the Soviet-era nerve agent Novichok.
France and Sweden have independently corroborated Germany's findings.

Chancellor Angela Merkel's government has also warned Moscow of possible sanctions if it failed to thoroughly investigate the case.
In a sign of how seriously she was taking the case, the German leader paid a visit to Navalny in the Berlin hospital Charite where he was receiving treatment.

The Kremlin has firmly denied allegations of involvement and accused Western leaders of launching a disinformation campaign over the opposition leader's illness.

Instead, it pointed to tests carried out by Russian doctors who first treated Navalny showing no toxic substances.

Navalny was finally discharged on September 22 after spending 32 days in the Charite hospital in the German capital, including 24 days in intensive care.
The Kremlin critic has been active on social media since being brought out of the coma.
Posting a photograph of himself sitting on a Berlin bench, Navalny said on Instagram last week he was far from fully recovered and would require rehabilitation.
"The plans are always simple: a physiotherapist every day. Possibly a rehabilitation centre. Stand on one leg. Take back control of my fingers completely. Maintain balance," he wrote.

In a separate blog post, he had also said that the three European labs had found Novichok "in and on my body".
He noted that Russia had still not opened an investigation but that he "did not expect anything else." 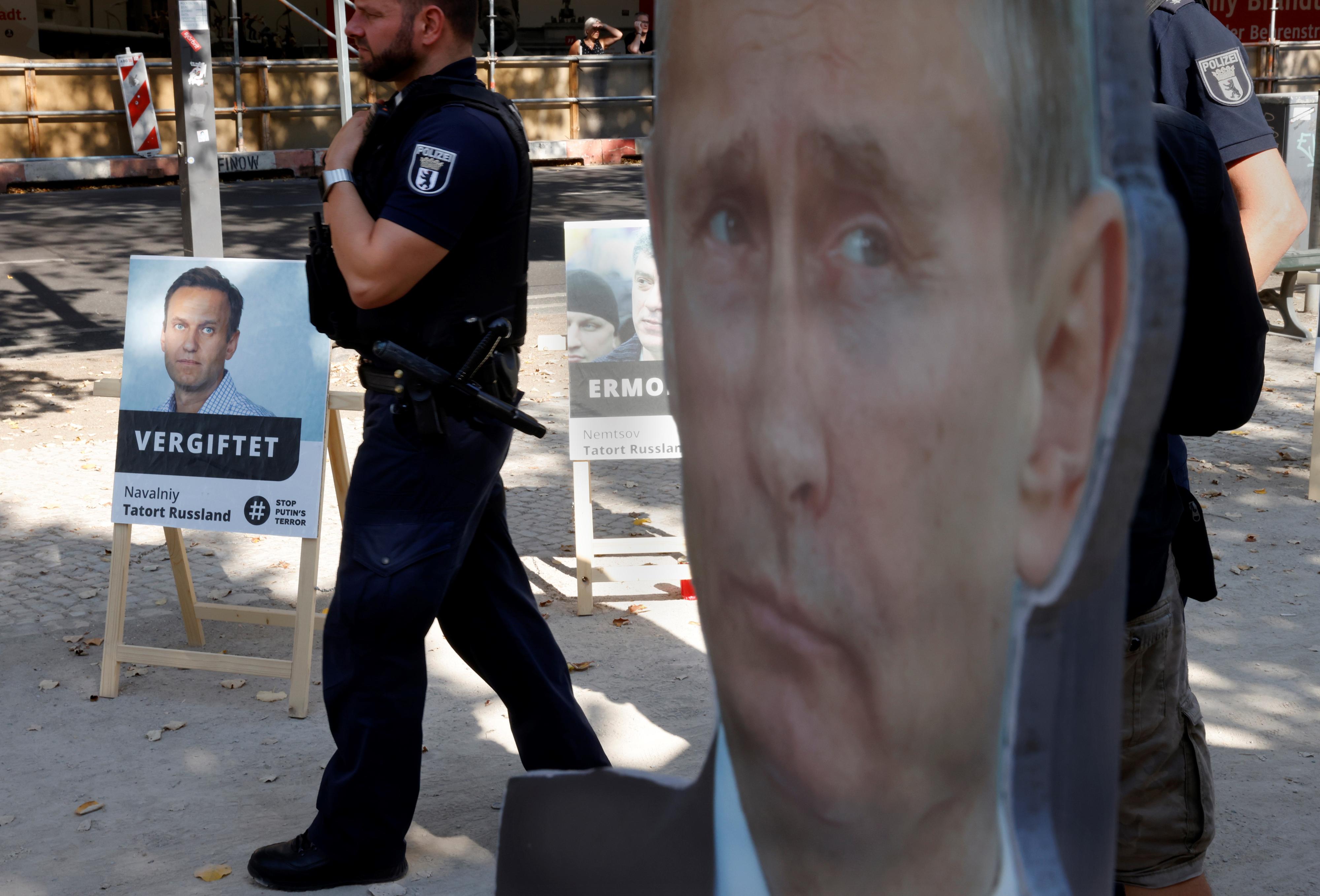 A poster with a picture of Russian opposition leader Alexei Navalny (L) with the headline "poisoned" is seen near an effigy of President Vladimir Putin outside the Russian embassy on Unter den Linden in Berlin during an anti-government protest on September 23, 2020. PHOTO / AFP

Navalny's poisoning has heightened tensions between Russia and the West, in particular aggravating the relationship with Germany.

Merkel had always insisted on keeping channels of dialogue open with Moscow but she has sharpened her tone lately, with Navalny's case coming a year after a murder in a central Berlin park that German prosecutors say was ordered by Russia.

Navalny aides said that German experts found Novichok on a water bottle taken from the hotel room where he stayed before being taken ill.
The bottle appears to have been key evidence for Germany's conclusion that the lawyer and outspoken critic of President Vladimir Putin was poisoned with the deadly nerve agent.

Novichok was also used to poison ex-double agent Sergei Skripal in Salisbury, England, in 2018. He survived.

Under Lee Kun Hee's leadership, Samsung rose to become the world's largest producer of smartphones and memory chips, and the firm's overall...

NRM shows off power of money