Fast-spreading coronavirus variants have ignited global concern over whether existing vaccines will be able to protect the world from a virus that is constantly mutating.

Variants that have emerged in Britain, South Africa, Brazil and now India have all been the focus of fears of implications for the Covid-19 pandemic.

Here's what we know.

Viruses continually mutate as tiny errors are introduced each time they replicate cause new variants to appear. The SARS-CoV-2 virus is no different, and has already undergone several thousand mutations since it emerged in humans in late 2019.

Of the current known variants, three are particularly worrying: those initially detected in southeast England, South Africa and in travellers from Brazil arriving in Japan.

They circulate respectively in 139, 87 and 54 countries, according to an April 27 update from the World Health Organization.

It has designated them "variants of concern" because of their increased transmissibility and/or virulence, which worsens an epidemic and makes it more difficult to control.

The WHO also listed seven "variants of interest" in its April update -- up from three a month earlier.

These are under surveillance because of potentially problematic genetic characteristics.

The latest variant added to this list is the one initially spotted in India, where a huge surge of cases in recent days has swamped hospitals. It has now been recorded in at least 17 countries.

The other variants of interest were initially detected in Scotland, the United States, Brazil, France, and the Philippines.

And there are others circulating and being tracked by the scientific community through genetic sequencing.

"The coming weeks and months will tell us whether they fall into the worrying category of variants that spread rapidly, or if they will remain as variants that circulate weakly," Etienne Simon-Loriere, head of viral evolution at France's Pasteur Institute, told AFP.

The three "variants of concern" are all understood to be more infectious.

But for now, estimates of transmissibility are largely based on observations about how fast a variant spreads and given this can depend on various factors, such as social distancing measures, it can be difficult to pinpoint the increase in contagiousness.

The WHO estimates that the English variant is between 36 percent to 75 percent more contagious, while the South African strain is thought to be 1.5 times more transmissible.

It said data for the Brazil variant, known as P.1, is still preliminary, but a recent study of health data in the city of Manaus where the variant has spread widely had suggested it could be 2.5 times more contagious than previous strains.

In recent days there have been increasing suspicions that the Indian variant may also spread more quickly, as case numbers rocket.

The WHO says this transmission could partly be explained by shortfalls in public health measures, as well as several large public meetings that have been allowed to go ahead, "including mass gatherings during cultural and religious celebrations, and elections".

Millions of pilgrims, mostly without masks, have attended the recent Kumbh Mela religious gathering in the country's north.

But the variant also has a combination of mutations potentially associated with increased transmissibility.

All variants are categorised according to the mutations they have acquired. Each occupies its own spot in the genetic family tree of SARS-CoV-2.

It's a tree that is constantly growing branches, as more variants emerge.

Unlike viruses themselves, variants do not have a recognised international naming system, so their official titles tend to be somewhat technical.

People have thus resorted to the snappier terms "English variant", "South African variant" and so on, although this has raised concern that certain countries will be stigmatised.

Most mutations will not have "a direct benefit to the virus or other public health impacts", according to the WHO.

But some can alter how it spreads or interacts with the immune system.

The English, South African and Brazilian variants all share a particular mutation -- named N501Y -- that is thought to increase infectiousness.

The mutation occurs on the virus' spike protein, which makes it more effective at binding with human receptor cells.

And the South African and Brazilian variants carry another mutation, E484K, suspected of reducing the immunity acquired either by a past infection (with therefore an increased possibility of reinfection), or by vaccines.

Most of the research so far on this question has been on the English variant.

British authorities said in January that the strain that emerged in England was up to 40 percent more deadly, based on a number of studies in the UK.

One of these, which was published in the BMJ medical journal in March, found that the variant was 64 percent more deadly than pre-existing strains.

Passengers arriving on international flights get their Covid-19 coronavirus screening done at the Anna International airport in Chennai on April 28, 2021. PHOTO/AFP

But in mid-April, another study found that this variant did not cause more serious forms of Covid-19 -- although it focused on patients already in hospital, so could not show whether the variant increased hospitalisation across the general population.

Several studies have shown that while vaccines maintain their effectiveness against the English variant, they might have a weaker effect against the South African and Brazilian strains, because of the E484K mutation.

The Indian variant raises the same fears because of a nearby mutation -- known as E484Q -- but more research is needed.

A small preliminary study made public found that the Covaxin vaccine, from the Indian laboratory Bharat Biotech, remains capable of neutralizing it although its efficacy was reduced.

This is an important nuance that applies to the other variants as well -- even if vaccines are less effective against them, it does not mean that they do not work at all.

Also, most studies focus on a single response of the body -- the production of antibodies.

They often do not assess other parts of the potential immune response, such as from memory T- and B-cells.

One recent study by researchers from the US National Institutes of Health gave cautious reassurance.

While they said more research was needed, the NIH said the work suggested the T- cell response in people who have been infected -- and possibly those who have been vaccinated -- was "largely not affected" by the mutations in the English, South African and Brazilian variants and "should offer protection against emerging variants". 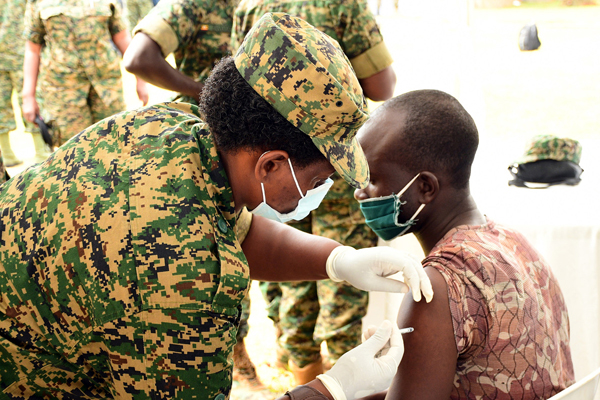 A Uganda People’s Defence Forces (UPDF) soldier receives a Covid-19 jab at the Senior Officers’ Diagnositic Centre in Mbuya, Kampala, on April 18. More than 280,000 doses of Covid-19 vaccines in Uganda could expire before being used. PHOTO/DAVID LUBOWA.

Meanwhile, manufacturers are working on updated vaccines, tailored to the variants.

This is why, experts say, it is crucial to vaccinate as many people as quickly as possible.

And measures such as distancing and mask wearing will continue to be vital, even as more and more people receive a vaccine.