Advertisement
By Perez Rumanzi
More by this Author

The two had been bedridden at Nakasero Hospital for two weeks battling Covid-19 related complications.
Mukwatsibwe is said to have had hypertension, one of the risk factors for Covid-19.
Bangirana was later transferred to KirudduHospital after his condition worsened.

“She woke up in the morning and walked to the opposite ward where our father was being taken care of, she found out that he was not there, she thought he had died. Before she contacted Covid-19 she had hypertension. She went into coma and never returned,” says Mr Steven Bangirana, the deceased’s son.
He adds: “By some means, our father heard of the news that she had passed on and he also died at KirudduHospital the next day.”

The two were teachers. Bangirana was 84 and Mukwatsibwe was 82 at the time of their death.
The couple  in 2019, during Christmas period, treated their family members and friends to a feast, cerebrating their Golden Jubilee in marriage.

Bangirana served as a primary school teacher, a head master, councillor representing Rukoni Sub-county in Mbarara District Council before Ntungamo was granted district status in 1993.
He became secretary for production in Ntungamo District council. He was elected Rukoni Sub-county chairperson in 2006, a position he served until he quit politics in 2016. 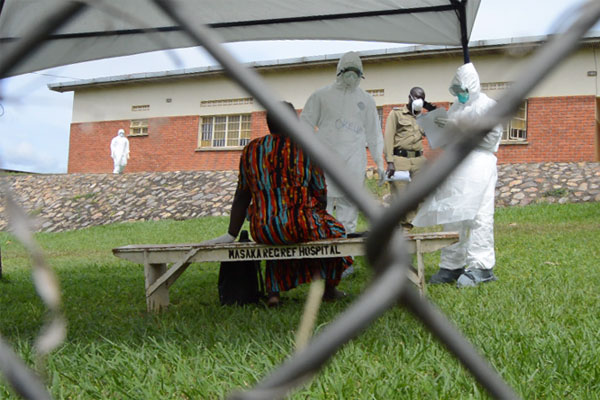 A police officer attached to Mutukula Border Police Station is interviewed at Masaka hospital after testing positive for Covid -19 on May 5,2020. Photo | File

At the time of  his death, he was a farmer, an opinion leader and served at different boards of institutions including schools, Saccos and health centres.
Mukwatsibwe remained a classroom school teacher until her retirement. She operated a shop in Rukoni trading centre up to her death.

Contracting Covid-19
Bangirana often went to hospital for medical check-up during lockdown and visited friends. That’s where the family suspects he may have contracted Covid-19 from.
One of the visits for check-up before he was admitted over Covid-19 was at Mulago National Referral Hospital in November.

Mr Steven Bangirana, one of the sons of the couple,  said from Mulago he went to visit his relative  Mr Kwesigamukama who lived in Kampala, who also later succumbed to the respiratory disease. He died before the Bangiranas.
Bangirana also visited former Nyakyera Sub-county chairperson John Tumwesigye after returning from Kampala.

“Those are the only two suspicions we have as our father’s contacts. Our mother avoided moving, she kept at home; it’s him who brought it home. The rest of us were tested and none had it except our brother in-law who drove father and mother to hospital. He, however, recovered,” says Mr Steven Bangirana .

However, Steven notes that the couple may not have died due to Covid-19.
“They were all first admitted at Nakasero Hospital in separate wards and they could wake up and visit one another. My father got weaker and was transferred to KirudduHospital but my mother was not told. When she woke up in the morning, she checked and found him not there, she thought he had died. She went back to her room and minutes later she passed on.”

“By some information it also reached our father that our mother had passed on and he too died. I think it may not be Covid-19 per se. Yes, they had the infection but they may have died because of failure to handle the news of losing each other,” he says.

Other people who attended the meeting that Mr Tumwesigye was at are Wilbert Pole Pole, a rally driver and NRM chairperson  for Rwashamaire Town Council, and Polly Matsiko, the chairperson of Ntungamo Dairy Cooperative Union who is also the NRM chairperson for Nyabushenyi Sub-county. They too succumbed to Covid-19 in the same period, according to the district Covid-19 steering committee report.

Mr Silver Bakundaine, the oldest son of the Bangiranas, says they will always miss their parents. “They trained us to love, educated us and gave us confidence that we can do anything. They must be proud that they almost died together because they loved each other,” he says.
The Bangiranas are  survived by six children  and 48 grandchildren.

Tragic
Mukwatsibwe died on  December 24 while Bangirana died on Christmas. They were laid to rest at their home on December 27.