Kenya continued to reopen schools for crash academic programme for third term on May 10 to July 16 after seven weeks of break.
At the time in May, Kenya had 143,525 of its teachers vaccinated. Today, Uganda, whose schools remain closed, has  88,825 of its teachers fully vaccinated.

At the time, both Voice of America and BBC news channels reported Kenya’s Education minister George Magoha as asking parents to stay positive and not discourage, but encourage the students, even as Kenya’s National Union of Teachers described the government plans for reopening as inadequate.
By close of July 2021, the UN children’s fund, Unicef, was calling for an end to the school closures, saying it was harmful for children’s well-being and their future prospects.

For Uganda, as recent as Tuesday, President Museveni ruled out any re-opening of schools in October.
And on Monday, Education minister Janet Museveni reaffirmed that continued closure of schools is intended to safeguard the health and lives of the youngsters who are Uganda’s future.
While Uganda has had about 121,687 Covid-19 cases and 3,106 deaths, Mr Museveni, who sent home an estimated 15 million learners  in June, has preferred to err on the side of caution.

Museveni position
He has tasked members of the National Covid-19 Taskforce to scrutinise the influence of limited vaccination of teachers, support staff and elderly parents alongside the risk of the projected third wave of the pandemic on learners returning to class.
Two weeks ago, Daily Monitor reported some ministry of Education technocrats as having proposed the reopening of schools within two weeks,  something that the President reportedly rejected outright.

Mr Museveni’s position has sparked off criticism from his opponents with Opposition doyen Kizza Besigye taking to his verified Facebook account to make his position known. “1,000s of young men are gathering in all of Uganda’s districts in a recruitment exercise for LDUS (paramilitary force) going for training,” Dr Besigye said.
“However, Mr M7 [Museveni] Tibuhaburwa says schools can’t open (even) in October, against his experts’ advice! This is an act of utmost betrayal. That’s why…,”  he added.

In August, Dr Besigye ramped up his criticism of the government’s continued closure of schools, as our East African neighbours reopened, insisting that Uganda should follow suit because the “infection in children is minimal.”
“For Uganda to shut our schools for over a year is the most heinous crime. There is no justification for the measures that have been taken against schools. We’ve known children are least affected by Covid-19. Why should you shut down schools for knowledge acquisition because of Covid?”  Dr Besigye said.
Mr Museveni had an opportunity to respond to Dr Besigye during the International Youth Day celebrations at Kololo Ceremonial Grounds on August 12.

He insisted his government knew what it was doing by keeping schools closed and that it needs no advice from anyone.
“The other day I heard my friend Dr Besigye talking about the opening of schools; that schools should open; that these people don’t have a plan. He was saying the government doesn’t have a plan; that if we had immunised teachers, schools could open…. Okay; thank you very much Dr Besigye, but you have not been through the problem properly,” Mr Museveni said.
The President’s hesitancy could be borne by the fact that students would not easily adhere to the laid down safety protocols or standard operating procedures (SOPs)  when they return to school.

For now, no preparations have been made for enough classroom space to ensure physical distancing, yet the students are prone to frequent interaction and touches on playgrounds, in class, in buses, taxis , and school vans, and are likely not to stick to the rigorous routine of regular handwashing with soap or sanitising.
This proved costly when Uganda reopened schools between March and May before closing them again in June as cases of infections, hospital admissions, and deaths soared during the second wave. The students carried home the virus and infected their more vulnerable parents.

Case of Kenya
Kenya, which neighbours Uganda to the east, according to Reuters, has registered than 242,284 cases and 4,864 deaths has its schools opened since January. Kenya, just like Uganda, had shut down schools in March 2020 when the Covid-19 contagion had just started taking a foothold across the world.

Just like Uganda, eating, playing, studying together — social distancing in many Kenyan schools is almost impossible but schools have pressed on with studies, with many saying they are taking precautions such as wearing masks, getting school-goers temperatures checked and reminding the pupils and students to wash and sanitise their hands.

Both Kenya and Uganda have reported low vaccine uptake among their teachers and non-teaching staff despite the category being prioritised in the current vaccination drive.
Uganda has set a target of vaccinating 550,000 teachers. By Thursday, only 237,930 of the teachers had received the first dose,  with 88,825 having received their second shot.

Case of Tanzania
Tanzania, Uganda’s southern neighbour, which has been unenthusiastic to share its Covid-19 data, has been through drama when it comes to opening schools.
Last year, President John Pombe Magufuli, who has since passed on, ordered that all schools across the country be reopened at the end of July following their closure in March after the outbreak of the pandemic. Tanzania thus became the first country in the region to order full reopening of schools.

Magufuli, who turned out to be a Covid-19 denier, claimed without providing figures that following the continuous drop in coronavirus cases, there was no need to keep schools closed. He, nevertheless, tasked members of the public to adhere to health and hygiene protocols. 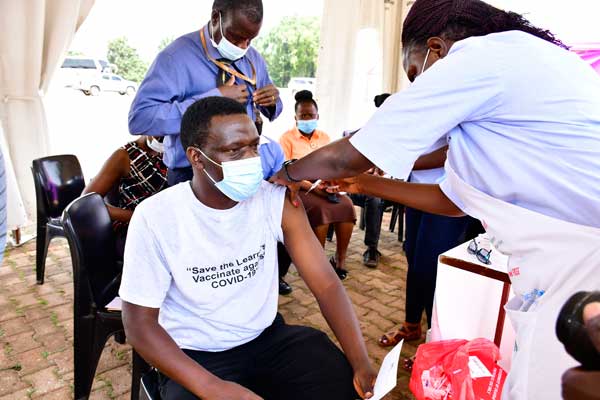 A health worker administers a Covid-19 jab to a teacher during the mass vaccination exercise at Kololo airstrip in Kampala on June 2. The government has insisted on having at least 65 per cent of the teachers and non-teaching staff vaccinated before the schools reopen. Photo | Abubaker Lubowa

When school holidays ended in July this year, his successor, Ms Samia Suluhu Hassan, announced how all schools, universities and educational institutions should install hand-washing facilities, adding that they arrange running water in tandem with soap and sanitiser in every classroom, dormitory, office, gate, library, dining hall, toilets and other public spaces.

Other protocols deployed to stem Covid-19 in schools by the Tanzanian government include social distancing between beds for boarding pupils, and with universities ensuring students and staff observe the physical distancing of at least one metre apart during lectures. Her administration also ordered that schools and universities with large numbers adopt the shift system.

The Tanzanian government also ordered that students suspected of having Covid-19 should undergo testing before going back to school and or university, and also tasked its ministry of education to provide masks.
The Citizen newspaper of July reported Prof Abel Makubi, the Tanzanian Health ministry permanent secretary, as ha having directed: “The Education ministry should ensure schools and universities priorities the correct use of masks. Students, teachers, lecturers should put them on at all times.”

Among other things, the Tanzanian government said for public transport to and from schools and universities, owners should ensure their passengers and attendants put on face masks and use sanitisers before boarding and during landing. Though in July Tanzania claimed it had started manufacturing Corona-19 vaccine in the country in a bid to cut off the importing costs, such efforts are yet to deliver results.

Indeed, Prof Maccabi had insisted that his government had no plans to sell the vaccine to the public neither allow anyone to import any vaccine.
In July, the country imported more than one million Johnson & Johnson vaccine doses from USA.

Quartz,  a global business news and insights outlet, says more than 300,000 Tanzanians have so far been vaccinated, which converts into 0.5 per cent of its 58 million citizens.

The priority, the Tanzanian government said, would be health workers, people above the age of 50 years, and those with underlying health conditions. Ten regions, including Dodoma, Dar es Salaam, Mwanza, Mbeya, Kigoma Iringa, Mtwara and Arusha, which have been hit most by Covid-19, will be given priority, The Citizen reported.

In August, Rwanda, Uganda’s southern neighbour, reopened learning institutions for the third term after the government lifted the 15-day lockdown on the capital Kigali and eight other districts. The lockdown had been imposed in June following a spike in infections, a rise in the number of deaths and the existence of the Delta variant.

The country’s ministry of education on reopening schools said local authorities would offer necessary facilitation to  make sure that learning recommences while observing Covid-19 protocols.

Rwanda case
For Rwanda, learning institutions were closed for 10 months from March 2020 and reopened in November 2020. World Bank data says this shut out at least 3.5 million students. Learners in nursery and lower primary schools were allowed back mid-January and February 2021.

Rwanda again closed its schools on June 29 following a spike in coronavirus infections. But the government reopened the schools in August for the third term after it lifted its two weeks of lockdown on the capital Kigali and eight other districts across the country.

The Education ministry said its officials would support students and teachers in other districts still under lockdown to carry on learning.
The ministry also ordered schools to design catch up programmes to bring to level learners who are lagging behind.

Like in Kenya and Tanzania, Rwanda tasked its school administrators, teachers, learners and education partners to observe Covid-19 preventive measures, keep physical distancing, wear facemasks, hand wash with clean water and soaps or use of sanitisers, and keep windows open.

Reuters indicate that Rwanda, which has a population of about 13 million people, has recorded at least 91, 555 Covid-19 cases and 1,153 deaths.

Latest statistics from John Hopkins Coronavirus Resource Centre on Friday showed that Rwanda has so far administered at least 2,822,493 doses of Covid vaccines, which translates into about 10 per cent of its population having received the jab.

With teenage pregnancies spiking, the Ugandan government has increasingly come under intense pressure to reopen learning institutions with Ms Janet Museveni, the First Lady, who doubles as Education minister, defecting all the blame.

“When our young people are getting married off while still children, it is a sign that the parent or guardian has not fulfilled his or her role in the upbringing of such a child. It worries me when I hear and read about girls dropping out of school. To me, this is a real issue that we should boldly confront as a society,” she said.

Opposition leader Kizza Besigye
‘“For Uganda to shut our schools for more than a year is the most heinous crime. There is no justification for the measures that have been taken against schools. We’ve known children are least affected by Covid-19. Why should you shut down schools for knowledge acquisition because of Covid?”

President Musevni
“The other day I heard my friend Dr Besigye talking about the opening of schools; that schools should open; that these people don’t have a plan. He was saying the government doesn’t have a plan; that if we had immunised teachers, schools could open…. Okay; thank you very much Dr Besigye, but you have not been through the problem properly,”