Immunisation against Covid-19 started in the country on March 10 and officials reported 17 days later, on March 27, that they had inoculated 46,664 people.

The inoculation of the population that commenced with 964,000 doses of vaccines acquired through donations is being done using the AstraZeneca vaccine manufactured at Serum Institute of India (SII).

But this form and place of vaccine acquisition is not what Uganda aspired. In his address to the nation exactly a month after he locked down the country over the pandemic, President Museveni proclaimed that Ugandan scientists were working hard to develop a Covid-19 vaccine and cure, and that they would even get a remedy for the disease before developed countries got it.

“Our scientists are also doing wonderful things. They are working on the vaccine. The ones in Entebbe have understood the virus’ structure and some of them are developing materials to use like diagnostic materials. They are doing very well,” Mr Museveni said in a televised address on April 18 last year.

It has been a year since the country started battling the pandemic but the leaders of Presidential Initiative on Science and Technology, who are manning the said vaccine development and drug, have been unwilling to update the public on the progress, except for a UBV-01N Covid-19 drug, which is undergoing clinical trial at Mulago hospital.

Dr Monica Musenero, the senior presidential adviser on epidemics, who is coordinating the drive to develop the vaccine and drugs, has always maintained that they will give an update when they have reached some stage.

Dr Musenero told this reporter earlier: “We have scientists from Makerere University, Mbarara University of Science and Technology, and Kampala International University, who have come on board, working together to develop Covid-19 vaccine. Other research institutions such as the Uganda Virus Research Institute (UVRI) and the Joint Clinical Research Centre (JCRC) are also involved.”

However, two weeks ago, Dr Maxwell Otim Onapa, the director of science, research and innovation at the Ministry of Science, Technology and Innovation, said there was an ongoing work on vaccine development but that it was still at a very early stage.

However, Prof Denis Byarugaba, the lead scientist in coronavirus research at Makerere University College of Veterinary Medicine, said although vaccine development involves basic processes that scientists in the country can do, the infrastructure and excellence required to deliver a safe vaccine for use by people is still questionable.

“I don’t think we have that capability in the country right now. Maybe there could be some people who are trying to set up or thinking of doing it, but right now there is no one who is developing a vaccine. We should focus on things that we can compete in,” he told this reporter.

The normal vaccine development and approval processes usually take up to 10 years, according Dr Otim. However, this can be shortened for emergency purposes as it has been done in many countries to enable them come up with the vaccine in about 10 months.

The research and innovation director said the country’s scientists are using a molecular approach to develop the Covid-19 vaccine. Though achievable, Dr Otim said the approach is costly, takes time and requires very sophisticated equipment to execute.

Establishing a vaccine manufacturing facility, according to a study report titled, ‘Vaccine Production in Africa’ by Italy’s University of Siena, would require the country to spend at least Shs162b.

A simple manufacturing facility needs about $344 million (Shs1.3 trillion), depending on the volume and type of the vaccine to be produced, according to the report.

Uganda needs almost 44 million doses for the target 21.9 million population – with each person receiving two jabs - and that means the simplest manufacturing facility would be low capacity should Uganda decide to import it.

“These cost estimates do not include the costs involved in production or Process Qualification (PQ) and validation activities. Usually, at least 3–5 product batches will be produced during PQ and validation. There are significant costs involved but, ideally, these batches can later be sold,” the report further reads.

“They [scientists] are using a molecular approach. That means you identify a molecule on the virus that stimulates the body to produce defence mechanism and you sit in the lab and generate subunits of the virus,” Dr Otim said.

Dr Otim said after creating that subunit, it is first tested in animal models, guinea pigs and that if it works, the scientists progress to the next stage. The director explained that from this point that one graduates and starts testing it in humans.

“After you have proven that it works effectively and is not killing the animals. The human trial starts with very few people at stage one. If it works, then you add few more people and that will be the second phase of the clinical trial,” he said.

“After that, you progress to the third phase which has a large number of people in thousands and the fourth phase you do a mass trial. Once you reach that stage, then you can roll it out,” he said.

According to a February 3, 2021 report by the Ministry of Science Technology and Innovations, the government has spent Shs13.4 billion for supply, delivery, installation and commissioning of assorted equipment for vaccine, diagnostics and drug research and development. 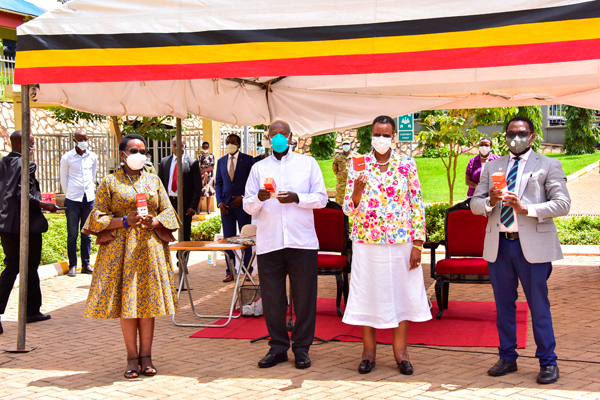 The supplies and installations were made to UVRI, Makerere University, Busitema University, JCRC and Natural Chemotherapeutic Research Institute (NCRI) who are undertaking the developments.

With the development processes still at the early stages, there is no clear timeline when people can expect to have the locally-developed Covid-19 vaccine, according to Dr Otim, if the Ugandan vaccine to maturation.

With limited infrastructure, uncertainties among scientists and being the first time to think of developing its own vaccine, it became apparent that locally-developed serum would not work for an emergency like Covid-19 pandemic.

The country looked outward for inoculation of the population, applying for free doses of vaccines from the Covax facility and opening up for donation of the serum from foreign governments such as India and China.

Covax facility is a global initiative of manufacturers, governments and international organisations, galvanised by the World Health Organisation (WHO), who are aiming to ensure equitable access to Covid-19 vaccine.

Dr Jane Aceng, the Health minister, said the country placed an order for 18 million of the AstraZeneca vaccine from SII, but that the vaccines would be supplied in a staggered manner.

In a March 2 statement, the minister noted that the country would receive the first 400,000 doses of the vaccine in mid-March.

However, the State minister for Health in-charge of General Duties, Ms Robinah Nabbanja, told Daily Monitor two weeks ago that the government failed to get the first consignment on the date they agreed with SII.

Prof Freddie Ssengooba, a health policy specialist at Makerere University School of Public Health, told this newspaper that developing countries such as Uganda will have to wait until rich countries have got enough doses for their population.

Uganda’s search for a solution to the pandemic appeared to lead to desperation in ways that leaders clutched on anything and anyone who made promises coursed high up the political ladder.

“A professor who manufactured the treatment for coronavirus in the U.S., and he has donated the patent to Uganda and within a fortnight, the treatment will be made here. It will be available on the market here in Uganda. It’s being made by a company called Dei International. Not that we should be relaxed, but there’s hope,” Ms Kadaga said.

She was reporting to Parliament after taking an American and another man, a proprietor of Dei International company, to meet President Museveni.

That was the last the country had of the initiative.

However, scientists at NCRI were doing serious work that saw a Covid-19 drug UBV-01N, reach clinical trial level. The drug is currently undergoing a trial at Mulago hospital.

Dr Musenero said although they are progressing well with the trial, shortage in the number of Covid-19 patients is affecting the speed of the trial.

The trial which is supposed to be done among 124 Covid-19 patients admitted to Mulago Hospital, started at a time when the country was registering a sharp decline in reported infections and hospitalisation.

The country was also assessing the use of blood from recovered Covid-19 patients as treatment.

The lead investigator of the project, Dr Bruce Kirenga, told Daily Monitor that they completed the trial and that they are analysing the data before releasing it to the public.

With the delay in local production of vaccines and a thin hope of acquiring enough vaccines from foreign countries, therapeutics are the other important options, according to experts.

Establishing a vaccine manufacturing facility, according to a study report titled, ‘Vaccine Production in Africa’ by Italy’s University of Siena, would require the country to spend at least Shs162b. A simple manufacturing facility needs about $344 million (Shs1.3 trillion), depending on the volume and type of the vaccine to be produced, according to the report. Uganda needs almost 44 million doses for the target 21.9 million population.

What you should know after getting Covid jab

Across the country, Ugandans are continuing to receive the AstraZeneca Covid-19 vaccine jabs. As of Monday, a total of 60,138 had received the first dose of the vaccine, which is being administered to those who are 18 years and above. The importance of the vaccine is to boost the body’s immunity against the acquisition of the Covid-19 virus.

Questions, however, continue to come up on whether strict adherence to the standard operating procedures (SOPs) should be maintained after the vaccination. For example, Ms Josephine Kemigisha, 30, says she did not know whether she needed to continue wearing a facemask after receiving her first Covid-19 vaccine shot on March 10.

“I began moving around without a mask. One day, a conductor threw me out of the taxi because of not wearing one. When I reasoned that I had been vaccinated, he did not care,” Ms Kemigisha said.

But Dr Barnabas Atwiine, a medical practitioner at Mbarara Regional Referral Hospital, advises that since there is always new information coming up about the virus, it is only wise that people continue observing the SOPs until when the concerned authorities such as the World Health Organisation (WHO) say otherwise.

“Ugandans should continue wearing masks even after vaccination until we officially receive more guidance from the experts who developed the vaccine,” Dr Atwiine says.

Regarding the issue of what can likely happen when one misses the second dose at a stipulated time, Dr Alfred Driwale, the head of immunisation at the Ministry of Health, says this information will be availed at a later date.

“I don’t want to start dishing out information that has not been fully verified,” Dr Driwale says.

For now, he says the focus is ensuring that the required age group of Ugandans gets the first dose of the vaccine.

Blocked by YouTube over 'curing' gays, Nigerian pastor speaks up