Advertisement
By Felix Basiime
More by this Author

Population pressure, negligence of duty, and corruption can describe the reasons why Lake Munyanyange, a unique ecosystem for migratory birds and flora in Kasese District, is facing extinction.
Of late, new structures have sprung up in Katwe-Kabatoro Town Council that hosts Lake Munyanyange; building materials and garbage have been dumped on the slopes close to the lake, which poses a great threat to the water body that is a key natural resource of international importance.

There has been increasing human population in Katwe due to fishing at the nearby Lake Edward and salt mining at Lake Katwe, which has caused threats through uncontrolled human activities such as excessive use of firewood from the park, illegal livestock-grazing and charcoal burning, and the presence of settlements close to the water bodies.
Katwe and 12 other settlements, mainly fishing communities, are found within Queen Elizabeth National Park ecosystem, having been demarcated at the time of gazettement to allow for the exploitation of the rich fish resources of lakes Edward and George.

Katwe Town
Katwe Town flourishes because of salt exploitation from Lake Katwe. All these factors have over time attracted more human settlements, leading to uncontrolled human activities on the natural resources.
The Uganda Wildlife Authority (UWA), which manages the park, says Lake Munyanyange is not under its jurisdiction and, therefore, falls under the protection of Katwe-Kabatoro Town Council.
The National Association of Professional Environmentalists (NAPE) accuse authorities in Katwe-Kabatoro Town Council of neglecting Lake Munyanyange and instead engaging in corruption as the lake is polluted.

“Our observation teams in the area last week found out that there are irregular developments on the slopes close to the banks of Lake Munyanyange, which threaten the life of the key crater salty lake and the nearby flora and fauna in Queen Elizabeth National Park.
Mr Rajabu Yusuf Bwengye of NAPE observes: “The National Environmental Act, 2019, does not permit anyone to put up structures close to a water body. [But] what is happening in Katwe is illegal, and this means Nema [National Environmental Management Authority] and local authorities have been engaged in corruption.”

“I don’t think those buildings you see there in Katwe on the slopes of Lake Munyanyange have approved plans. The only eco-tourism lake in Uganda is Munyanyange and when it is extinct, it will cause poverty in the area.”
When contacted about the issue, the Katwe-Kabatoro Town Clerk, Ms Catherine Mbambu, said she was not aware of the situation, reasoning that she has been out of office on a two-month sick leave. But when we put it to her that the developments, building materials and other refuse dumped close to the lake have been there for many months, she referred us to the physical planner.

“I have been in office for one year and I have been out of office for the last two months, I do not know that,” she said.
The Katwe-Kabatoro Town Council physical planner, Mr Rodgers Baluku, confessed that some of the developments close to Lake Munyanyange have no approved plans but argued that they are not in the lake’s buffer zone. 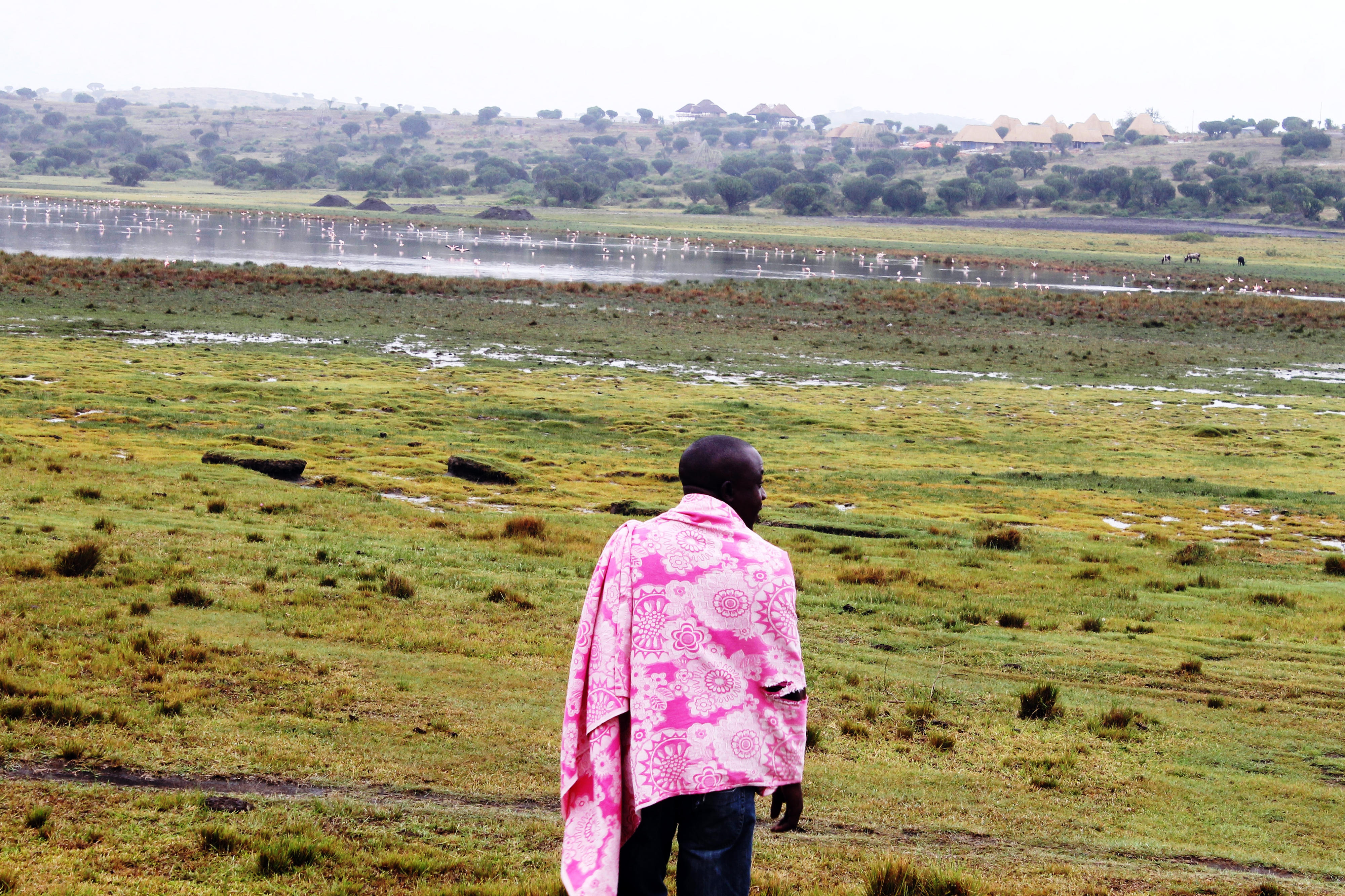 A man watches lesser flamingos at Lake Munyanyange in Kasese District recently. The Lake is an important bird sanctuary.

“True, there is a developer who has put building materials near Lake Munyanyange and he has not complied with the council laws, he is yet to bring his architectural plan for approval. We are engaging him, but the buffer zone of the lake has not been encroached on,” Mr Baluku said.
But he declined to comment when we put it to him that the residues and wastes from the developments end up in the lake.
However, the Kasese natural resources officer, Mr Joseph Kapswera, condemned the developments, saying they are illegal.
“I have not been at the lake recently, but if those structures are not approved, then they are illegal and I condemn that practice,” he said.
He added: “As conservationists, we are not against development, but let the development comply with the laws.”

Risks posed by structures near the lake
Mr Bwengye says the thousands of Flamingos that “honeymoon” at Lake Munyanyange will be forced to relocate and that this will affect tourism.
“The residues from these structures will end up in the lake and this will destabilise it,” he says,
Mr Jeconious Musingwire, the officer-in-charge of Nema, western region, says since the structures are on the slope and close to the lake, the residual materials will definitely find their way into the lake and destabilise the salt formation process.

“Other materials such as soil will cause reactions in the lake, leading to dilution which will disrupt the salt formation,” he says.
“Those materials will affect the geo-process of the lake and neutralise it, leading to extinction.”
Mr Musingwire says whatever affects one salty lake also affects the others because they are on the same contour and share the salty rock base.

“The vents of those four lakes (Katwe, Munyanyange, Nyamunuka and Kasenyi) are interconnected, so if one of the vents has a problem, it will directly affect the others.”
The saline Lake Munyanyange, which is a few metres away from the salty Lake Katwe, is a small seasonal shallow crater lake to the northeast of Katwe Town and is host to thousands of the Lesser Flamingos that tourists flock to Uganda to watch.  The lake is an important habitat for migratory birds and has one of the largest concentrations of the lesser black-backed gulls, Larus fuscus, and other waders.

According to Katwe Ecotourism Information Centre (KETIC), Lake Munyanyange attracts birds that migrate from as far Canada, among other countries. Other birds that migrate to the lake include White Browed Robbin Chats, Black Headed Gonoleks, Long Tailed Starlings, African Hoopoes, Winding, Zitting, Flamingos and Desert Cisticolas.
These birds are Palearctic migrants arriving in October and departing in April. Thousands of these birds roost at the lake but of late, they have stayed at this lake round the year.

Mr Nicholas Kagongo of KETIC says most birds find Lake Munyanyange safer for them as at one stage of the year, it turns muddy and that makes it difficult for wild animals to wade through the mud and prey on them. During this period, the birds roost in the middle of the lake.
Saline lakes, according to geologists, produce salt because there is a depression where water collected. Deep in the ground is the main salt rock that lies on a contour line that connects lakes: Katwe, Munyanyange, Nyamunuka and Kasenyi (Bunyampaka).

All these lakes have a salt rock deep in the ground, but only Katwe and Bunyampaka can produce edible salt. This is because the two lakes have streams that feed them.
Because of their geo make-up, these lakes are habitat to unique flora that attracts thousands of fauna species all over the world.

Salt lakes are geographically widespread, numerous, and a significant part of the world’s inland aquatic ecosystems. They are important natural assets with considerable aesthetic, cultural, economic, recreational, scientific, conservation, and ecological values. Some features, notably the composition of the biota, uniquely distinguish them from other aquatic ecosystems.

Many human activities threaten salt lakes, especially surface inflow diversions, salinisation and other catchment activities, mining, pollution, biological disturbances (for instance introduction of exotic species), and anthropogenically-induced climatic and atmospheric changes. The effects of such activities are always adverse and include changes to the natural character of salt lakes, loss of biodiversity, and fundamental limnologic changes. The effects are geographically widespread, mostly irreversible, and degrade the values of salt lakes.

Kasese and the tourism industry
Kasese District is one of the top tourist destinations in Uganda where visitors come to tour the three national parks (that are the richest in biodiversity in the country), hot springs, snowcapped Rwenzori mountain, fresh and salty lakes, and several rivers) in the district.
According to the Kasese District portal, tourism is a significant economic activity within the district given its natural resource endowment, including mountains and national parks. It has provided employment to a number of people who work as tour guides, as well as working in hotels.

Tourism plays a big role in national development and in this regard, the Uganda Wildlife Authority (UWA) has been contributing to the district development in form of revenue sharing (20 per cent). Under this arrangement primary school classroom blocks, health centres, and community halls have been constructed in various areas of the district.

The gate collection at Queen Elizabeth National Park rose from more than Shs513 million in 2016 to Shs936 million in 2017 as a result of increased volume of tourists visiting the park, according to Ms Olivia Biira, the UWA community conservation warden. Kasese got the biggest share of this money (Shs362 million) because it covers the biggest part of the parks, including birds sanctuaries with more than 6,000 species.

According to the Ministry of Tourism, Wildlife, and Antiquities, currently, tourism is the leading foreign exchange earner.
Mr Herbert Musinguzi, a tour guide and driver, who has over the years driven birders to Lakes Munyanyange and Katwe in Kasese, says: “We usually take many birders to Lake Munyanyange. These tourists like to watch the flamingos there.”
The flamingos at Lake Munyanyange have also attracted investors to the area, setting up infrastructures such as hotels.

Lake Munyanyange
Lake Munyanyange is an explosion crater lake near Queen Elizabeth National Park in Katwe-Kabatoro Town Council.
The park provides a typical vegetation around the lake which is at most risk of human activities such as cattle grazing, the harvest of the vegetation for handicraft making by schools in Katwe-Kabatoro Town Council, depositing of solid wastes from settlers of the urban area and charcoal burning using surrounding rare species of trees.

Lake Munyanyange is an important bird sanctuary and a site of special scientific interest as far as bird populations are concerned, and is definitely the most important of all the saline lakes in the region.
More than 65 bird species have been counted and recorded at the lake on different occasions. The great flamingos are common on Lake Munyanyange around November.  This species feeds mainly on zooplankton, which is abundant in this lake.
The flamingos attract more tourists to Lake Munyanyange because when they migrate here and feed on the algae in the lake, their feathers turn from white to pink within two weeks.

Avocets are also common on the lake, and are known to flock anywhere in Uganda but on Lake Munyanyange, it is easy to watch them from a close distance.
The ruff and gull-billed terns can also be seen on the lake. Generally representing waders. They use Lake Munyanyange mainly as a safe resting place.

The lake crater floor vegetation is dominated by cyperus laevigatus, which occur at the edge of the lake in saline water and mud. There is also another almost pure stand of sporobolus homblei, and the two communities are associated with odyssea jaegari grass, a very rare grass species which in Uganda, only occur around lakes Munyanyange and Katwe.
Between 25,000 and 35,000 tourists visited Lake Munyanyange a year before March 2020. Most of them are interested in flamingos and other visitor birds from Europe. The March 2021 waterfall count recorded 80,000 flamingos at the lake.

“The weather here is favourable for their mating, the food here makes their eggshells stronger than elsewhere,” Mr Kagongo says.
Other saline lakes in and around Queen Elizabeth include; Katwe, Kitagata, Mahega, Murumuri, Kasenyi, Nyamunuka, Kibwera, Bagusa, Nshenyi and Maseekye.