The writing has for long been on the wall. Caesar Chandiga, who has been the poster boy of pool exchanging the baton with Ibrahim Sejjemba, has finally arrived in the paid ranks.

The national seed two has secured a Shs3m move to Zambia where he joins UTH Pool Club alongside Ronz teammate and fifth seed Dennis Ongom.
Pool Association of Uganda (PAU) publicist Peter Kyobe confirmed the move on Friday after the players were cleared to join the Zambian side, becoming the Uganda’s first professional players.

“It is a breakthrough,” Kyobe said.
Former Upper Volta star Rashid Wagaba plays in Zambia while Hazard Lukomwa is in South Africa. But PAU officials confirmed that those moves were not sanctioned by the body.
“Yes, we have players outside but it is only Chandiga and Ongom who have gone through the official channels,” Kyobe added.

In 2019, Chandiga, 20, was still regarded as a new kid on the block yet two years later, he is top of the world.
The Moyo-born player studied in Lira from where he qualified for the National Open. Gulu’s Dianah Gardens snapped him away to boost their Regional League campaign. And it was from here that CKI, formerly Kampala Central, signed him for half season in 2018.

In 2019, Ronz manager Hans Rugari signed him alongside Ongom. The pair have not left the sport the same since.
A teenage sensation
Chandiga made his mark in 2019 when he won the Temuseo Masters, an individual league for the top 20 players finishing above the then top seed Mansoor Bwanika and Ibrahim Sejjemba.
Then a teen, he emerged Clubs Knockout top scorer the same year as Ronz triumphed earning a place on the national team.

In his first international tournament, he was the best player for Uganda in the All Africa Pool Associations blackball individual championship in Mpumalanga, South Africa, winning bronze.
Last season, he was the second best scorer for Ronz behind Glorious Ssenyonjo and he could have topped had the season not been cut short by coronavirus pandemic as he had two games in hand and just three goals behind. 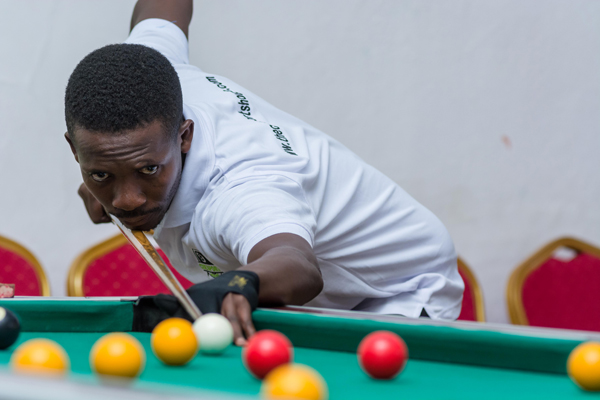 “He is a disciplined athlete. Tactically, he is good in both attack and defence,” Kyobe said.
Chandiga’s moment of truth came during the Esther Lungu Eastern and Central Pool Championships in Zambia in January, where he was part of the winning squad.
“This tournament sold him to the Zambian audience,” Kyobe added.

Chandiga looked south of the border with Ongom, a close friend and roommate. Both were involved in a battle on their first day in Zambia on Saturday where they impressed.
Pool is strictly an amateur sport in Uganda with a few passionate and moneyed managers paying top players handsomely. It is understood that the Zambians’ first choice was the country’s seed one, Ibrahim Sejjemba, but his manager Bob Kateregga is reportedly eyeing better deals probably in South Africa.
Chandiga’s move is thought to involve money the youngster could not refuse.

In a recent interview, Chandiga was focused on joining the paid ranks to change public perception about pool.
“Many people still think this is a sport for amateurs but when we start getting paid, all that will change,” Chandiga said during the Pool Association of Uganda Grand Open at Pot It Bar, a fortnight ago.

National team captain Alfred Gumikiriza, who was scheduled to play Chandiga in a money challenge on Good Friday, says the youngster has opened a door.
“Pool is serious business in southern Africa. If he succeeds, many teams will come for players in Uganda and good enough we have the talent,” Gumikiriza said.
gkatongole@ug.nationmedia.com

Do not be compromised by Museveni – Kyagulanyi