KOBUGABE - FEMALE PLAYER: We rarely get awarded. More over this is a monthly award. I did not know about it until I was called that I had won. I have to be more confident in my game and be more consistent. That’s the way to go.

Husina Kobugabe is on a mission to stay at the top of women badminton after landing the Fortebet Real Stars Monthly Award following her exploits in the Uganda International 2021 at Lugogo Indoor Stadium last month.

Uganda U-20 goalkeeper Jack Komakech bagged the accolade for the best footballer while Joshua Cheptegei, who retained the 5km Monaco Run title on Valentine’s Day took the day in athletics. Rukia Nayiga, who beat seasoned pool queen Ritah Nimusiima to win the Esther Lungu East & Southern Africa Pool Championships in Zambia, was the only omission from the awards that recognise excellent athletes with a plaque and cash prizes monthly.

The 19-year-old Ndejje University student was the best Ugandan performer during the first badminton tournament following the coronavirus pandemic partnering with Marble Namakoye to win the women’s doubles. She also won the mixed doubles with Brian Kasirye, all in straight sets.  Sports was not in Kobugabe’s mind until Senior One in 2013 at Mariam High when she was pulled to the court by friends.

Having appeared for the juniors until 2019 when she took a huge step to the national team. Winning at the Uganda International Open was the highlight of her senior career. In 2017, she won the All Africa School championship in Kampala in the singles, mixed doubles and women doubles.
“I have to be more confident in my game and be more consistent,” Kobugabe said while accepting her trophy at Route 256 Restaurant yesterday. 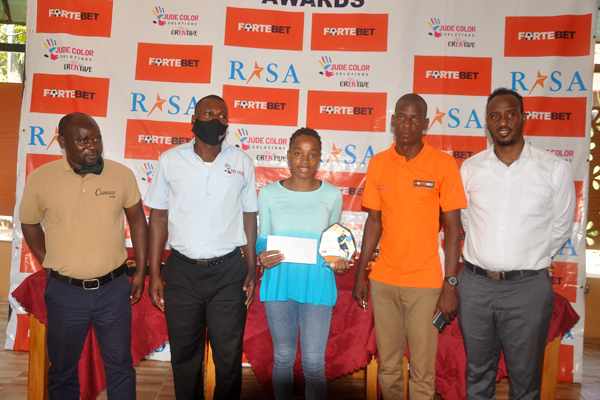 Kobugabe was a quarterfinalist in the singles category losing 21-9, 21-3 to eventual winner Malvika Bansod of India. “We rarely get awarded. Moreover this is a monthly award. I did not know about it until I was called that I had won,” she added. Currently ranked 388 in Badminton World Federation (BWF) in women’s singles, Kobugabe eyes participating in more tournaments to accumulate qualifying points to the 2022 Commonwealth Games in Birmingham and 2023 African Games expected to be held in Ghana.
The Uganda International and the South African international tournament are the last two tournaments available before the Olympic Games.

“That is what I am working on. If I play consistently, I think I can accumulate enough ranking points,” she says.
The first hurdle will be to impress in the 2021 all Africa Badminton Championships to be held in South Africa in April. The monthly awards started by journalist Isaac Mukasa have continued to grow in stature. Yesterday, representatives of Canaan Investments the makers Canaan Bulls Energy Drink and Canaan Soda outlined their desire to join betting giants Fortebet and Jude Colour Solutions as sponsors of the fast growing brand.

Fresh refugee influx from DR Congo as fighting breaks out