Beyond the tactical ineptness discussion lies the elephant in the room – Kajoba’s reported switch to Tanzanian giants Simba.

Advertisement
By DENIS BBOSA
More by this Author

It’s only halftime but Fred Kajoba will feel like he is a dead man walking. Not that he could help it but when you are in charge of one of the deadliest snakes known to man, failure to bite is only acceptable in circus where the fangs have been extracted.

Vipers’ 1-0 home loss against Sudan’s Al Hilal at St Mary’s Stadium, Kitende, on Saturday left the Ugandan champions on the brink of a perennial early exit from the Caf Champions League.
All the pre-match confidence was wiped out by a poor display, particularly in the first half, and if the past is anything to go by, Kajoba is in trouble.

“We had Plan A and Plan B to win the game but we were let down by the missed scoring chances. This was a game we would have won 4-1 on another day,” Kajoba said.
Yes, there’s a second leg to come on Sunday but even the most optimistic of the Vipers’ legion will view this as mission impossible against the two-time Champions League finalists and group stage regulars.

“I have asked the boys to have self-belief that we can overturn the result in Sudan, whoever feels it is impossible shouldn’t board the plane to Khartoum,” Kajoba stressed.
Previously, Vipers management have axed Edward Golola, Javier Martinez, Miguel Da Costa and Michael Nam Ouma after insipid outings on the continent.
In their second last pre-match training at Lugogo, Hilal spent close to 30 minutes mastering the art of set pieces, little wonder that Waleed Bakhiet struck on 25 minutes after Vipers defence failed to clear a routine throw-in. 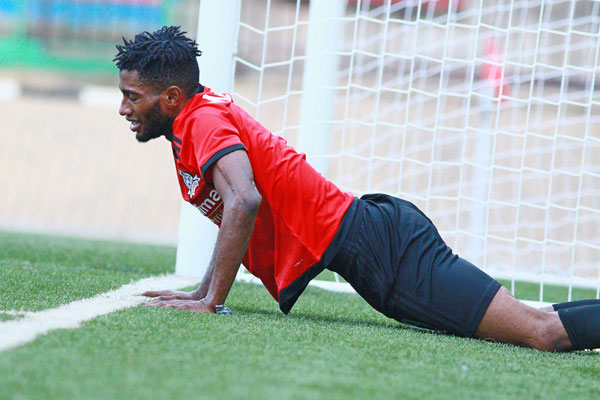 No fangs. Manzoki could not score for Kajoba. Photo/John Batanudde

“We are working on correcting the mistakes. If Mucureezi’s two crosses had been buried by Sserunkuma, Orit or Cesar Manzoki, it would have been a different story now,” Kajoba told Daily Monitor.

Beyond the tactical ineptness discussion lies the elephant in the room – Kajoba’s reported switch to Tanzanian giants Simba.
“I’ve been in contact with Simba but I told them to talk to my boss Lawrence Mulindwa for his approval. At the moment I’m focused on getting past Hilal,” he added.