Unfulfilled Potential.  Ismael Kirungi, Rogers Nsubuga and Moses Ndawula all had glittering careers during the 70s and 80s. They also did share something in the transfer market.  They were all involved in controversial transfer deals with Express, something that caused a storm and a major rift with other top clubs.  Also, all three were naturally gifted footballers, good at dribbling and fantastic in controlling the onion bag, writes Robert Mugagga.

Advertisement
By Robert Mugagga
More by this Author

Kirungi played on the left wing and in midfield. When asked about Ismael Kirungi, former KCCA and Cranes international Tom Lwanga describes him as the greatest dribbler to have emerged from Ugandan football without a doubt.
“Kirungi would dribble past any opponent on the pitch with such ease and also had a rare ball control and game reading,” Lwanga says.
According to Lwanga, it was because of his dribbling prowess that fans nicknamed him “Minora” after a favourite and sharp razor blade of the 70s.

Lwanga and his KCCA teammates will never forget one moment during the 1976 league match against rivals Express when Kirungi dribbled past the entire KCCA defence including the goal keeper only to become excited and overwhelmed as he prepared to score in an empty net.
From nowhere, a KCCA defender confronted and snatched the ball from his boot thus denying him a scoring chance.
Lwanga compares Kirungi to a player like Moses Ndawula, formerly of SC Villa and Express, saying both players possessed a magic left foot that enabled them bring a Midas touch to the pitch.

“Kirungi was so unlucky to emerge at the time of a great player like Denis Obua who proved so good at number 11 in the national team. Kirungi would only be fielded whenever Obua happened to be nursing an injury,” Lwanga notes.
That era had what Lwanga describes as having had the four most outstanding attacking players in left winger Denis Obua, John Dibya on the right flank, Polly Ouma as the centre forward and Swalleh Wasswa at 10.
These dwarfed some good players of the time like Kirungi. At Express, Kirungi proved a real pillar in the team that dominated Ugandan football, winning the the 1974 and 1975 league titles.

He first emerged on the scene back in 1968 while featuring for Express. In 1970, he crossed to Coffee and was part of the team that went on to win the 1970 league title thus checking on the great run of Prisons that had clinched the first league titles of 1968 and 1969.
In 1973, Kirungi returned to Express in the most bizarre. He trained with his teammates at Coffee a day before a league match against Express. 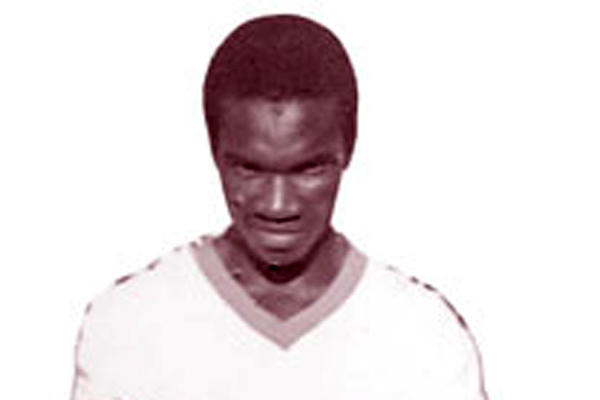 Pillar. Ismael Kirungi has been described as the greatest dribbler there has ever been. PHOTOS/FILE

On match day, Kirungi travelled with other Coffee players in a club bus to Nakivubo stadium.
Upon entering Nakivubo, Kirungi instead made his way to the Express dressing room and played for the Red Eagles against Coffee.

Kirungi played for Express while dressed in Coffee boots and stocks! Express’ self-styled owner and coach Jolly Joe Kiwanuka had days earlier plotted and prepared Kirungi’s movie, preferring to execute it in style on match day.
From then on, Kirungi was an Express player. In the Uganda Cranes team, Kirungi was part of the squad that in 1970 won the Cecafa Senior Challenge Cup when Zanzibar hosted the event.
He also went to the 1974 Africa Cup of Nations tournament in Cairo, Egypt.

Nsubuga was nicknamed “Maniasca” while others simply referred to him as “Super Roger” during his SC Villa days.
He was such a crafty player who dribbled past opponents like a rumba dancer. This excited fans, including those from opposing teams.
His entertaining type of football was often compared to that of former KCCA and Uganda Cranes star Phillip Omondi. They played in the same Uganda Cranes team in the 80s.
The third of five children, Nsubuga was born on December 1, 1960 and therefore shares his birth day with the likes of athlete Stella Chesang and World Cup heroes, Salvatore Schillaci (Italy) and Javier Anguirre (Mexico).
Nsubuga loved football right from childhood. He pursued his primary education at Namilyango Junior Boys School (1969-1971) where the games master David Mpiima spotted him. He made Nsubuga the school captain when he was in primary five.

Because Nsubuga was so skinny, he preferred playing in goal rather than upfront to avoid being brutalised by the big boys.
For secondary education, he went to St. Charles Lwanga Kasasa where a one Brother Andrew advised him to ditch his other favourite sports like swimming, basketball and table tennis to concentrate on football.
Brother Andrew felt that it was football where Nsubuga looked likely to have a bright future saying he would kill his talent by trying to balance between other sports.
It was also at Kasasa that Nsubuga finally left the goal and switched to number 10 in the school team that also had Vincent Ssemanobe who was later to play for Coffee and Uganda Cranes. 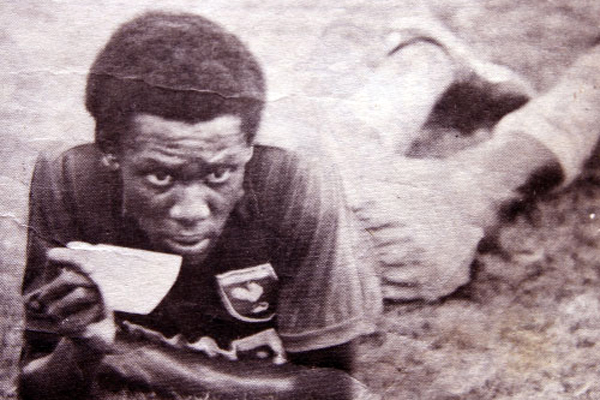 A students’ strike at Kasasa that ended in the expulsion of some students was a blessing in disguise for Nsubuga who later relocated to another school managed by the Brothers of Christian Instruction.
This was Rubaga Boys Secondary School, now Uganda Martyrs High School, which took football more seriously under the guidance of a one Brother Benardine.
At Rubaga, Nsubuga began his journey there to blossom into one of the most feared and respected marksmen of the modern game.
It was here that he partnered with skillful young footballers like Frank Kyazze, Fred Mukasa, Charles Masiko, Jimmy Kayemba and Moses Kayanja to make an all-star school team.

At club level, Nsubuga’s immense talent could not escape the sharp eye of Nakivubo Boys (present day SC Villa) which signed him in 1979.  The team had so many experienced players and Nsubuga found it hard to play in the first team. It was in 1982 when coach George Mukasa arrived that Nsubuga’s potential came through.
The boy proved doubting Thomases wrong and demonstrated how good he was at dribbling and heading the ball.
He was instrumental in the 1982 Villa team that won the first league title unbeaten. At Villa, Nsubuga went on to win more league titles in 1984, 1986 and 1987 plus two Uganda Cups in 1983 and 1986. To add he added the 1987 Cecafa Club Championship.

In 1984, he hit special strands. Nsubuga scored 17 league goals and narrowly missed emerging the league top scorer. Rubaga school teammate Frank Kyazze of KCCA denied him the crown by just scoring a goal more.
In the same year, Nsubuga made his Cranes debut in a Cecafa Senior Challenge Cup game against Zimbabwe when Uganda hosted the event.
Fans will always remember the storm caused by Nsubuga and his Villa teammate Moses Ndawula when they attempted to ditch the club for rivals Express.
Fufa had argued that since Nsubuga had signed a Caf licence to play for SC Villa in continental engagements he had to remain at Wankulukuku having tried to move in the mid-season.
Nsubuga refused to play for Villa and spent a long period out of the team until he turned into a prodigal son and returned to Villa Park.
Many think the current rift between Villa and Express began at that time when Express fans and officials became bitter for losing the opportunity of signing such a great player.

MOSES NDAWULA
During a past interview, former SC Villa and Uganda Cranes winger Sula Kato categorically made it clear that of all the four footballing brothers born in the family of Ssalongo Zakaria Lubega of Masaka, his elder brother Ndawula was the most naturally talented.
Ssalongo Lubega, who too played football in the 50s had four sons that played football at a high level namely Meddie Lubega, Moses Ndawula, Sula Kato and Abbas Mulindwa.
Meddie Lubega played for Police and Simba before finally making it to the national team that went to the 1978 Africa Cup of Nations in Ghana.

His younger brother Ndawula played for Coffee, Villa, Express and Cranes while Kato achieved the same.  The youngest of the four, Mulindwa, also featured in the Ugandan top flight league for Uganda Airlines and Express.
Like many other young footballers of the time, Ndawula commenced his career during his childhood by kicking balls made out of dry banana fibre.
Unlike the lucky kids of today who easily acquire leather balls and playing boots, things were totally different during Ndawula’s early playing days which even lacked the soccer academies we see mushrooming today.
This could go on to show how talented were young footballers of Ndawula’s time.
Imagine that many of these mastered the sport by playing while barefooted.

Ndawula was first signed by Masaka Works FC. Luck came his way when he one day decided to come to Kampala and visit his brother-in-law who happened to be none other than Sam Tamale alias Kapeera who played for Express in the 70s.
Like so many villagers of the time that came to Kampala, Ndawula was overwhelmed by what he saw and decided never to return to the village.
He begged Kapeera to use his influence and help him join Express. Kapeera told Ndawula point blank that Express had so many talented players such that it wouldn’t  entertain and let alone give him a chance of being tried.
After persistent pressure, Kapeera advised the young man to try a less glamorous side like Coffee where he would get a chance of being fielded and improve on his game.
At Coffee, it took Ndawula no time to establish himself as a midfielder of great skill.
Trust the former Villa supremo Patrick Kawooya for having had the eye of an eagle.
One day, while watching a match involving Coffee, he spotted a young and promising midfielder in action and immediately decided to sign him.

This was around 1979 during the days of Nakivubo Villa. As they say, the rest was history for Ndawula who went to excel in the Villa midfield up to the year 1983 winning whatever there was to be won.
He really worked like a piston machine on the pitch earning a call to the national team where he challenged the likes of KCCA’s Fred Mugisha for a place in the team. His last trophy at Villa was the 1983 Uganda Cup and he afterwards sought release to join Express.

Red hot. Moses Ndawula (standing sixth from left- including an Express FC official with a cap) in the Express team that won the 1985 Uganda Cup. PHOTOS/FILE

Kawooya gave him a big NO. Ndawula stuck to his guns saying he would not play for Villa again.
Express protested and took the matter to Fufa with the soccer governing body ruling in favour of Villa.
Their argument was that Ndawula had earlier signed a Caf licence to play for SC Villa in the 1983 continental competition.
Ndawula boycotted Villa games with Fufa slapping a one-year ban on him. Ndawula proved so stubborn that he decided to remain in football limbo for a full season.
At the beginning of 1985, he signed for Express . His departure forced Kawooya to go to Masaka, his hunting area to look for his replacement and there, he landed on Ndawula’s younger, Sula Kato!

Villa sources indicated that the Villa boss learnt later that this was Ndawula’s brother.
Besides Express and SC Villa, Ndawula donned national team colours for several years.
Upon retiring he turned to coaching. “Like father, like son,” so goes an old adage. Ndawula’s son, Moses Ndawula Junior too embraced football and ended up playing for Express and Villa just like his father.

Advocates say 'concerned' over lack of data on PWDs