Advertisement
By Andrew Mwanguhya
More by this Author

Fufa president Moses Magogo on Monday came close to admitting he is behind the production of Uganda Cup games that have been relayed on UBC this season.

A mysterious production company was hired by Fufa to produce Uganda Cup matches this season, with UBC providing airtime.

No tender for the job was advertised, nor was there any known bidding process as required by basic corporate standard operating procedures.

This newspaper has since discovered that the production is done by a one Faisal Musenze, who previously worked with PearlSporto, an entity established at the turn of the last decade with Magogo its principal.

Now, the company associated with Musenze and several workforce that have also worked with PearlSporto is reportedly called Satellite TV.

We could not independently verify its authenticity on the Uganda Registration Services Bureau (URSB) online portal. 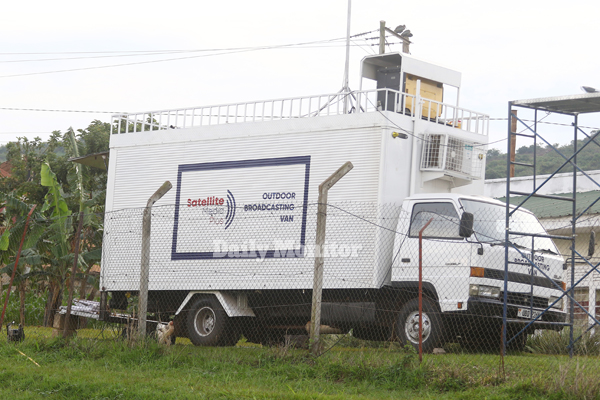 Rebranded. It is reported that Magogo’s PearlSporto rebranded to Satelite TV. The Uganda Cup matches productions this season have been aired on UBC TV with a one Musenze (inset right) heading the production team. PHOTO | JOHN BATANUDDE

The same company was behind the production of Fufa Big League and regional qualifiers at the Fufa Technical Centre, Njeru, recently. The games were broadcast on Fufa TV.

Appearing on Monday Night’s flagship show, the NTV Press Box, Magogo was half-hearted when asked to come clear on the company producing these Uganda Cup matches for UBC.

“It’s true I own Pearl Sporto,” he admitted but without confirming whether it is actually PearlSporto or a shell company producing these matches, “And for me who does the production is not important. “People should know that we don’t have that many qualified companies to do TV production.

“How many companies do you know around that can produce and do a live broadcast?”

Magogo would still not come around to naming the company, whom majority of the workforce maintain close links with Fufa and work or have worked with his Pearl Sporto.

Article 19, clause 3, of the Fifa Code of Ethics on conflict of interest states that “Any such conflict shall be immediately disclosed and notified to the organisation for which the person bound by this Code performs his duties.”

And article 25 on abuse of position says that “Persons bound by this Code shall not abuse their position in any way, especially to take advantage of their position for private aims or gains.

“Violation of this article shall be sanctioned with an appropriate fine of at least CHF 10,000 ($10,000) as well as a ban on taking part in any football-related activity for a minimum of two years.”

Rather than directly respond to these, Magogo dismissively wondered whether critics and Ugandans alike read and interpret the statutes well.

“Instead,” he retorted, “We should be happy that an individual Ugandan out there has the capacity to produce a football game.”

This is not the first time conflict of interest is being cited at Fufa.

In 2012, PearlSporto was handed exclusive rights to coordinate fan travel to Zambia for a Cranes Afcon qualifier, where return tickets, inland movement and accomodation was priced between $1000 and $1400 per traveller for a night.

“Pearl Sporto,” read a statement on Fufa website at the time, when Magogo was the FA vice president in charge of administration.

“... is hereby warned against diverting from the agreed position and to ensure that our fans are given cordial treatment during their travel.

“Fans are however not enslaved to travel with Pearl Sporto but the Federation will not be answerable to queries outside the arrangement known to us.”

Back to the TV deal, while a good number of participating clubs we previously spoke to were happy with the Uganda Cup being televised, they wondered what was there - financially - for them.

“At the moment,” explained Fufa head of Communications Ahmed Hussein in April, “We are giving out the product for free to attract sponsors and show the masses that Ugandan football is a big product.”

Highlighting many of his “achievements in eight years,” Magogo used his time to pump victory fists, not literally, as he prepares for his next four years after being nominated unopposed.

Mujib Kasule and Allan Ssewanyana, who were either locked out or did not return nomination forms, called the exercise a sham and believe Magogo is using the system to lock out any competition.