US congressmen and lawyers have condemned what they called arbitrary arrests and persecution by the Ugandan security agencies after police reportedly raided a hotel in which Kyadondo East MP Robert Kyagulanyi had booked in last night.

Police in Jinja District in eastern Uganda are said to have raided City Hotel in which the pop star popularly known as Bobi Wine booked into in search of him. Mr Kyagulanyi who was slated to have a music show in Jinja on Saturday evening said police had ordered his team out of town, arrested some and escorted others up to Lugazi.

“They have beaten some of them, dragged them onto police pick-up cars and driven them to unknown destinations for no offence whatsoever. Meanwhile, I am still in Jinja town. The police are looking for me everywhere. They have even blocked some roads in search for me! I will try not to avail myself to them- Arua is still fresh in our minds, and we know what they can do. But this injustice must end and we must put it to an end by ourselves. No one else will do it for us,” Mr Kyagulanyi posted on his social media platforms on Saturday evening.

However, US Congressman Bradley Sherman reacted saying Ugandan government must commit to essential principle of freedom of speech.
“Earlier this year (September 2018) 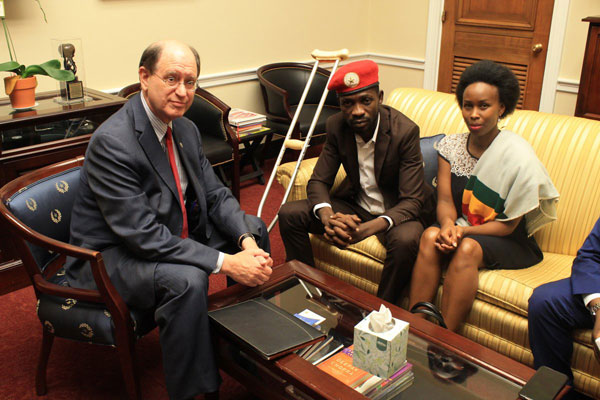 after he was brutally beaten and detained by Ugandan security forces for speaking out against corruption. Today they have reportedly surrounded him and his team. The Ugandan government must commit to the essential principle of freedom of speech,” Mr Sherman tweeted Sunday morning. 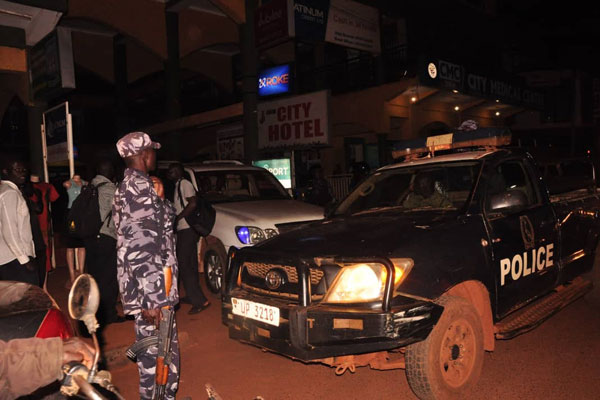 “Reports are coming out that Bobi Wine may be in danger in Uganda. Stifling freedom of speech and expression and arbitrary arrests have no place in a democracy,” she tweeted.
Former New Zealand Prime Minister Helen Clark also urged Uganda to allow opposition space.

“Disturbing reports from Uganda where Opposition MP Bobi Wine is again in hiding following police violently arresting members of his concert crew. Bobi was badly hurt in an earlier violent arrest and detention. Government must allow opposition space,” she tweeted.

Efforts to get a comment from the DPC, RPC and the regional police spokesperson failed by the time of filing this story as our repeated calls to their known telephone numbers went unanswered.
As part of his festive season programme, Mr Kyagulanyi had planned to hold music concerts in Jinja, Mityana and Gulu districts among other places. But soon news made rounds that the shows had been cancelled something that attracted even the attention of members of parliament.
Police on December 6 said they had asked Bobi Wine to follow the right procedures, short of which he would not be allowed to hold the shows.

The Force’s spokesperson, Mr Emilian Kayima, said Police had held a meeting with the singer and told him that he did not provide enough supporting documents including agreements with owners of places where he intended to hold his concerts.
“He didn’t provide us with a plan of how he will handle the revelers. It is not enough to say you are going to have a concert or gathering without indicating the venue and plan for people you expect to attend, ” Mr Kayima told journalists.

Bobi Wine’s US lawyers react
Bobi Wine’s US lawyer Robert Amsterdam in a statement issued last night, said: “This is a clear and brazen act of targeted political repression by the Uganda authorities aimed at violating Bobi Wine’s human rights,” said Amsterdam. “Once again, Bobi Wine has broken no law, the concert was fully and legally permitted, and the other participating musicians were not targeted.”

Amsterdam added that the latest attempt to arrest Bobi Wine for no reason is clearly reminiscent of the events of this past August 14, when the Kyadondo East MP and many others were brutally arrested, jailed, and subjected to extensive torture by agents of the Special Forces Command (SFC).

“The use of violence and intimidation by the government of Uganda against peaceful, law-abiding citizens is carried out with the clear intention of repressing their rights to freedom of assembly and freedom of expression,” he said.

He further noted that they are going to be rigorously documenting every unlawful act and violation of rights by members of the police and their superiors and will seek to hold them accountable before every available international forum.
“The highest authorities have an urgent responsibility to halt this deplorable persecution without delay,” Mr Amsterdam said.