Advertisement
By Monitor Reporter
More by this Author

The family and friends of James Bugembe Ssenkubuge, a Daily Monitor Sports photo-journalist of almost two decades, have blamed his death on the “negligence of and extortion by” Mengo Hospital in Kampala.

But a hospital spokesman said their hands are clean.

Ssenkubuge, 52, died suddenly on Friday, less than 24 hours after he was booked at Mengo Hospital, which billed the family Shs10m excluding Shs200,000 mortuary fees.

Recounting his final hours, Mr Ephraim Kasozi, a close friend, said Ssenkubuge blacked out at a garage in Mulago, where he had taken a car to be fixed, on Wednesday evening and was rushed for first aid to a clinic near his home in Kawempe.

His condition instead worsened and the clinic referred him to Mengo Hospital at about 8am on Thursday.

Upon arrival, according to Mr Kasozi, who was present, the hospital demanded Shs900,000 upfront, which was paid in rapid instalments, to conduct a series of tests and scans, and recommended emergency surgery after he was found to have bled in the brain following a burst of veins.

Staff on duty then said the surgery and three days of treatment would cumulatively cost about Shs9.9m, including Shs4m professional fees for a surgeon only named as Dr Obiga.

The family agreed to the bill and asked the procedure to be expedited, but the Mengo staff said they would only wheel Ssenkubuge into the theatre upon Shs2m down-payment.

The cash was not at hand and after the family hours later presented Shs1.9m mobile money message alert, pending withdrawal, relatives were told to provide cash beforehand, Mr Kasozi said.

When the money was finally paid, the journalist was taken to the theatre past 4pm, eight hours after he arrived and several hours after he required emergency surgery, and while visibly unresponsive. 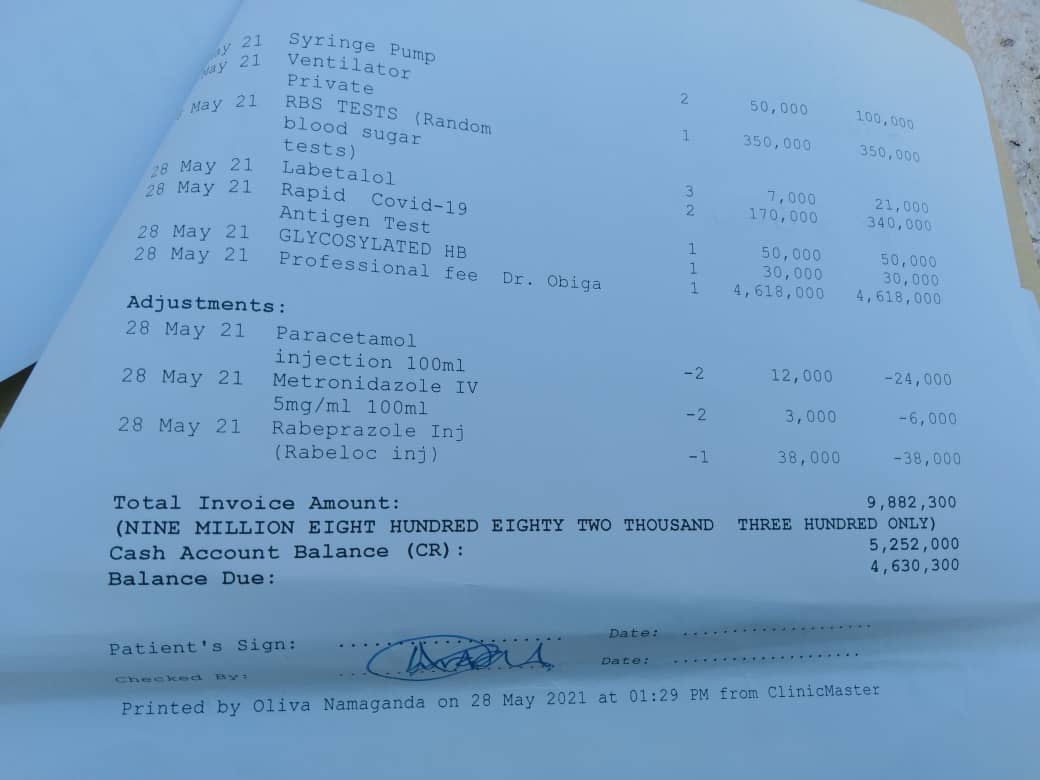 A copy of the receipt from Mengo Hospital.

In accounts corroborated by the widow, Susan Kansaze, and Ssenkubuge’s mother, Ms Edith Kabasinguzi, Mr Kasozi said the doctors reported at about 8pm that the surgery was successful and the patient would be moved to recuperate in the Intensive Care Unit (ICU).

Slightly after midnight, another doctor informed the restless relatives that the patient was half-brain dead, but they would try their best to resuscitate him.

By this time Dr Obiga was nowhere and in the wee hours of Friday morning, when the last update about Ssenkubuge was provided, and after total payment to save the journalist’s life had grossed Shs5.7m, the medics said they were still struggling to revive him and asked the family to wait until 10am.

However, they vanished at about 9.30am and relatives, including his brother Nelson, after hours of searching for the medical staff in vain, stumbled on a manager at the hospital, who was not a health professional, and they were informed that the medical staff were for their monthly meeting.

This revelation upset the family who protested the information gap and questioned whether Ssenkubuge had died earlier and the delays were calculated to take money from them.

At about 1pm on Friday, Ssenkubuge was taken off life-support, and doctors asked for about half-an-hour to observe if he had been revived, before declaring him dead half-an-hour later. His body was moved to the mortuary.

“Their (Mengo Hospital staff) actions amounted to extortion, considering the exorbitant charges. This is unbecoming of a Christian-founded hospital,” Mr Kasozi, who was at the hospital throughout the family ordeal, said.

When the bill was presented, the doctor’s professional fee had, without explanation, increased from Shs4m to Shs4.6m, and the hospital still asked for the Shs9.9m which they initially charged for the surgery and 3-day treatment although the patient breathed his last barely before a day lapsed.

In addition, the morgue attendants demanded for, and were paid, Shs200,000 for the two hours before the body could be released.

Presented with the litany of events, Mr Denis Bwanika, Mengo Hospital spokesman, without addressing the specifics, said the allegations of negligence and extortion levelled by the deceased’s relatives and friends against the institution were false because “we consider patients health and safety first.”

At Ssenkubuge’s burial in Busukuma in Wakiso District on Saturday, his mother, Ms Kabasinguzi, insisted that the son would perhaps have survived had the hospital not placed money before saving a life.