Advertisement
By Tony Mushoborozi
More by this Author

For 15 years, Florence Aciro was a street vendor on the streets of Kampala. Her commodities of choice were mangoes, roasted ground nuts, and steamed fresh maize depending on what was in season at the time.
Her area of operation was the last stretch of Lugogo Bypass towards Bukoto, including the area around Kampala International School, near the new mosque, and Kira Road.

Her daily profit ranged between Shs3,000 and Shs5,000. It goes without saying that her means could have been better. But nonetheless, that is how she survived and fed her six children. That, and a lot of prayer.

Today, however, Aciro is waiting to be sworn in as the new Woman LC3 Councillor for Naguru 2 in Nakawa Division.
The 38-year-old mother tells her story with teary eyes, tears of joy and thanksgiving, because (by her own admission) she still can’t believe how good the Lord has been to her.
How did a woman of such means (or the lack thereof) manage to run an election campaign and win?
“Nothing is impossible to God,” she says with confidence.
Aciro (Forum for Democratic Change) won the January 25 Local Council election without spending any money, for obvious reasons.

She won with 555 votes, beating the incumbent (NRM) by more than 150 votes.
Ironically, this major milestone in Aciro’s life was set in motion by the coronavirus-induced lockdown at the end of March last year.
When, on March 30, 2020, the President ordered a 14-day complete lockdown of the country in a bid to curb the spread of Covid-19 infections, it caused a great panic for Aciro.

She says: “I had just paid all school fees for all my six children and I was left without a penny. The day they [children] arrived back home, I sat in my room and cried. I prayed and told God: ‘nothing is impossible with you, Father. Now my life is in your hands. I have no money at all. I can’t make any money because I cannot go vending. I have no food’. I put my life in God’s hands.”

Four days later, Aciro says she had a dream in her sleep.
“I got a dream where I just saw an open road in front of me. That was it. What got my attention was that the same exact dream happened on the second night. And then on the third night, when it happened again, someone told me, ‘do not fear’. At that point, I figured this was a vision. But it was hard for me to understand.”

Fourteen days later, the lockdown was extended by three weeks to May 5. Aciro had hoped to go back to running her street vending business.
The two months that followed (until the lockdown was lifted in July) were very hard to get through. For the first time in a long time, Aciro and her children were not sure of the next meal. One meal a day became the new standard.
“Had it not been for my husband sneaking into town every day and coming back with some money, only God knows how we would have survived,” she says.

Seconded to run for office
Meanwhile, the election fever was simmering across the country. While everyone stayed locked up at home and not even consultations were allowed, even for presidential candidates, the election energy was inescapable.
Aciro was not in the least interested in the elections, let alone presenting herself to stand for office.
“It had never crossed my mind,” she says. “But in July, after the lockdown had been lifted, my friends came to me and said, ‘we want you to represent us in the forthcoming election’. They had met in my absence and discussed this. They had unanimously agreed to convince me. They said I had a heart for the people.”

Most of these women were her fellow street vendors. They knew that not only was Aciro kind and good to people, she had good leadership instincts.
They had seen her mobilise them to go and plead with the judges every time one of them was arraigned before the courts after being arrested by Kampala Capital City Authority (KCCA) law enforcement officers.

These women knew she was a woman of integrity because they had chosen her several times to be the treasurer of their small association.
“In 2016, I led a group of friends to the Ministry of Trade and we managed to register our group as Naguru Women Vendors Coop Ltd. After registering our cooperative, I offered my home as the organisation’s office. So every time we were not vending, we came together to make crafts and to do some catering business,” she says.
These and more were the justifications her friends gave for choosing her.

And when she came back home that night, she got the vision again.
For the first time, she started taking the hint.
She put two and two together.
At this point, Aciro starts reminiscing about her long history with God’s goodness. 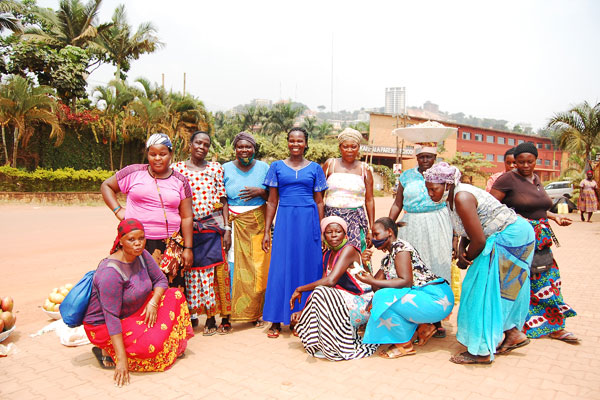 Florence Aciro (centre in blue dress) with some of her fellow vendors pose for a group photo in Kampala on Tuesday.

She says: “Around 2003, while living in Mucwiny Internally Displaced People’s camp [in Kitgum District] because of intensified rebel activity back home, I enrolled for a tailoring course at Blessed Comboni Vocational School, Padibe. I had to walk a distance of seven miles to school. So I had to start the journey before 5am. I knew the journey was extremely dangerous because of the abductions by [Lord’s Resistance Army] rebels but I had nothing to do. Every morning, I would wake up before 5am in the morning and pray to God for protection. And he did. Because I met rebels twice on the way to school but they let me go both times.”

She comes back from her reverie and continues: “So when all these things started happening, I knew God was with me. I told my husband about the vision for the first time. I also told him that my friends had asked me to stand in the election. We discussed the matter. I had no money. My husband had no money. He was not working either. But he was very positive about it.”

Encouraging phone call
A few days later, Aciro got a phone call from a friend who lives in Mbuya, Kampala. Out of the blue, she started talking politics to Aciro, a topic they had never dicussed before.
“She asked me if I knew the person who was going to stand as LC3 Woman Councillor in my area. I told her I didn’t know. She encouraged me to contest. ‘But I stopped in Primary Seven,’ I told her. She told me not to worry about my education. That, to me, was a sign,” she smiles, again with tears in her eyes.

Aciro told her friend that if she was ever to stand for political office, she would stand under FDC party.
She had fallen in love with [former FDC president] Dr Kizza Besigye in 2001 when she was still in the Mucwiny IDP in Kitgum. A seed of politics had been planted in her heart, though she suppressed it. Years later, when Dr Besigye started FDC, she fell in love with the party and had always voted FDC.

“My friend knew someone at FDC Nakawa office. So she called them and told them she was introducing someone to stand in Naguru 2. The Nakawa FDC office called me four days later. ‘We will sponsor you,’ they said. ‘But we need you to pay Shs90,000.’ My husband found the money.  A few weeks later, I got my 1,000 posters and 1,000 hand bills to distribute face-to-face,” she says.

In the next few weeks, the FDC office would connect Aciro to a campaign manager, who would proceed to introduce her to some serious FDC supporters in her neighbourhood.
“Whenever I called them asking them to be my agents, they would not believe. They knew me as a mere fruit vendor. No one expected me to go through with it. Neither did I. I would tell them: ‘I am not joking. I have no money but I am serious’,”  she laughs.

Election Day
Early morning on the day of the election, her supportive husband came home with some money to facilitate the agents and sent them off.
At around midday, Aciro heard several romours to the effect that the election had already been stolen.
“I told God: ‘this is all on you, Father. I can’t do much about this’. So I entered the house and tried to relax,” she says.

In the evening, calls started coming in. On almost all polling stations, Aciro was winning by a wide margin or slightly behind her opponent. It was becoming clear she was on the way to win the election.
“After collecting all the results declaration forms, we went to the tally centre in Kololo and confirmed that indeed I had won,” she says with joy. “This election was managed by God.”

On the day of nomination, Aciro came home with her friends and to celebrate the achievement, they danced and drunk malwa [local millet brew] at her home, bought by her husband. In two weeks she had attracted about 10 people willing to be her agents.
“I had no money to facilitate my agents to go and campaign. So I would cook for them a meal, mostly on Sundays when people were home. We would go and campaign, door-to-door, for about four hours on Sundays. We would come home together and I would serve them the meal. That was how I facilitated my campaign,” she says.

A few months into the election, all of Aciro’s agents suffered burn out. They were tired of working on empty stomachs. Some were reportedly bought off by her opponents to weaken her. So she just resigned herself to God, again. A week before January 25, Election Day, Aciro had no agent.
“Even my friends shunned me. So I prayed: ‘God, shame Satan. He has done this to me. Let your name be known in Naguru’. That night, a man with a hidden face came to me in a dream and touched my arm and told me three times: ‘Get strong people to take care of your vote.’ He said it three times. I told him: ‘You go and touch them for me. Let them come to me.”

On Thursday last week, the government tabled before Parliament a list of 177 people deemed missing. It said the persons were either on remand or...

The incident which occurred at around 5.45am on Monday morning involved two commuter taxis and a Boda-Boda