Two members belonging to the Jobless Brotherhood pressure group have this morning dropped piglets at Parliament to protest the government’s decision to award Members of Parliament with Shs200m each for new cars.

Mr Joseph Mubiru and his colleague Ferdinand Luta arrived at Parliament at 9:50am with about 10 piglets in four sacks. Contrary to the previous occasions, the pigs this time were painted in two colors- yellow and blue allegedly to signify the two main parties – National Resistance Movement (NRM) and Forum for Democratic Change – in Parliament.

Upon arrival, the pair opened the sacks, letting loose the piglets to roam around the premises. However security officers moved to thwart the protest, arresting the youth and their piglets.

This is the second time that the Jobless Brotherhood members are protesting with pigs at Parliament. In July 2014, 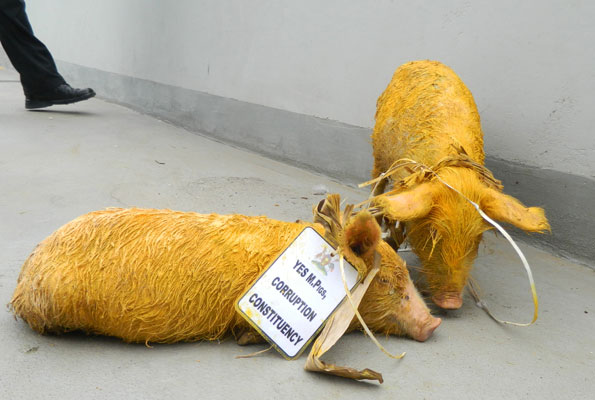 Parliament security including regular police, Criminal Intelligence and Investigations Directorate officers and members of the Special Forces Command attached to Parliament arrested the two young men and detained them.