On a Saturday afternoon at Barogole Centre, Ojwina Division in Lira City farmers from as far as Amolatar, Abim, Kitgum, and Pader districts trickle in at Mr Philip Mulangira’s store to sell chilli pepper.

To manage the big turnout, the buyer, Mr Mulangira lines up the farmers before his workers comprising about 10 people pour the chilli down on a tarpaulin for sorting. The sellers include women, youth, and older men. Once their chillies are sorted and paid for, they walk out of the stores with smiles on their faces as Mulangira cautions them to put the money they get to good use.

At 31, Mulangira, from Kigasi village in Kanungu District is one of the only three produce dealers in Lira who buys and processes the pepper.

Every day, he handles an average of 10 farmers who stock in averagely 500 kilogrammes.

Upon graduating from Kampala International University in 2013 with a Bachelors of Journalism and Mass Communication, Mr Mulangira worked for a local radio in Masaka Town but was compelled to abandon the job and relocate to Lira to try out chili growing and processing.

“My passion was to serve in the media but when I worked for radio, the radio owner turned out with excuses telling us how he did not have money to pay our salaries yet my parents and siblings were depending on me, so I needed to think outside the box,” says Mulangira who abandoned journalism in 2014 to venture into bird’s eye and bullet chillies. Mulangira is now producing more than 50 tonnes of the crop a season.

New in Lira town, Mulangira did not know where to start from. But based on his uncle’s advice, he knew he would never go wrong with the venture since Lango area was a virgin land then as far as chillies processing and buying were concerned.

Since chilli is not a commonly grown crop such as maize or beans in both Lango and Acholi, Mulangira says he started by creating a pool of farmers besides himself, who would be willing to invest in the crop, grow and sell to him.

Initially, it was not easy for him because farmers were not willing to embrace the new enterprise. He managed to convince only eight farmers in both Pader and Lira districts to grow chillies based on purely organic practices with the hope that the rest of the farmers would copy from them.

“To convince them, I gave them free seeds and supervised them until harvest. I wanted them to succeed and reap big from their first harvest so that the rest of the doubting farmers would now follow from their examples, thank God they emerged very successfully,” he said.

The following year 2015 the number of farmers who were interested tripled although soon his capital was depleted.

That year, Mulangira was able to raise 500 kilogrammes of chillies from the 11 farmers who took up the venture. However, he now has more than 65 farmers he directly supervises and they sell their produce to him throughout Acholi and Lango regions. 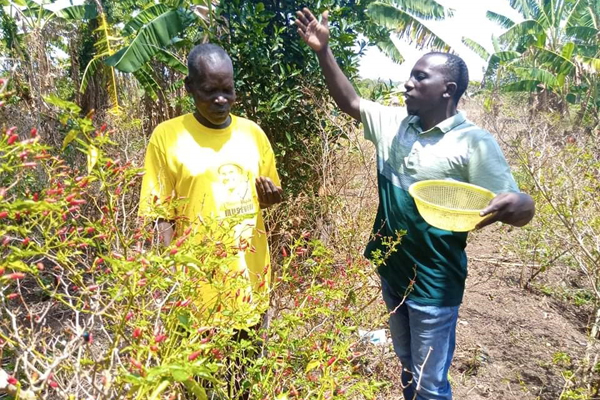 “Sourcing and mobilising the farmers was a tough job at the start prompting me to go through the local church structures in order to get the farmers. After seeing how chillies can change lives, others increased their production sizes and now I have many farmers in my chain,” he said.

Mulangira is currently harvesting five acres of chili he planted at Acolpii in Pader District and expects to reap about 15 bags. He says currently, a farmer can harvest a bag of chillies alone although, in the beginning, a single bag would be harvested by six different farmers.

The farmers he contracts are taught to know that post-harvest handling in chillies’ value chain is the most significant.

“That is why I introduced price discrimination. The farmers know that I buy good quality chillies at Shs17,000 per kilogramme and I challenge them on this by paying Shs4,000 for the bad chillies. So, a farmer fights against losing Shs13,000 and ends up producing the best,” he said.

“We have so far contracted more than 50 farmers in Lira, Pader and Amolatar to supply us with the produce but some of them are inactive and cannot meet the demand due to challenges such as drought, attack by pests and diseases,” said Mulangira.

Once he buys the chillies from farmers, Mulangira moves the consignment to his stores located at Owino market in Kampala from where he sells to direct exporters at between Shs19,000 and Shs21,000 per a kilogramme of the first-grade chillies.

According to him, “buyers demand purely organic chillies meaning that I have to conduct regular visits to farmers in order to ensure that they do all it takes to produce organic chillies and avoiding the use of certain pesticides and chemicals during production.”

Mulangira exports first-grade chillies to South Korea, Italy and Nigeria through their agents who are based in Uganda. He, however, adds value to the second grade upon sorting them.

“Once the sorting is done, the grades are separated. To handle the second grade of chillies that cannot be exported, I decided to invest in a processing machine that grinds the chillies into powder,” Mr Mulangira said.

In 2018, he acquired a processing machine worth Shs6m from Kenya. The machine grinds and mills the sorted chillies into a fine powder without adding anything to it.

“The market for powered chillies is there in abundance, I sell it locally here at our local markets of Lira Town, in Acholi, Teso, and Central Uganda. Clients in neighbouring countries of Kenya, Tanzania, and South Sudan equally place orders for the same and they are delivered by courier,” he reveals.

Last year, 2019, Mulangira exported 28 tonnes of chillies and processed and packed the rest for sale locally out of his total 29.5 tonnes of gross stock.

The demand and consumption of chillies on the Ugandan market has steadily been increasing despite low production.

According to Mulangira, the high demand justifies his vision to invest in a bigger and an industrious machine in order to increase his output since many farmers have been mobilised.

“I want to buy a bigger machine later this year, it will cost me about Shs14m. The market is available but I lack the capacity to meet the demand for processed chillies,” he says. He also intends to increase the number of farmers who grow chillies under his chain as he steps up the quantity he processes once the machine is availed.

In his society, Mulangira’s enterprise has not only changed his life but also the lives of the people around him who earn their daily bread from working at his store.

“I have seven staff who help me in coordination, training farmers, and sourcing for the product and are paid monthly salaries whereas at least 10 people come to the store to do sorting and are paid at least Shs10,000 per day for the job done,” he says.

He has also bought a combined 10 acres of land in both Lira and Pader districts where he now grows chillies and other crops.

“My first achievement in the value chain has been sustaining the enterprise not to collapse. From growing and processing chillies, I bought land in 2016 and finished my new house at the beginning of 2019 where I have settled my wife that I married using proceeds from the same enterprise,” he said.

Last year, he diversified to open a wholesale and retail shop at Barogole Centre which his wife runs.

Besides the achievements he has scored, Mulangira is faced with several challenges.

Quality control remains a challenge according to him. He says most farmers he works with are too poor to afford post-harvest handling facilities which affect the quality of the products they deliver at the store.

“However, we are trying to solve this by giving these farmers subsidies and soft loans to buy these facilities and I recover that money at the time they are selling the produce to me,” he said.

He also faces competition from dealers with a large capital base who hikes the prices of chillies. For example, last year Mulangira said some of the farmers he supported with seeds and loans ended up selling their stock to other dealers who offered higher prices for the crop.