Advertisement
By Derick Kissa
More by this Author

A 70-year-old woman is among 10 people who have been charged with unlawful possession of government stores following their arrest in Lugazi municipality.

Ms Florence Namuddu, a tailor was arrested in a police operation on Monday. She was found at her shop with a red piece of cloth that’s said to resemble military attire.

Other suspects include Godfrey Kagulire, Rotana Hajarah, Felister Ahisibwe and John Mwanje who were arrested after police allegedly found them wearing red berets and clothes similar to those gazzetted for armed forces. 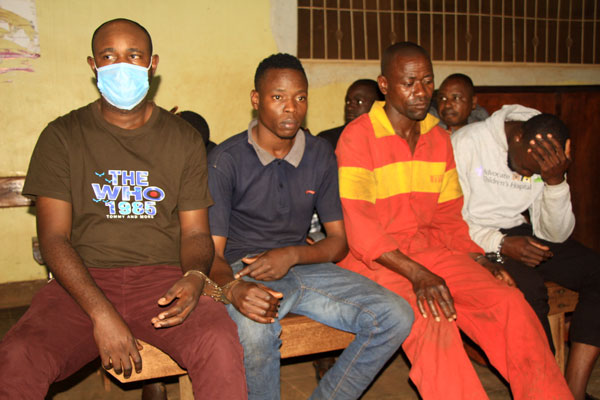 Some of the suspects in court

Some of the evidence presented by police during Tuesday’s court proceedings included 14 red trousers, five t-shirts that were designed like UPDF attires, two red berets, one black beret, two skirts and one red shirt.

All the suspects were arraigned before Lugazi grade one magistrate, Mr Wilberforce Egesa and charged with one count of unlawful possession of government stores.

Mr Kagulire pleaded guilty and asked court for leniency while the other nine denied the charges.

Their lawyer, Ms Dianah Banduru, asked court to release them on bail arguing that the case they are charged with is bailable.

"Even if the case is about security, it does not stop them from applying for bail. Additionally, a breast feeding mother, an elderly woman aged about 70 and some people that are on medication are among the suspects. We request the court to look into that to grant these people bail," Ms Banduru argued.

They were each granted Shs200, 000 cash bail after presenting sureties who were each bonded at Shs1 million, not cash.

The suspects' sureties pictured collecting money for their bail

However, it took relatives and friends of the suspects several hours to raise the bail money which they did not have at hand.

Ms Banduru told journalists outside court that police actions of arresting “innocent Ugandans simply because they were wearing red colours worn by some opposition politicians is unfortunate and very unfair.”

The red berets which have for a while been synonymous with presidential aspirant, Robert Kyagulanyi's people power movement, were in September 2019 gazetted as attire for the army.

Caught in the riots: Tales of bullet victims

Most victims were apparently not part of the demonstrations

Has security taken over election process from EC?