The Judiciary has unveiled uniforms to be donned by all support staff as one of the key strategies aimed at curbing corruption clogged within the justice dispensing system.

This, a according to the Permanent Secretary of the Judiciary, Mr Pius Birigimana, indicates that there’s a deeper commitment by the Judiciary to fight the vice.

“It takes a lot of imitative to fight corruption and this is one of the many measures we have as the judiciary on fighting the corruption. We are going to practice what we are preaching. So whoever is found doing so will be dealt with mercilessly,” Mr Birigamana said.

The uniform that comprise long sleeved and short sleeved purple shirt and T-shirts for each staff member, will be issued to the drivers, court clerks and process servers among other support staff.

The issuance of the uniforms will be done in a phased manner starting with courts in Kampala metropolitan area before rolling out to courts in other parts of the country later. 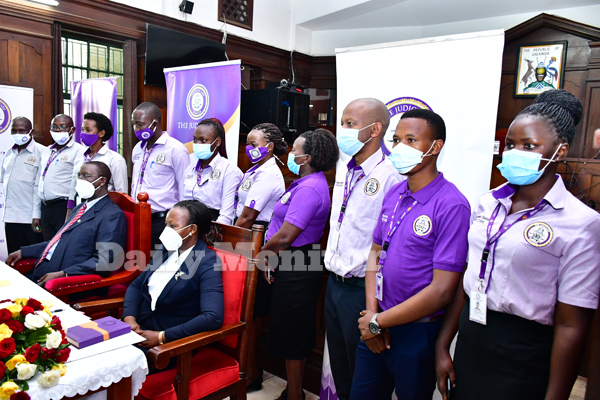 When asked why the initial focus had been placed on support staff, Mr Bigirimana said “this is done as a recommendation by the Inspector General of Government (IGG). They recommended that they be given uniforms to lessen on the gaps used by corrupt officials.”

In her remarks, the Chief Registrar of the Judiciary, Ms Sarah Langa Siu welcomed the initiative saying it will help in identifying imposters at court.

“This is done to separate us from the bush lawyers and make it easy for the public to identify court staff and imposters,” Ms Langa said.

President Museveni promised a lot in kisanja hakuna mchezo and is making even firmer promises as he prepares to swear in for another term. We...

Museveni’s road to 40 years in power: The challenges ahead

There are so many other challenges that lie in wait, which have to be dealt with given that they will have a bearing on the 2026 election