One person has been confirmed dead and five others seriously injured after a joint force of soldiers and police fired teargas and bullets to disperse protesters at Central market in Entebbe and Wakiso tally centre. 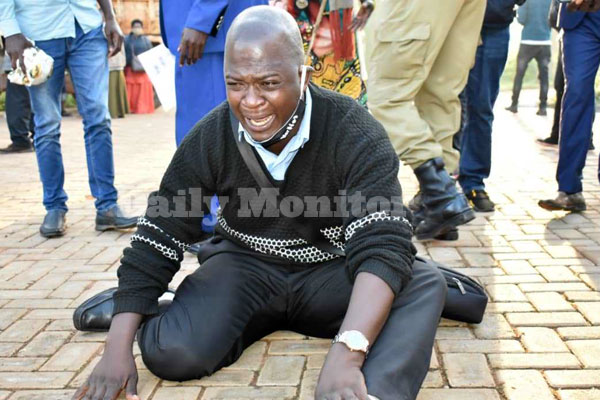 A man reacts after EC officials in Wakiso District on Tuesday declared what he said a wrong winner for Entebbe Mayoral race. PHOTO/ BENSON TUMUSIIME

Some of the protesters argued that by 12am, Rulinda was trailing in third position with 2,825 behind NRM's Kabwama Mutebi with 5,257 and incumbent DP's Kayanja De Paul with 5,672.

However, they say they were surprised when the returning officer, Mr Tolbert Musinguzi who was guarded by security forces announced Rulinda as winner.

The SFC soldiers who had been deployed to calm the situation in Entebbe fired live bullets at the protestors killing one Eric Kyeyune, a boda boda rider and the NRM chairman Kitubulu Katabi. Two others were injured in the shooting and rushed to hospital.

At Wakiso tally centre, a combined force of police and the army fired teargas and bullets after protests broke out following Mr Musinguzi’s results. Three people were injured in the scuffle.

According to the official results released by Mr Musinguzi on Tuesday morning, Rulinda won with 6,703 votes, followed by the Mr Mutebi who polled 6, 342 votes.

In third position came incumbent and DP’s Kayanja who garnered 5,576 votes. Others in the race were; National Unity Platform (NUP)’s Olive Nassuna who got 2,499 votes, Alliance for National Transformation (ANT)’s Kenneth Ssimbwa with 45 votes, former Entebbe municipality MP Muhammad Kawuma who got 521 votes and Gerald Muwonge with 13 votes.

Mr Kayanja and his supporters in both Entebbe and at Wakiso District tally spent a night celebrating victory only to be shocked by the EC official results on Tuesday morning.

According to their tally sheet, they had led the race with 5,672 votes and the runner up posting 2,825 votes. 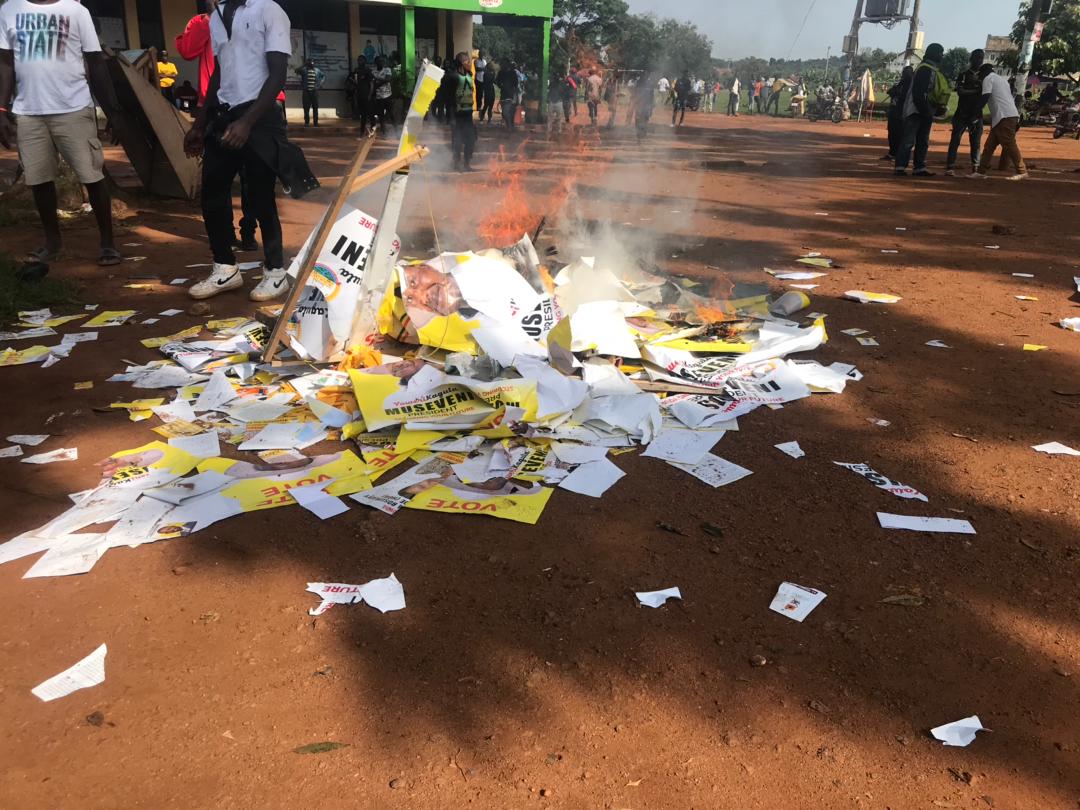 Moments before the results were announced at Wakiso tally centre, Mr  Kayanja complained about the tally sheet projected on the screen as they were not matching with what his team had tallied. Upon, declaration, chaos ensued with a team of councilors from Entebbe and their supporters from other areas protesting.

The Wakiso scuffle that lasted for over 30 minutes left three people severely injured and  were rushed to nearby clinic for medical attention .

The tally centre was then cordoned off and all councilors were thrown out and pushed almost 150 metres away. More soldiers were deployed and mounted over five check points in between Wakiso town and the district headquarters to stop a group of youth who were matching towards the tally centre.

In an interview with this reporter, Mr Kayanja who was shedding tears said his victory had been robbed at gunpoint

"I appealed to the returning officer to recount. But Mr Musinguzi, advised me to file a formal petition to the Electoral Commission which could be handled after other municipalities are handled," Mr Kayanja said.

Mr Kayanja added that in all the elections that started January 14, losers have been declared as winners, but after mounting pressure and presenting evidence in form of declaration of results forms, the pronouncements have been turned which wasn’t the case this time around. 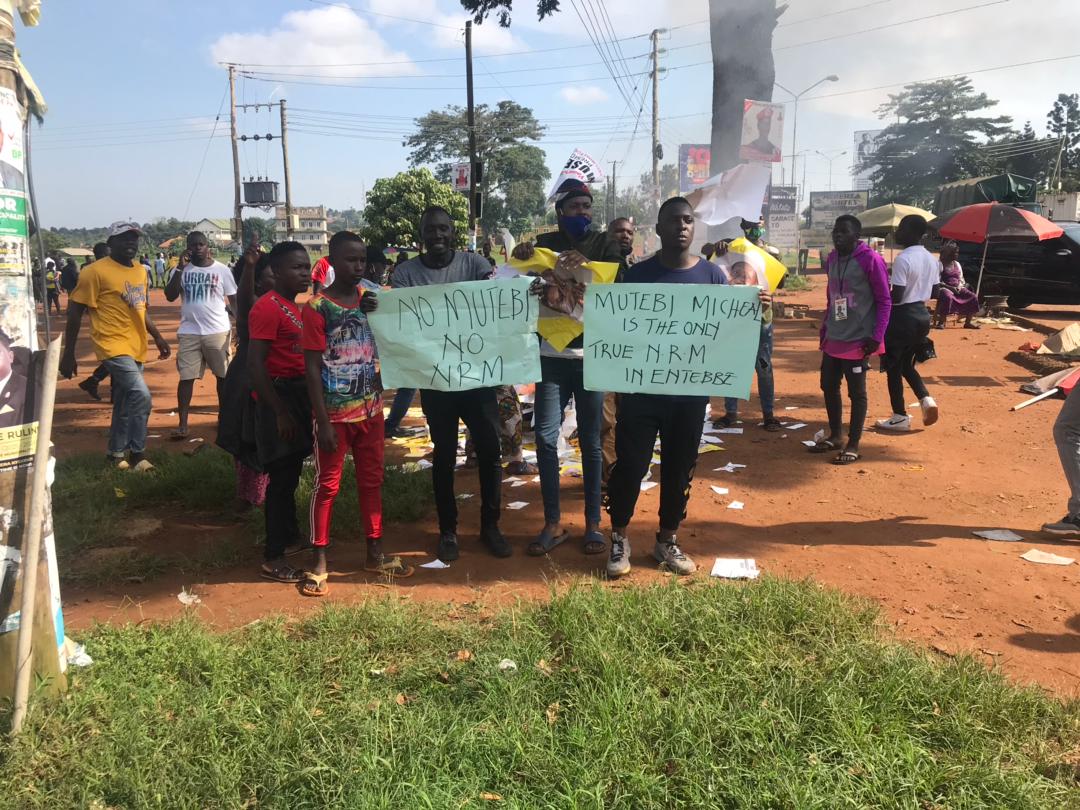 Elsewhere, National Unity Platform has scooped the mayoral seats in Kira, Nansana and Makindye-Ssabagabo Municipalities and also gained dominance in municipality councils which had initially been in NRM’s grip.

Kampala Mtropolitan deputy police spokesperson, Mr Luke Owoyesigyire said Entebbe Police received information from a one only identified as Dr Peter, a medical officer attached to Emmanuel Medical Clinic, Entebbe municipality that a one Kyeyune Erica, a boda boda rider had been shot by a yet to be identified person, rushed to Emmanuel Clinic where he was pronounced dead.

“It is alleged that the incident happened at Entebbe Central Market where the deceased is believed to have been part of the riotous group who were protesting the declaration by the Wakiso returning officer of Mayoral aspirant, an independent candidate in the race for Entebbe Municipality, a one Fabrice Rulinda as the winner of the Monday Mayoral elections. This was to the dismay of the electorates who were sure the NRM flag bearer, a one Michael Mutebi had sailed through as per the provisional results at the divisional electoral offices,” Mr Owoyesgyire said.

According to him, Entebbe police and the sister security forces are doing what it takes in engaging the rioters.

“Body already rushed to city mortuary pending postmortem. Crime scene yet to be visited, inquiries at hand,” he added.