Brazil registered more than 4,000 Covid-19 deaths in 24 hours for the first time Tuesday, the health ministry said, as the country reeled from a surge of infections that has made it the current epicenter of the pandemic.
The coronavirus claimed 4,195 lives in the deadliest day of the pandemic yet for the hard-hit country, whose total reported death toll is now nearly 337,000, second only to the United States.

Brazil's health system is buckling under the strain of the latest virus wave, which has forced doctors into agonizing decisions over which patients to give life-saving care and led cemeteries to hold nighttime burials to deal with the crush of coffins. 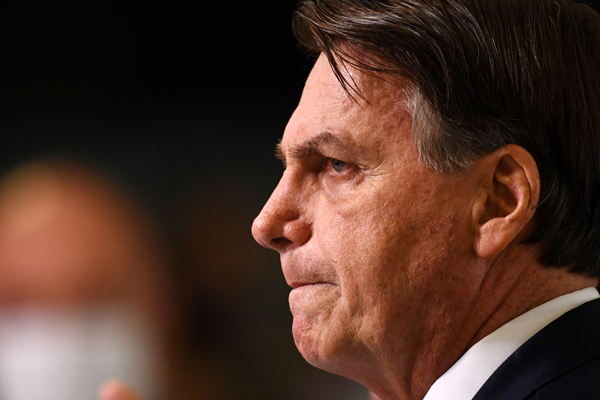 "We're in a dreadful situation, and we're not seeing effective measures by either state or federal governments" to respond, said epidemiologist Ethel Maciel of Espirito Santo Federal University.
"At the rate we're vaccinating - 10 percent of the population (with a first dose) so far - the only way to slow the extremely fast spread of the virus is an effective lockdown for at least 20 days," she told AFP.
"Unfortunately, politics has brought us where we are today: This enormous number of people who have lost their lives. Very sad."

The health crisis appears to be turning into a political one for President Jair Bolsonaro, who long flouted expert advice on containing the pandemic and now faces mounting pressure - including from allies in Congress and the business sector - to bring the situation under control.

Patients affected by the COVID-19 coronavirus remain at a field hospital set up at a sports gym, in Santo Andre, Sao Paulo state, Brazil on March 26, 2021.

Now on his fourth health minister of the pandemic, the far-right president overhauled much of his government last week, replacing his foreign, justice and defense ministers and naming new army, navy and air force commanders.
The move has raised concerns the president is digging in for political turmoil as he gears up to seek re-election next year.

Dangerous variant
The country of 212 million people has registered an average of 2,757 Covid-19 deaths per day over the past week, the highest by far worldwide.
It has recorded 160 deaths per 100,000 people, behind countries such as the Czech Republic (254) and Britain (187) but still one of the 10 highest rates in the world. 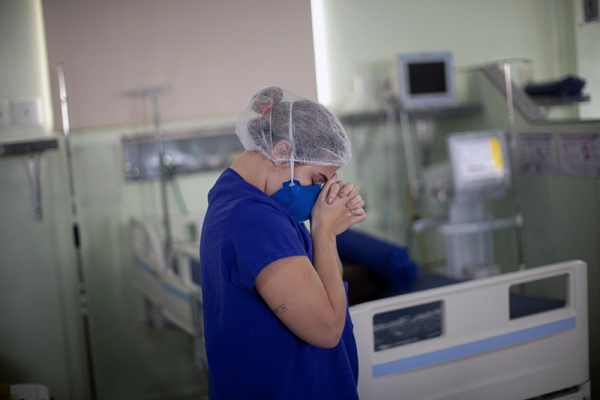 A hospital worker prays as health workers from the Portuguese charity hospital in Belem, Para State, Brazil, sing and pray for colleagues and COVID-19 patients inside the hospital wards and ICU areas as part of Easter celebrations, on April 4, 2021.

Intensive care units are currently more than 90 percent full in 18 of Brazil's 27 states, according to public health institute Fiocruz. All but two of the rest are in the "critical alert zone" of more than 80 percent occupancy, it said.

Experts say the surge is partly caused by a local variant of the virus known as P1 that can re-infect people who have had the original strain and is believed to be more contagious.
The government has meanwhile struggled to secure enough vaccines, at times forcing authorities to suspend immunization drives in some areas.