A recent police arrest of two suspects accused of killing a special hire driver in Mbarara, James Ahimbisibwe, could have nipped in the bud, the activities of one of the most notorious cartels operating in the savannah region.
This region covers the districts of Luweero, Nakaseke, Nakasongola, and Wakiso. Police say the cartel could be behind a number of crimes, including 10 killings, although investigations are underway.

On April 4, Simon Rutasingwa and Mike Ssonko pretended to be passengers and hired Ahimbisibwe from Buremba stage in Mbarara.
“They approached and indicated to him that they wanted his service---from the friends that operate the business with him, he took passengers. It was around 10am when the colleagues were not seeing him return so they thought he was busy until they realised that he never returned home,” Mr Charles Twiine, the spokesperson of the Directorate of Criminal Investigations, said.

They killed him and dumped his body in a swamp at Kasana, Luweero. Residents called police, who buried him at a public cemetery at Kasana hospital, without a postmortem
“It’s an obligation of police to examine the body, so the body was buried in the hospital cemetery and police in Luweero registered a case of Death Enquiry File (DIF),” Mr Twiine told Daily Monitor.

Last Friday, Police exhumed the body from the public cemetery.
“Affidavits were sworn and an exhumation order was given by the magisterial area of Mbarara to the police officers of Mbarara, they came here and worked with the director [police] of medical services and proceeded to Kasana. So they reached there and he was able to show them the body wrapped in a bag, which they took to Mulago [hospital]. It was expeditiously examined and a postmortem done and the doctor confirmed that the cause of death was unnatural by external forces.”

On April 10, the Police Flying Squad Unit received a tip that there was a man at a washing bay in Busega, Kampala, who was selling a Toyota Wish at Shs4m.
“A Toyota Wish [UBF] being sold at 4m was inconceivable because it looked visibly and conspicuously clear that the car was still in good mechanical condition even to these ordinary people,” Mr Twiine said. 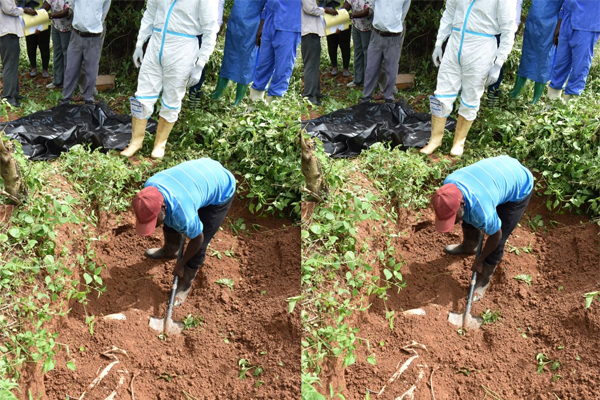 Police exhume the body of James Ahimbisibwe, a special hire driver in Mbarara, who had been buried Luweero Hospital cemetery. PHOTO/courtesy

“We are also looking at some murders that took place around that place [Savannah]. There are some killings where we failed to succeed in apprehending the suspects, but looking at their modus operandi, we want to establish if they are related, I wouldn’t want to conclude, we have murders about 10 that were done between 2018 to 2021,” he added.
One of the men, only identified as Umar, who works at a washing bay in Busega revealed that on the day Rutasingwa was arrested, he washed the stolen car, whose seats were soaked in blood.

“When I opened the car, it was so smelly, it had blood and there was a knife. I used to wash his cars [Rutasingwa] in the past with lots of blood,” Umar told Daily Monitor on Saturday. It is not clear yet why Umar did not in the past report such incidents to police.
Police have also gathered evidence and are seeking to prosecute the duo over the killing of Juliet Namusoke, the step-mother of Rutasingwa.

“We have heard and we have also known that in Kikyusa Sub-county, Mugerwa the father of Simon Rutasingwa married Juliet Namusoke. The elder children of Mugerwa particularly Rutasingwa, threatened to kill the father and step mum,” Mr Twiine said.
When Rutasingwa’s father relocated his wife to another place, she was trailed.
Efforts to have the accused arrested were futile as the father revealed that his son, who was once in the army, would kill him.

Mr Twiine continued: “The father moved the wife to another piece of land where she established a banana plantation. Rutasingwa came with Ssonko who proceeded to the banana plantation and purported to be buying matooke at 6pm. The old woman did not return. At 8pm they [family] were curious and found her in pool of blood, they made an alarm, she was still breathing but with multiple cuts on the head, neck and the back, so they took her to hospital in Kasana but she was pronounced dead on arrival.”

Rutasingwa, who had earlier on sold his solar business in Kikyusa Sub-county, Luweero fled the area after the incident.
Police say the duo are part of a wider criminal network, whose puppet masters are benefiting from the proceeds of crime.
“Our intelligence officers are on ground profiling all of them. We are duly aware that there are some people who were benefiting--- they sponsor them to do these acts for economic gain, and we were not able to get this information from the two people in custody, we are using other mechanisms to prove that the two have a big network,” Mr Twiine said.

According the Annual Crime and Traffic Safety Report 2020, theft remains the leading offence in Uganda with 41,950 cases contributing 21.4 per cent of all crimes registered in the previous year.
Mr Twiine said this cartel is behind a lot of violent crimes in the areas of Nakasongola, Luweero, Busiika and Busukuma.  “Gayaza has been a den of robbers, this is one of the gangs.”
One of the major crimes the duo is being investigated for involves cattle theft.

In June 2020, senior officers in Uganda Police Force sanctioned a probe into rampant cattle thefts in the savannah region. The team was led by then deputy Inspector General of Police Sabiiti Muzeeyi.
A meeting held on June 25, 2020 in Luweero Town, which was addressed by Sabiiti was also attended by the Chief Political Commissar of Uganda Police Force Asan Kasingye, the Director of Criminal Intelligence and Investigations Grace Akullo, Director of Operations AIGP Edward Ochom and other commissioners of police.

The probe was prompted by a directive issued by President Museveni during the Heroes’ Day celebration on June 9 after residents complained about rampant cattle thefts. The matter had been brought to the President’s attention by Mr Edris Sseddunga, the chairperson of the Uganda War Veterans Association.
Records show that hundreds of cattle were stolen in Nakasongola District in the areas of Nabiswera, Nakitoma and Lwabyata.

Earlier in March, the Flying Squad Unit with assistance from Special Forces Command, and the Chieftaincy of Military Intelligence, the UPDF 1st Division Kakiri and Savannah Regional team, arrested the prime suspect and team leader of another notorious criminal gang that was actively involved in aggravated robberies and related killings in the districts of Luweero, Nakasongola, and Nakaseke. The prime suspect identified as Stephen Kisule, was raided in his hideout in Bombo on February 2 and detained alongside his accomplice Samuel Mawejje.

The searches at their residences led to the recovery of a pistol with two magazines and 17 rounds of ammunition, that they robbed from the late Maj Noel Mwesigye, an SMG gun with two empty magazines, 17 mobile phones and a motorcycle.
Mwesigye is a former commander of the Special Forces Commando Unit. He was killed on January 17 at Masinga Village, Kikyusa Sub-county in Luweero District.
Police are yet to establish whether this gang involved in the killing of the SFC officer has links to Rutasingwa and Ssonko.