Seven Ugandan fishermen have reportedly been shot dead by Congolese militiamen on the Lake Albert.
Authorities say the attack happened Saturday evening near Kaiso Landing site in Buseruka Sub County, Hoima District.
The deceased are all fishermen attached to Kaiso landing site. One other person was injured in the attack and is now admitted to Hoima Regional Referral Hospital.

It is alleged that the fishermen were attacked by suspected DRC Militiamen as they went to search for the body of one of their colleagues who was reportedly cut into pieces and dumped into the Lake by the same group on Monday.

Mr Robert Mujuni, the representative of the fishermen at Kaiso Landing site told URN that the situation on Lake Albert is worrying and fishermen are now fearing for their dear lives. He added that the security of the lake has been taken over by the suspected Congolese Militia.

"It is a big tragedy. As our people went to search for the body of a colleague who was attacked by the suspected militias, they were also attacked and seven of them died. Despite the presidential directive on deployment of UPDF on the waters nothing much has changed. A lot of our property have also been confiscated by the suspected militia group from Congo. Let government intervene for the safety of our live," Mr Mujuni said.

Mr Ibrahim Odongo, a fisherman at Kaiso Landing site who lost an uncle in the Saturday attack explained that life on the lake has become very difficult following the attacks that have left scores of people killed in a period of one week. He urged for immediate government intervention to address the situation on the lake. 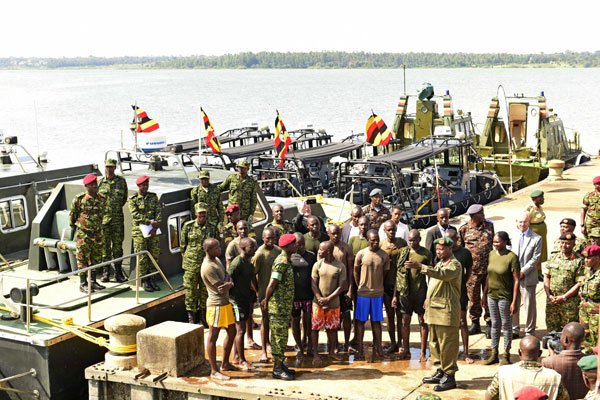 Mr Museveni early this year said he had heard public outcry of brutal army operations, but said the exercise had resulted in renewal of fish stock

Mr Amos Muhindo, the second in command at Kaiso Landing site police post said the Saturday attack was carried out by more than five suspected militiamen dressed in Congolese army uniform. They were all armed with guns.

"The relatives went there to search for the body and as they were searching, they were attacked by armed men from DR Congo. They started firing at them. Seven of them are feared to have died. Only one person survived and he's in hospital. This brings to 12 the number of people who have died in just one week. In the first incident, the assailants used arrows but today (Saturday), they were armed with guns and they were putting on DR Congo army uniform," he said.
Deo Obura, the Albertine region Police Commander said police had launched investigations to ascertain the root cause of the attacks. He said the relevant security offices in the country have been alerted about the Saturday attack.

"We have also received the same information. We have launched investigations and shall follow the necessary procedures to ascertain how and where they were attacked. If we cannot handle, we shall refer to the relevant authorities to handle," he said.
The latest attack brings to 12, the total number of fishermen who have been killed by the suspected Congolese militiamen in just one week.

On Monday, the group attacked and cut into pieces five Ugandan fishermen on the Lake Albert waters before dumping their bodies in the water. Two people were critically injured during the attack and were rushed to Hoima Hospital where they are currently nursing severe wounds.