Journeying through rural Sembabule District is both laborious and exciting. The bumpy roads, slippery on rainy days and dusty on dry days, and refreshing tracts of green acreage, from farmlands to thickets, are the hallmarks of the trip.
Sembabule, home to several top shots in government, is bordered by Mubende to the north, Gomba to the northeast, Bukomasimbi to the east, Lwengo to the south, Kiruhura to the north-west, and Lyantonde to the southwest.

To the northeast, River Katonga separates Sembabule and Gomba. On Sembabule side, in Rugushuru Sub-county, the expansive tract of farmland adjoining the river is owned by a senior Cabinet minister. The expansive idle farm land on Gomba side is owned by a top Electoral Commission official.
The East African crude oil pipeline (EACOP) will be stretching through both farms. It will be moving via Gomba, from Hoima, Kikuube, Kyankwanzi, Kakumiro and Mubende districts, through Sembabule to Lwengo, Kyotera and Mutukula Town (Rakai District) at the Uganda-Tanzania border.

The Ugandan section of the pipeline is about 296km and passes through 10 districts, 25 sub-counties and 172 villages, of the total length of 1,443km from the proposed pump station in Hoima to Chongleani terminal near Tanga port on the Indian Ocean. 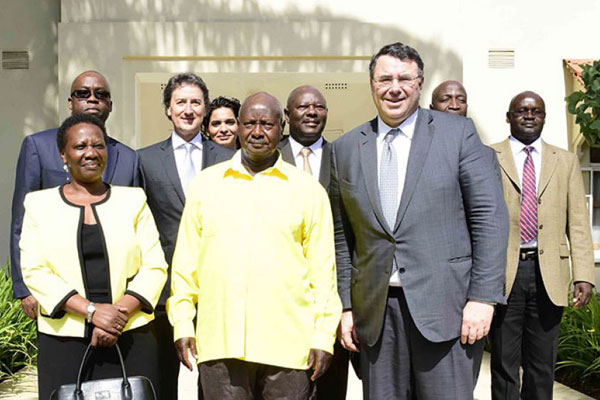 The pipeline will run 1,445km from Hoima in mid-western Uganda to Chongoleani terminal in Tanga at the Indian Ocean

On the Tanzanian side, the pipeline will pass through 25 districts; in Kagera, Geita, Shinyanga, Tabora, Singida, Manyara, Dodoma and Tanga regions.

Uganda and Tanzania in May 2017 signed the Inter-Governmental Agreement (IGA) that binds the two governments on the pipeline project, with a specific clause (Article 3) detailing land rights framework, including fair, transparent, legally enforceable and clear terms in favour of the project, availability of land rights and integrity for the pipeline system, allowing uninhibited implementation of the project, and allowing lenders to take legal, valid and enforceable first priority security.

The IGA, which has since been ratified by both governments, is yet to be fully translated into law and as a result, the issue of land rights remains a sticking issue. For example, the pipeline will cross Lwengo-Kyotera road and 15 other national roads, which land reserves belong to the Uganda National Roads Authority, but under the ongoing plans should belong to the yet-to-be formed pipeline company.

Likewise, the pipeline affects other 46 district roads and 97 community access roads under the respective local governments. It will affect three 132kilovolt and two planned 220v kilovolt electricity transmission lines, whose reserves belong to the Uganda Electricity Company under the Electricity Act. It will also affect a railway line between Sembabule and Mubende under the Uganda Railways Corporation and the Uganda Railways Corporation Act and swamps gazetted under the National Environmental Act. It is expected that the Host Governments Agreement (HGA), whose negotiations are ongoing, will build further on aspects on land in both countries. Before that, the clear land rights ownership remains in limbo. The pipeline project director, Mr Maxim Marchenko, told Daily Monitor that the resettlement action (RAP) studies across the entire route have been finalised and are currently undergoing review by the two governments.

“What we are doing today is have surveys finished, identify all land rights and land user rights owners, and we are reviewing all that,” Mr Marchenko said during an interview. “We have commitments and also to the international banking society to respect the rights of the locals, but also in part to avoid the pipeline intruding in the lives of the people.”

Affected people
The RAP studies indicate that an estimated 10,500 people will be affected by the project in Tanzania. The pipeline construction start date remains unknown owing to a list of agreements yet to be finalised and related activities such as mobilisation of funds and announcing the final investment decision (FID), which will lead to the engineering, procurement and construction (EPC) phase.
According to the resettlement framework report for Tanzania, signed off last September, most land in the project area is held under customary tenure, with registered or titled land being limited mainly to urban centres (avoided by the pipeline route planning).

In total, the pipeline section in Tanzania requires access to more than 9,884 acres; 98 acres for a pipeline coating yard, 86 acres for two construction camps with marshalling yards, 432 acres for 10 construction camps, 182 acres for access roads, among others.
Mr Marchenko said “the good thing” is that project footprint is mainly in areas with low human footprint, which was deliberate.
Initially, both Uganda and Tanzania had approved a 50km wide route corridor. It was gradually reduced to 30 metres on recommendation of the technical front end engineering designs studies, whose report was submitted in December 2017.

Land in Tanzania is a responsibility of the government through the Ministry of Lands, Housing and Human Settlements Development in close collaboration with regional and district authorities. As such, land acquisition is hustle free, for investors. Notwithstanding, the country’s lead negotiator on EACOP, Mr Goodluck Shirima, speaking in Dar-es-Salaam last November, revealed that they were working with the international companies “on a hybrid solution” to ensure local regulations were harmonised with international best practices.
Some of the international best practices, one senior official told this newspaper, include International Finance Corporation Performance Standard 5, which require companies to avoid involuntary resettlement wherever possible and to minimise its impact on those displaced through mitigation measures.

The other standards, which specifically the oil companies have to subscribe to, is the Equator Principles (EP)—a risk management tool adopted by a dozen financial institutions in 37 countries for identifying, assessing and managing environmental and social risks. It states that as a project may be seeking funding from EP-leaning financial institutions, the process for land acquisition, compensation and resettlement must recognise the applicable international standards.
Currently, 55 per cent of the land surveyed for the pipeline in Tanzania is currently used for cultivation: 22 per cent with cultivations interspersed with dwellings: and 23 per cent with no dwellings, little or no cultivation. Cultivation is mostly carried out in the Tanga and Tabora regions while cultivation with dwelling is high in Kagera and Geita regions.

The resettlement framework policy indicates that the cost of land is a function of the area of land to be acquired by the project. For permanently-acquired land, market rates as determined during professional valuation will apply dependent on location and on the category of land (residential land, bare farm land, etc.). For project-affected residential dwellings, owners will have a choice between cash compensation and the provision of replacement structures, while crop owners will be eligible for cash compensation.
Disclosure of rates and holding of consultative meetings for the project affected persons is said to be ongoing.

Mr Marchenko said TPDC will acquire the land for the project and in turn lease it to the EACOP project.
Uganda’s land acquisition law, the 1965 Land Acquisition Act, details steps for acquiring private land. They, among others, include prior planning to determine land for the project, publishing a notice to inform owners/ occupants in a designated area that government intends to acquire their land, and holding consultative meetings to brief the project-affected persons about the project but also for them to express their opinions.

This is followed by payment of “fair and adequate” rates,’ approved by the chief government valuer. Most times, project-affected persons accept the money offered while a few may reject it, either out of intuition that they are being cheated or after engaging private valuation companies, which usually return with hefty sums, leading to protracted negotiations.

A senior official in ministry of Lands, who requested for anonymity, told Daily Monitor that the main problem as has been faced before on other projects like roads and alike, is the failure by districts to develop or keep an updated chart detailing rates of property, from land to crops.
On the 296km-Uganda pipeline section, at least 4,121 persons will be affected, of whom 2,199 are bibanja holders, 1,056 are land owners and 866 are licensees.

Mubende is the most affected, with 33 villages crossed by the pipeline, followed by Kakumiro with 25, Kyotera and Kikuube districts have 20 villages, while and Lwengo and Sembabule have 19 villages each.
Lands minister Betty Amongi said mapping of the pipeline corridor through the 10 districts and compilation of a cadastral report have been concluded, and submitted to the chief government valuer—who is compiling a report for resettlement action plan.
“We are looking at a timeline not exceeding March to finish all our activities,” Ms Amongi said.
In Kabayola Village, Sembabule District, where one of the four proposed main camps for storing construction material will be situated, the family of 19, whose 46 acres was surveyed for the camp, expressed frustration at being told not to undertake any further activities on the land.

“We are worried because the project is delaying. We were told that we could get paid but then if the project takes forever, we are the ones at loss. We cannot farm, build or do anything,” 37-year-old Alice Namukasa, one of the family members, said.

Ms Namukasa revealed that as a family, they reached a decision to settle for Shs20 million per acre, and at least Shs25,000 for the other crops to be destroyed.
“We did not know anything at first and were not selling our land, but they (surveying team) educated us; we also think that our price is fair,” she said.
The head of the district land board, however, indicated that an acre of land, according to the available rates, is priced at Shs4 million while fruit trees are valued at Shs78,000.

For a stump of robusta coffee with yields of 90kgs, he said each kilogramme is valued at Shs2,000. Banana plantations are paid depending on the grade but averagely a bunch in grade one is priced at Shs60,000. This is on top of a 30 per cent disturbance allowance.
During the course of this reporting, several project-affected persons put a high value to their property—land or crops, and yet both the pipeline project team and ministry of Lands say they will pay rates only approved by the chief government valuer.
Of all the 10 districts, only Hoima, ostensibly due to long presence of oil activities, had updated property rates.
This is where the challenge lies and will likely spark off back and forth shuffling when the compensation process commences.

Efforts
The executive director of the Petroleum Authority of Uganda, Mr Ernest Rubondo, acknowledged that land acquisition for the pipeline, being a linear project, will likely face some encumbrances.
“But what makes this different is that you might find that for most people we are just touching their land, and not taking the whole of it,” Mr Rubondo said.
“But also most of these districts have for long been backward. Now this process has lifted them: in one way, it sounds challenging but we shall find away,” he added.

Therein lies another problem of high expectations and hopes. In the greater-Masaka region, which comprises districts such as Lwengo, Kyotera and Rakai, some civil society actors are using the pipeline as a ticket to speak out on government’s long neglect of service delivery in the districts. In effect, they think a lot more should be done in the region on the basis that a multi-billion dollar infrastructure transits through their area, Mr Yisiti Kayinga, who heads a civil society group-COTFONE- told this newspaper in Lwengo.
The resettlement action reports are currently under review to tie loose ends but when the actual land acquisition process starts, that is where the uphill task is; for it has never been in Uganda.

Tomorrow, we take a peek into the lingering environment and social concerns