Advertisement
By ANDREW BAGALA
More by this Author

At around midday yesterday, Kayoola Diesel Coach, which was built by Kiira Motors Corporation and Luweero Industries, a military institution, emerged from the factory dome at Luweero Industries headquarters at Nakasongola District.

The bus, which is the first diesel vehicle built by Kiira Motors Corporation, is majestic and eye catching.
Maj Gen Sabiiti Muzeyi, who is two days old on the job as general manager of Luweero Industries, drove the bus and concluded that it is one of a kind.
“This is one of the products we are cooperating on Kiira Motors (Corporation) to produce. This bus consumes only 22 litres every 100kms and it has a tank that stores 500 litres. You can go 2,000km with no need to refuel,” Gen Sabiiti said while unveiling the bus.

The current buses on market in Uganda use 38 litres per 100kms.
Kiira Motors Corporation plans to produce 1,030 buses this year. The buses will be supplied to Tondeka Bus Service to operate in Kampala City.
“You should make Ugandans know that you need to support these products. We are going to discuss with the government to purchase vehicles from us. It creates internal capacity…We should support our own,” Gen Sabiiti said.

The exterior of the bus looks good except for the visible poor workmanship at placement of front windscreen edges.
The bus main doors open and close automatically. The sanitiser dispenser at the bus entrance also detects human hands and sprays them.
Before we set off from Nakasongola to Kampala City, which is 120kms, one of the Kiira Motors Corporation staff showed us around the luggage compartment. But he had some trouble opening one compartment that got stuck and he had to push in the sides to free the door.

Inside, the bus is spacious with reclining 47 leather seats that have good leg room, swivel armrests, footrests, foldable tables, cup holders and USB charging pots.
Mr Allan Muhumuza, the marketing manager for Kiira Motors Corporation, said the configuration of the seats can be increased up to 60 depending on a client’s choice. 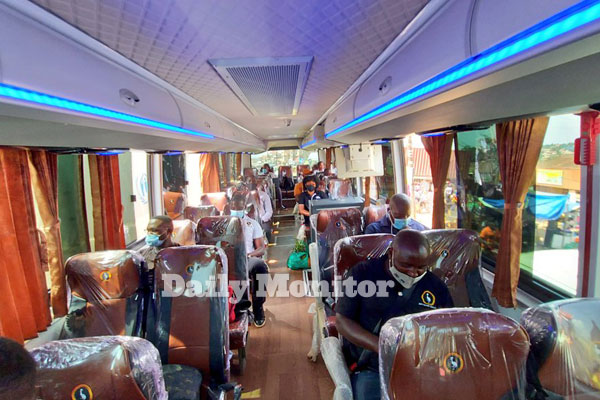 “It has an executive wing room and comfort. Comfort is at the heart of the design. It is a bus that meets the requirement of travellers upcountry, across the border and tourists,” Mr Muhumuza said.
The price of each bus unit is yet to be revealed to the public to determine whether it is competitive compared to the existing brands on the market.

After we started the journey, this reporter closed the window thinking that the air condition (AC) was already active, but a Kiira Motors staff asked him to open it to allow fresh air. It turned out that the bus air condition system was not working. One staff member said the system will be in operation when the bus is ready.
Without AC, the executive wing was very hot, even when the bus was moving given the fact that windows covering the first five rows do not slide. The bus executive wing must have its ACs switched on if VIPs are to have comfort. Many bus owners don’t want use the AC because it consumes a lot of fuel and affects the engine performance.

During the trip, the sound of the engine, which is on the rare side, could be heard rambling even by those who were seated in front. Experts said the buses they will produce will be better by far than one they unveiled yesterday.
The Bill now becomes an Act of Parliament and will become law once the President assents to it.