Advertisement
By Tom Brian Angurini
More by this Author

Government, through Petroleum Authority of Uganda, will launch key tenders for the first development phase of the construction of oil-related facilities in December 2021.

The first phase will include building of a refinery, oil pipeline from Uganda to Tanzania and completion of the oil road network in the Albertan region.
This was revealed by Ms Peninah Aheebwa, the Petroleum Authority of Uganda director technical support services at the launch of youth training programme, especially in the tourism sector.

“The companies that will win key tenders will start construction works at Kingfisher and Telenga wells and later other wells will also be developed in the second phase,” she said, noting government had put in place measures that will ensure that local firms win tenders in some sectors of development while others will be subcontracted.

Sectors such as logistics, she said, are being ring-fenced for Ugandan companies a way of enabling them to build capacity to handle future prospects in the oil and gas sector.

Ms Aheebwa noted that in the logistics sector at least 900 machine operators will be needed while more than 2,700 divers will be required to transporting material, goods and services. 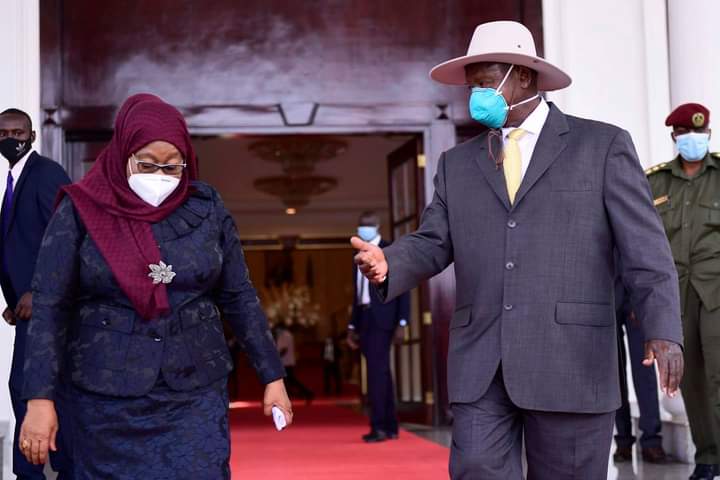 President Museveni welcomes his Tanzanian counterpart Samia Suluhu Hassan at State House Entebbe on April 11, 2021 prior to the signing of the Tripartite Oil Pipeline agreement. PHOTO/PPU

The law demands that where goods and services required by a contractor are not available in Uganda, they shall be provided by a firm which has entered into a joint venture with a Ugandan company provided that the Ugandan company has a share capital of at least 48 per cent in the joint venture.

The first phase will at least create a $15b kitty through which both local and international firms will benefit.
International companies, will be required to sub-contract a portion of project works to local companies, failure of which they will be penalised under Ugandan laws.

Ms Laura Valetine Ukarimu project lead, which seeks to train youth in tourism sustainability, oil-related projects will have a wider impact on Uganda, among which, will include the establishment of infrastructure that will be key to the industry.

“Government has built about 500 kilometers of roads and an international airport in the region so tourist will find it easy to travel both in air and road so marketing should be key for tour operators,” she said.