Advertisement
By Ismail Musa Ladu
More by this Author

Until recently, herbal medicine was regarded as a mix of ‘fake’ concoctions. But this industry, if carefully supported, could complement the country’s primary healthcare.
Despite more than 60 per cent of the population depending on herbal medicine, the government only recently endorsed herbal medicine. Herbal health medicine remains culturally familiar, accessible and affordable.
According to the herbal medicine industry analysis, titled: The relationship between Uganda’s Ministry of Health and a traditional herbalist, its strengths, challenges and its implications for future policy, there has been limited recognition of the contribution from Uganda’s traditional health practitioners to primary health care. This is in part because of the colonial legacy, during which culture was branded as negative and primitive.
The 1957 Witchcraft Act which outlawed traditional medicine and is still on the statute books is a good example of what the industry has been up against over the decades.

Coupled with an education system that rarely values local knowledge, Professor Patrick Ogwang, the owner of Jena Herbals and inventor of the Covidex, in an interview told Prosper Magazine that the environment has not been conducive to spur traditional medicine into a competitive industry.

But the industry remains resilient albeit with low value compared to the pharmaceutical industry - one of the country’s highly specialised economic sectors accounting for over 10 per cent of manufacturing, according to Uganda Investment  Authority (UIA).
According to the managing director of Rene Industries Limited, Mr Rishi Vadodaria, the pharmaceutical sector in Uganda has evolved over the last 20 years in manufacturing pharmaceutical products.
As one of the leading industry players, their assessment of the yearly market value is about $270 million.

Complimentary efforts
Despite government’s support to the pharmaceutical sector over the last two and a half decades, a senior research fellow with Economic Policy Research Centre (EPRC), Paul Corti Lakuma, believes the two sub-sectors shouldn’t be in conflict with each other but instead compliment each other’s role.
In his mind, researcher Lakuma says like the pharmaceutical industry, the herbal medicine sub-sector which falls under part of the alternative health remedies segment, can be reorganised.
“… I don’t think the two are competitors. They supplement and compliment each other,” he said in an interview.
He continued: “Proper regulation and training will ensure safety and hygiene standards required for medicinal products. This will also uplift the alternative medicine segment not as a competitor but a complement.”

More pressing issues
It has further emerged that production costs are high, limiting the growth of industry players. For example, a licence to harvest medicinal material from the forest remains a concern. Then there is also a long search for plants, carried out on foot or using a bicycle when ferrying bulky items.
After processing, products are stored in plastic containers and used bottles, for sale. Many have opened several retail outlets, but all closed down because of mismanagement, weak supervision and dishonest shop attendants.

Intellectual property rights are another growing concern. Most herbalists have been disregarded right from the colonial and post-colonial periods. So some traditional healers are now suspicious of the motive of those who have suddenly developed an interest in their knowledge.
And then concerns around environmental protection. Herbal gardens can provide easy access to medicinal plants. They can preserve rare and commonly used species while conserving the environment, creating employment for traditional healers and small farmers. 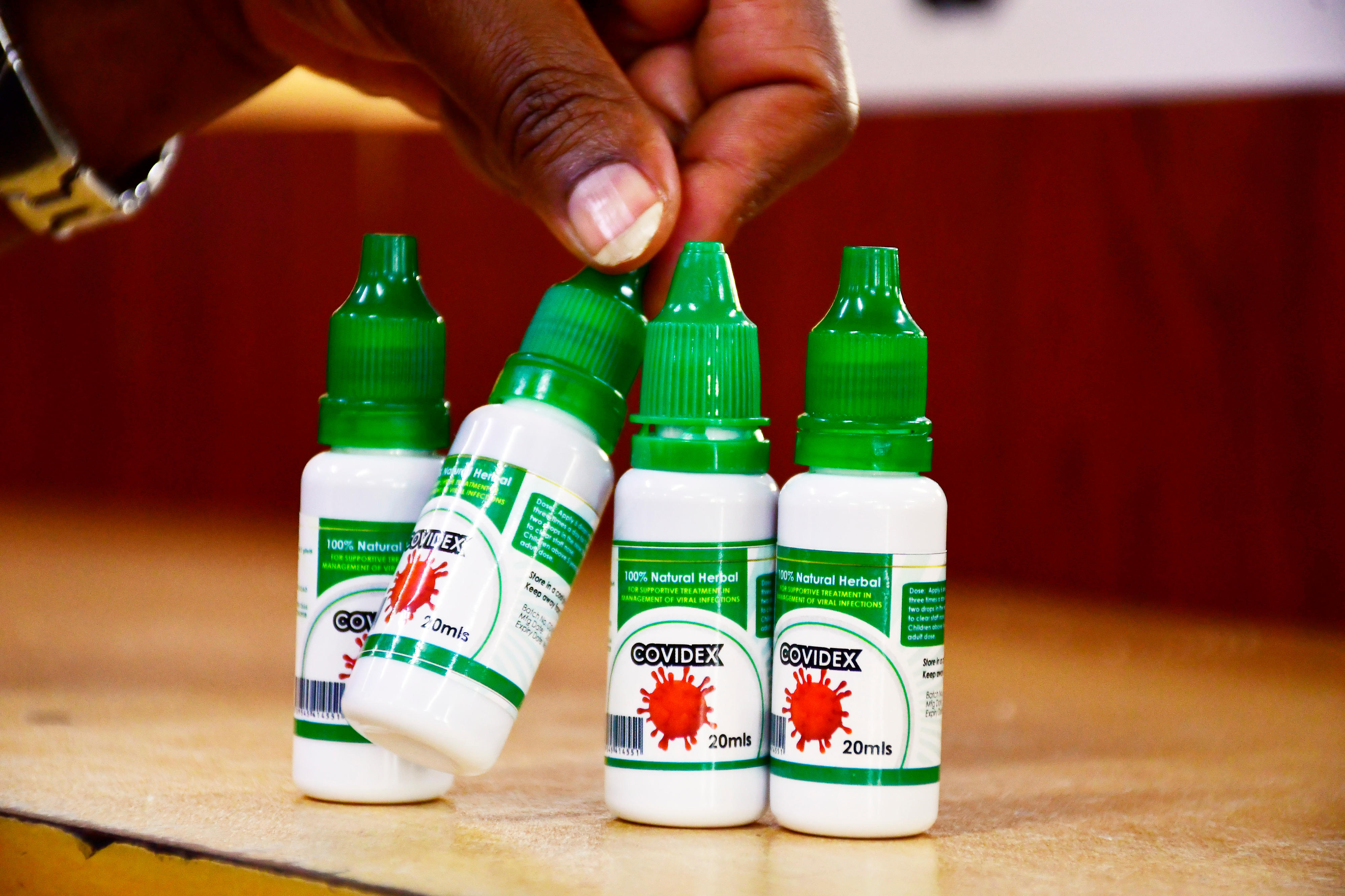 Samples of Covidex. The environment hasn’t been conducive to spur traditional medicine into a competitive industry. PHOTO/RACHEL MABALA

Professionalism
In his analysis, researcher John De Connick and policy adviser at the Cross-Cultural Foundation of Uganda, notes that traditional herbal medicine is used by a large percentage of the population and provides household income.

Now that the medicine has started being registered, demand for it has increased. But traditional healers lack the capacity to produce in bulk, while maintaining quality.
This is because large scale commercial production of validated herbal medicine requires professional management and presentation skills, which individual practitioners currently lack, although they may have access to sufficient supplies to meet the demand.

He continued: “In some cases, deteriorating quality has been noted, pointing to the need to establish linkages with local industries to invest in large-scale, quality production.”
Just like Prof Ogwang, the industry analyst, observes that lack of entrepreneurship skills, including marketing, packaging and record keeping, has diminished the dividends for traditional healers and may lead to a reluctance to share information with whoever can commercialise their products.

Policy concerns
An appropriate policy environment would invite interested investors into joint ventures, with better prospects for profitability.
According to industry players, research fundings remain insufficient, posing challenges for herbal medicine, given the high costs involved.
According to researcher De Connick,  up to Shs40 million per specimen will be required, an amount of money that is out of reach for most herbalists.

Validation also requires time, and costly testing equipment, whose spare parts cannot be obtained locally.
Sending samples for testing to other countries is another expensive affair. As a result, neither is the Natural Chemotherapeutics Research Laboratory (NRCL) including herbalists association leadership, whom researcher De Connick, worked with for this publication, is in position to provide substantial financial support to herbalists because of their own financial constraints.

Further, the publication discloses that the sample analysis work carried out at NCRL can only guide other agencies, such as the National Bureau of Standards and the Uganda Export Promotion Board to give additional assistance to herbalists. Limited resources slow down validation, to the disappointment of some healers.
Prof.  Ogwang, observes that while useful knowledge exists among herbalists, the demand for validation far exceeds the capacity of the Laboratory, leaving many pending applications.  After testing, there is need to simplify reports so that healers can fully understand the results in terms of toxicity, safe dosage, appropriate administration and storage.

Morepartnerships required
Mr Don Patrick Bugingo, the general manager for Aloesha Organic Natural Health Products, says limited research, analysis and documentation has not helped the industry over the years. This, he notes, is largely responsible for the negative attitudes towards embracing traditional herbal medicine by a critical mass of the population.
“If we work in collaboration, we can dispel many of the rumours that are derailing the growth and development of the industry,” he said.

Prof Ogwang adds: “It is possible to establish and maintain relations between traditional medicine practitioners and modern medical institutions as it is the case in countries such as China and India where the medical doctors prescribe herbal medicine for patients.”

According to researcher  De Connick, “With many of us returning to nature for health and nutritional remedies, the economy can benefit from exports of Ugandan herbal medicine and gainful employment for smallholder farmers cultivating medicinal plants on a commercial basis.
He adds, “This would help both public and private sectors to see traditional medicine as a resource that can be harnessed, and turned into commercial gain. Further, collective efforts to promote traditional medicine will not only generate economic and health benefits, but also restore a sense of pride in our cultural heritage.”

Commercialise herbal medicine
He thus recommends, “The commercialisation of herbal medicine should be promoted, and its economic benefits to individual herbalists and the general public highlighted as a means to poverty reduction at household and national levels. Clear memoranda of understanding should be developed to put the traditional healers’ expectations into perspective and allow them to negotiate from the onset the benefit they expect from partnership with other parties, including government.
“They also need to be equipped with skills to manage the commercial production and sale of validated medicine, or to link them with public and private organisations that can enhance their services and products for commercial use,” researcher De Connick wrote.

Todate, the Directorate of industrial training has developed a detailed training protocol by which those involved in herbal medicine can translate their knowledge into commercially usable forms. This will go along way in bringing many herbalists to the level of certification and possible commercialisation of herbal remedies.

Herbal medicine
With an estimated traditional health practitioner for every 200 to 400 Ugandans (compared to 1 western- trained doctor per 20,000), herbal medicine has long been used to manage a range of common conditions, including malaria, digestive and respiratory problems, toothaches, skin diseases, and childbirth complications.
On Tuesday February 5, the Parliament of Uganda passed the long-awaited Traditional and Complementary Medicines Bill, 2019.

The Uganda National Health Policy 2000 recognises the role of traditional medicine in the healthcare delivery system as a step towards improving health service delivery in Uganda.
This Act defines traditional and complementary medicine in relation to modern medicine, to establish a Council to control and regulate the practice of traditional and complementary medicine, to register and licence practitioners.
The global herbal medicine market size was estimated to be $83 billion in 2019 and is expected to reach $550 billion by 2030.