In another cage on the eastern side, lies tortoises. Sarah Nakalema, one of the 13 employees at the facility, takes me through her daily routine at the zoo. Feeding tortoises is among her daily tasks. She is careful not to let tortoises’ urine spill on her. It is said to be poisonous. In stock, are different species of tortoises.

My fascination with Chakig arose out of curiosity after watching a television programme on UBC TV hosted by Becker Ssempeebwa, about the wonders of Chakig. The show featured spectacular views of the jungle and wildlife.
Margaret Nakaye, the Buganda Miss Tourism 2017, had also visited Chakig and posted her experience on her Facebook wall. Every sentence of her story that I read, drew me closer to this tourism centre.

Since I did not need to travel a long distance and part with millions of shillings to access the facility, I decided that this is a place I needed to visit soon.
On a Monday morning, two week ago, I trekked to Chakig Eco-Tourism Centre, a jungle 15 minutes away from Mukono Town.  Located in Nakoosi village, Nakisunga Sub-county Mukono District, a 5km trip from Jinja Road off Kigombya town, Chakig Eco Tourism Centre is a conservation area sitting on 20 acres.

My plan was to discover the mysterious place with a mini zoo and nature walks famously referred to as “nature bathing.” Scientists believe that the time spent under the trees canopy is therapeutic.
Taking a boda-boda ride along the dusty road, I checked in at around 9am after making an appointment with Paul Koorinako, a director, who had been expecting me since Friday. After exchanging pleasantries and having breakfast, I was taken on a tour around Chakig.

The zoo
I was eager to take a stride into the jungle. My first stopover was at the rock garden, which overlooks a camping area kept in pristine conditions. At the rock garden, you can have bonding sessions and friendly conversations.
A few steps away, lies a mini zoo. Established in 2019, the zoo has two ostriches (a rooster and a hen), parrots and tortoises. As a caretaker, Sarah Nakalema keeps the animals in the zoo in tip top shape.

The ostriches, which she named papa and mama, come forth at the mention of their names. The rooster, which she told me is identified by distinct dark feathers, is a bully that runs far away into the cage only to return to the female when Nakalema starts feeding them on sukuma wiki. Nakalema told me a lot about ostriches but I chose to remember how roosters are responsible parents. During the day, she says, the eggs, which are the largest among other birds in the world, are for six weeks, taken care of by the female.
“Ostriches cooperate in hatching chicks. The female’s brownish appearance makes it a better protector during the day while the male takes its turn in the night because of its black feathers,” she says.

Feeding tortoises
In another cage on the eastern side, lies tortoises. Passionate about her job, Nakalema, one of the 13 employees at the facility, takes me through her daily routine at the zoo.
Feeding tortoises is among her core activities. In stock, are three types of tortoises including; leopard tortoise, the omnivorous bell’s hinge-back tortoise and marshy-terrain tortoise. What she fears most about tortoises is their urine which she says is poisonous.
“Some tortoises do not like eating. So, I starve them to reinvigorate their appetite. I also have to take precaution while handling them to avoid their urine from spilling on me,” she says.

In the jungle
As I strolled downhill into the forest, I was welcomed by guava trees in an abandoned coffee plantation and feeding monkeys that kept a safe distance from me. 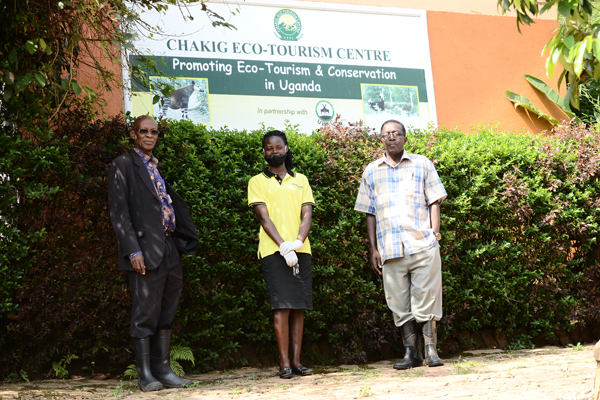 Sarah Nakalema (centre) with proprietors of the Eco-tourism centre, Paul Koorinako (L) and Bernard Rugambwa (R). Their dream is to leave behind a model tourism centre in the region. PHOTO/GEORGE KATONGOLE.

Nakalema tells me this conservation area has many types with the most common being the black-and-white colobuses, locally known as engeye and the red-tailed monkeys.

She warns me that some monkeys are very aggressive, especially to women as we advance into the forest. Using a trail into the jungle, I am told the conservation area covers more than 20 acres. It is a habitat for a wide range of animals, some of which have fled from destroyed forests within the neighbourhood.

Koorinako explains that the wide walkways are not only aesthetic but a safety precaution. You can easily spot snakes as you walk, he says.
Although I had opted to take the nature walk at noon, I was advised that it is the same time snakes come out to bask. Our nature walk in the jungle, which was supposed to take 90 minutes, lasted only 20 minutes.
Nature walks in tree canopies and thick creepers requires gumboots, a walking stick and a guide, for safety reasons. Snakes of different types and ages reside in this forest. My guide told me stories of a snake well, which also serves as a community water point.

Snake well
Koorinako and Nakalema steered us through the quiet and calm forest, before telling us about the snake well. “Guides say they normally see a big black snake which we are told is very old. Actually some tell us it has beards. It must be an exaggeration, but the snake comes out every afternoon,” Koorinako says.

“When villagers see it, they don’t run. They only ask it to let them fetch water,” he stresses. I am told no accidents have been reported at the well.
The snake well area consists of an unidentified evergreen tree, which I gather is more than 100 years old with a well beneath it.  When we arrive, Nakalema and Koorinako touch the crisscrossing roots through the well, as I stand at a safe distance to take photos, in case the snake slithered out. Nothing came out but anxiety landed me in a mud-filled water hole.

Although I was panting and sweating as I got out of the forest, the adventure led me to the botanical garden, where more than 100 local herbs are conserved.
From common herbs such as black jack to medicinal plants such as prunus Africana, a tree commonly used to treat malaria, Citropsis articulata believed to cure impotence, Nakalema briefs me on the available herbs, which she says are facing extinction.

What makes the facility tick
I was tempted into chewing leaves of a plant I understand scientists have tried to make studies for possible cure of coronavirus.
The tour comes to an end with a sneak peek into the luxurious accommodation facilities. Homestay facilities in the community are also an option for visitors.

The nature walk costs Shs5,000 for Ugandans, while students part with Shs3,000. A guided training and demonstration in the botanical garden is Shs10,000. For people who want a getaway, a family cottage or executive room is available at Shs150,000.
Low-cost rooms go for Shs90, 000. All bed and breakfast. Extras include a kitchen, natural rock garden and a chapel for Christians wishing to hold silent prayers.

Why eco-tourism in an urban area?
This was the reason I embarked on a tour to Chakig. The pressure is mounting on state-owned conservation areas. The increasing demand for land for agriculture, settlement and industrialisation, has created running battles between authorities and culprits.
The attention has now turned on privately owned facilities for eco-tourism. Chakig is a jungle, where people keen on tourism can relax without travelling hundreds of kilometres.

In 2000, Koorinako, a retired auditor, teamed up with his wife Sally as well as Rugambwa, a retired educationist, acquired 40 acres of land in Mukono and decided to venture into agriculture.
In 2017, Chakig Eco-tourism Centre partners, Bernard Rugambwa and Paul Koorinako, decided to invest in  eco-tourism after failing to make business sense out of agriculture.

Business idea
“Whenever we hosted annual meetings in Uganda, we would take trips to Jinja, Mbale and western Uganda. With about 50 people, we would spend a lot of money. That is when we got an idea to start an eco-tourism centre,” Koorinako talks about their beginning.
The Eco-tourism Centre started by hosting a three-day wildlife and zoo exhibition in conjunction with the Uganda Wildlife Conservation Education Centre (UWEC), commonly known as the Entebbe Zoo. This offered a fertile ground for domestic tourism among school-going children, communities and different organisations.

Later they started hosting Christmas parties for children with lots of children’s games and circuses. As children enjoy the games, parents go for nature walks, volleyball and skipping. Children who did not know what a jungle was always insisted on going with their parents.
The centre also hosts camp fires, where participants enjoy nature walks, birding, camping, goat roasting and other social activities.

Sarah Nakalema, the caretaker, feeds ostriches at the Eco-tourism centre. She is flanked by Paul Koorinako. PHOTOS/ GEORGE KATONGOLE

Chakig Eco-Tourism Centre was registered in 2017. In 2019, they opened a zoo facility with ostriches, parrots and turtles/tortoises. The centre has finalised plans to bring in more wildlife and social activities.

Exhibitions
Before the Covid-19 outbreak, the facility hosted tourism expos that attracted school-going children and people within the community.
Chakig Eco-tourism Centre comes complete with secluded cottages, camping facilities, a botanical garden and a natural forest with beautiful creepers.

As a precaution, you have to be on the watch out for snakes in the trees or the dry leaves as a tourism police officer takes care of you during the nature walk. But be silent to enjoy the music from the trees and birds.
Although tourism is one of the sectors that was badly hit by the coronavirus pandemic and lockdown, Koorinako says the slump raised awareness about the potential of domestic tourism.
The centre is a benchmark upon which tourism will evolve in urban areas. A nearby forest has been turned into a rice garden, forcing the centre to host a number of fleeing animals.

“Sometime back we had antelopes and red-tailed monkeys. They never used to be in our facility originally but since their habitats are being cleared, they find refuge at our centre,” Koorinako adds.
There is a constant threat from encroachers, especially those that stealthily cut trees in the pretext of collecting firewood.

Future
The proprietors wants to leave a legacy. “We shall leave this facility here. But our dream is to leave behind a model tourism centre in the region,” he says.
They plan to fence off the 20 acres in order to control animal movement into neighbouring homesteads and make the facility a safe haven for the animals and the community.
In their five-year wildlife management plan awaiting approval from UWA and the National Environment Management  Authority (Nema) for environmental impact assessment, they plan to acquire more animals.