Advertisement
By Edna Ninsiima
More by this Author

Among the lush green hills of the Tooro sub-region, women’s groups are the crux of a little known facet of the tourism export industry in Uganda - the home decor business.

Members of one such group, which often comprise between 30 and 400 members, are at the Rwenzori Sustainable Trade Centre  (RSTC).

From a distance, women gather in the compound. One woman holds a book and pen, consulting others. They appear to be counting for a while, eyes shifting from the book to a heap of small, multi-coloured baskets lying on the grass. Eventually, they pack up the baskets on the lawn into white sacks and prepare to leave. On their way out, I introduce myself and request to have a word with them.

Ngombe Women’s Group is an association of women basket weavers who collectively make at least 500 baskets a month. They partner with Rwenzori Baskets, a department of the centre, which works with trade communities in the Rwenzori region to establish an export market for products.

When I met them, they had brought their finished products for export preparation. I ask about the baskets in the sack. “Ebyiibo ebitaribirungi (these baskets that are not good), one of them responds. Rejected baskets are, on inspection by the quality controller - who I later identify as the woman holding a book and pen - found lacking in the export product standards.

From where I am standing, it is a good thing we have quality controllers, as I later tell Margaret Kasande, the crafts coordinator at Rwenzori Baskets. A rookie, outside observer like myself would have found no fault with those beautiful crafts.

Standards
So where do the rejects go? Kasande says they are returned to the weavers, who either sell them locally at a cheaper price, offer them as gifts to friends or put them to use in their homes. I reiterate that I would buy any of those rejects in a heartbeat.

“They are not that bad. But they do not meet certain specifications of the buyer such as size, dimension or colour. We are actually talking to the city council to interest them in setting up a crafts market here in Fort Portal. Like the one on Buganda Road in Kampala”, she adds.

So what exactly is entailed in the centre liaison between the trader and consumer? First, the centre coordinator acts as interpreter during negotiations between foreign buyers and weavers.

The centre also provides weavers with raw materials and needles for groups, which might not have capital to invest in every order. Once they are paid post-production, the money for raw materials, as earlier calculated, is deducted and paid back to the centre.

“We are also working on a Fair Trade Certification’’, Kasande reveals. Fair Trade is a system which ensures the producers are protected from the risk of underpriced products. 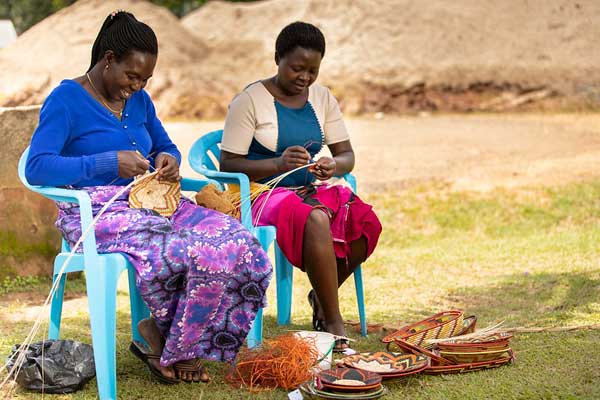 The process
Women use papyrus, banana fibre and raffia - a soft fibre that comes off the leaves of coastal palm trees as raw materials. The former are soaked first, hang to dry, before they are sorted for weaving, which is done by hand, with the help of a special needle.
The raffia is woven over the papyrus or banana fibre to give baskets a softer finishing, and their respective colours.

At the 200-member Rubona Basket Weavers Association, Kellen Kengazi, the crafts manager, walks me to the back of the office, into a two-roomed outside kitchen with concrete stoves. Here, two other women are boiling raffia in a large saucepan.

In another, they boil roots of turmeric, a yellow-orange plant in the ginger family. Once it is ready, they add the turmeric water to the pot pan of boiling raffia, which will turn from its pale cream colour to a rich yellow.

To achieve a brown raffia dye, it is the same process, except they also add old roots of the lime citrus fruit. All the basket colours are achieved this way - boiling different plant roots and tree barks to achieve a select natural dye.

Large insatiable market
In the international home decor business, baskets are the curtains of city home living. The demand is sky high all year round, so much so that Rwenzori baskets has a target to export 100,000 baskets this year alone.

“A shipping container can take up to 5,000 baskets; and we usually fill them”, Kasande says. Between July and August this year, Rwenzori exported up to 20,000 baskets - and this with some Covid-19 triggered inconsistencies in orders.

The demand is also not just for the wide-brim woven containers that come to mind when we hear ‘basket’. On display at both Rubona Baskets and Tooro Gallery, which opened another store on Mawanda Road in Kampala, you will see other basketry items such as pencil holders, table/place mats, flower vases, bread baskets and serving trays.

Market
Export markets are mainly the UK and US sometimes, while local markets include national park lodges, gift shops and crafts markets in Kampala, as well as individuals. Skimming through the products on display, I see prices ranging between Shs17,000 to  Shs500,000.

The sales model on the other hand varies from one group to another. For example, while Rwenzori baskets brings weavers and buyers together for direct negotiations, Rubona whose market is largely local, buys products from weavers and sets a resell price.

When a product is sold to the final consumer, a percentage is taken off and put aside. At the end of every year, this percentage is given to the particular weaver as a bonus. 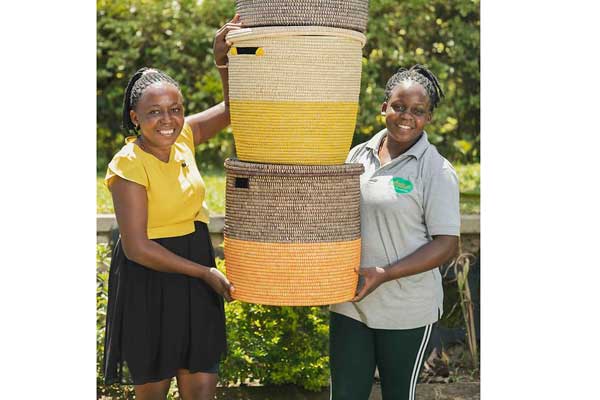 Women display some of their works. PHOTO / CHRIS LUTANGA

A legacy of women
After university in 2008, Anne Kabahuma Kalinzi, the proprietor of Tooro Gallery, went on holiday to her mother’s home in Fort Portal. While there, she ran into some of the young women with whom she had gone to secondary school. “They had given birth but had no means of income to support themselves and their children.”

In a patriarchal society, where women’s lives are often reduced to performing their gender roles and living by the instruction of men, Kabahuma thought that financial freedom for her former classmates would be a remedy.

The start
An opportunity soon presented itself. At a non-profit organisation, where her mother worked, other employees expressed interest in buying baskets.
A local bookshop was also willing to sell the products. With a ready market, the nine women embarked on a weaving project. In 2014, she attended the Youth African Leaders Initiative (YALI), where she won an award for presenting this same women’s sustainability idea.

“I thought this idea could be even bigger than I imagined.” She made a decision to leave the job she had started and threw her full weight behind this basket making group. Together, the women started to move across the region to different markets selling baskets.

“At one of the markets, I met a humanitarian photographer, Helen Manson who took and shared our pictures.” Shortly after, the market expanded, buyers on the international market had specific needs, and these women needed to invest in better skills and designs to improve the quality of products.

Expansion
This is how Tooro Gallery was born. The community-based organisation empowers women with skills and material for handicraft making, and also brings their finished products closer to valuable markets.

“We are opening more outlets to reach customers. We are now on Mawanda Road, another one is already in Jinja, and we plan to expand to Entebbe,” she adds
Kabahuma says they have reached a point where they want customers to buy their products based primarily on quality, and not merely as a purchase to support some cause.

“We are no longer hiding behind the story of why we started.”
Baskets hold cultural significance in this region. The craft making skill is a legacy that has been passed down several generations of women as Kengazi of Rubona Baskets tells me.

“This work has been done since the times of our great-great grandparents, and when girls learn from watching their mothers, they also teach their daughters in future.”
The small coffee baskets, a common product, are used to serve in-laws coffee beans at traditional marriage ceremonies.

Poor social attitudes
When Kabahuma quit her job to focus on Tooro Gallery, acquaintances did not have kind words for her. Some said it was a shame she was wasting all the money her parents had invested in her education to “venture into making baskets.” Others to this day reserve nicknames such as the basket lady for her.

This work is often considered the job of the poor and unlearned, hence frowned upon. Kengazi says that many customers dismiss the prices of crafts, claiming that making baskets is easy, and women are just picking banana fibre from their gardens and weaving a product in a few hours.

“They think that their work is very simple. They don’t consider that it takes time and skill. Yet these women who weave at home, also have a lot of other domestic work.”

Delays is distribution
The coronavirus pandemic has also presented challenges. Closed shops in lockdown led to orders plummeting and distribution took longer than usual, with products delaying in transit. But according to Kasande, things are already looking back up.

Rwenzori Baskets, Rubona Basket Weavers Association, and Tooro Gallery are the leading basket businesses in the region and country.
All the three are run and sustained by women who through this creative, cultural skill have created better lives for themselves, while also educating their children and feeding their families.

Progress
The women with whom Kabahuma began have moved from grass-thatched to brick houses. Some have taken up local council leadership positions.
Others have made enough capital to invest in other income-generating businesses. Among the weaving groups, men have started supporting their wives in the craft by collecting papyrus from the wetlands.

Into this bargain of pursuing better standards of living, these women are revolutionising the traditional basket by exploring unique designs and upgrading their skills to boost grow tourism and meet the needs of international home decor business.