Advertisement
By Desire Mbabaali
More by this Author

As schools remain closed to the rest of the classes, some parents have resorted to enrolling their children in technical apprenticeships as a measure to keep them engaged and away from home.

At a furniture workshop in Mpererwe a Kampala suburb, I find about 10 young boys in the ages of 12 - 15 involved in carpentry work. Some are sanding furniture, others painting and some are observing the workmen go about their various tasks.

This has become a common sight in local workshops as parents and caregivers seek options for engaging their children as they await schools to reopen.

“Many parents are looking for alternative activities to keep their children occupied to keep them away from getting sidetracked into harmful groups and habits.  So they have brought them here because there is an enabling environment in which education and training are delivered. The environment has factors that combine to make the education and training process able to generate the desired technical capabilities and essential skills,” the workshop owner explains.

Cultural shift?
This development will not do away with the cultural bias against vocational training that is rampant in the community. There is known preference for mainstream academic education and it is repeatedly being claimed that the demand for vocational education is low which limits the availability of such institutions.

The workshop owner observes that while currently the demand for technical training is picking up, the pandemic and the consequent financial constraints make it difficult for parents to be able to fund.  Most of these apprentices are primary school leavers and dropouts, a majority of whom are from poor families and cannot afford the financial cost required to attend the officially recognised technical colleges.

The workshop now has ten boys and each of their parents is charged differently because of their varying financial capacities. Five other carpentry workshops in the location also have apprentices under similar arrangements.

Beauty salons are doing for the girls what carpentry workshops are doing for the boys.  Mumbejja Beauty Salon, a local beauty parlour has 16 new apprentices between ages 11-17 that study in shifts; morning and afternoon. Precious Wanyana, a mother of four and resident of Seguku, Entebbe road revealed how more parents were running to this option.

“I was first introduced to the idea by a group of friends who had enrolled their children into learning skills such as make-up and hairdressing. One particular friend had taken her daughter to learn how to make bags, and tailoring. Since I did not have the money to keep paying the teacher to homeschool (she paid Shs 90,000 per week to the teacher) for my teenage daughter who is in Senior One and her siblings, I thought that having her apprenticed in some skill would benefit her today and in the future,” she admits.

Since her daughter was interested in fashion, she got a placement for her at a bridal house in Kampala to learn beading skills.

“We go with her in the morning while going to work, since we have a private car and then pick her up in the evening. After three months of learning, it is incredible how much she has learned. She even brings work home to bead wedding gowns and earns a little money,” she says.

The trend is not limited to Kampala only. Yusuf Waiswa, 15 is a Primary Five pupil at Kalagala Primary school in Mayuge District. One year ago when schools were closed as a precautionary measure to curb the spread of coronavirus, Waiswa had no other option but to sit home with his parents and wait for schools to open.

As an alternative, Waiswa was enrolled as an apprentice at a motorbikes and bicycles garage. His major work is running errands as he learns the skills. For his effort, he is paid Shs7000 daily.  Waiswa confessed to having no interest in going back to school even when schools finally open. 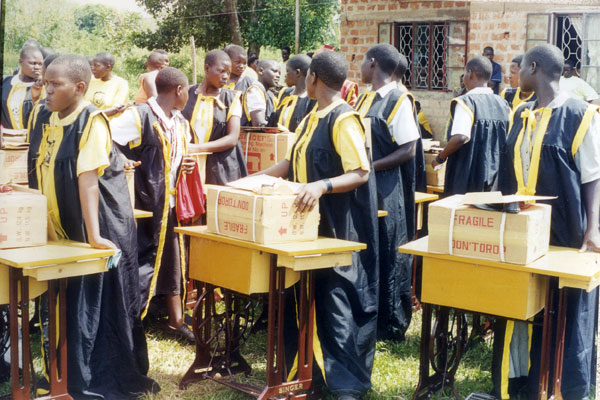 Esther Chebijira, a teacher at Kalagala Primary School is not surprised by her former pupil’s decision because things have been difficult in her community since schools closed.

“The indefinite closure of schools made learners lose hope. Unlike their counterparts in the city, learning for the village children stopped in March 2020. As the government kept prolonging the reopening, children lost hope in school ever opening and many girls got pregnant. They felt that they had lost so much that they would not easily catch up in case schools resumed. They therefore had to find something that works for them,” she says.

From her observation and conversations with parents, Chebijira shares that almost half of the children in her community are involved in apprenticeship or income generating activities.

Scope of adaption
In Kalagala Village in Mayuge District, five out of 10 of children are into apprenticeship with boys mostly involved in income generating activities such as working on chapati stalls in trading centres, garages, carpentry shops and other casual labour. Girls are largely involved in tailoring and hairdressing.

In Isenda Parish in Mayuge District, Emmanuel Kimuli, a teacher at Isenda Primary School, also notes that four out of 10 of children in the community are being apprenticed. He adds that although a large number of parents in the community believe that formal education is important for their children to attain good jobs and develop their community, they would also like their children to get vocational skills and this need has never been as much felt as it has been during this pandemic.

“Parents say that the children need skills at such a time because they (skills) enable them to earn an income the moment they learn them and this way, their income is increased so that they are able to acquire the basic necessities such as clothing and food,” Kimuli says.
In Kabale, Emmanuel Arineitwe, a journalist at Voice of Kigezi, shares that a number of parents are running to the same alternative as schools remain closed.

“I have already seen two parents in my circle who have been taking their children to those workshops for apprenticeship,” he confirmed when asked whether he has observed the trend in his area.
At Elegu border point, Ronald Manjo a resident and businessman, says that since the small town is largely full of commercial activities, children that are not in school are involved in small businesses and vending.

Wanyana notes that while she is actually paying for an education and her daughter might acquire the skill, it will not be officially recognised since the salon is not an officially recognised institute of learning. She appeals to regulatory institutions such as the Directorate of Industrial Training and Uganda Business and Technical Examinations Board to find a way of certifying this kind of non-formal skills training. Since there is clearly a need for this form of training, the least regulatory bodies can do is validate and accredit the competencies obtained through this effort.

The formalisation and certification of skills acquired from private establishments is urgent and crucial to give value to this training sector. Similarly there should be quality assurance and standardisation of this education. Because most of the beneficiaries come from underprivileged backgrounds there is a need for mobilising public and donor support as a way of subsiding or funding the training.

Although the Uganda Association of Private Vocational Institutions (UGAPRIVI) was formed to improve the quality and the image of private vocational institutions in Uganda, and to strengthen Business, Technical, Vocational Education and Training BTVET sector as a whole, more urgent strategies are needed to accommodate the current need.  According to UGAPRIVI there are not enough appropriate opportunities for Ugandan youth to learn vocational skills in public BTVET Institutions alone.

Against the background of continually increasing numbers of school leavers and the low capacity of Government owned BTVET Institutions, the private BTVET institutions deserve increased attention. The promotion of BTVET and its values is one of the major components of UGAPRIVI’s tasks.

He said the strategy, however, could not be implemented because there was no policy to support the reforms in TVET. He said with the TVET policy in place, reforms are inevitable and they are ready for implementation.

Mr Kakooza said the requirements for recruiting students to TVET institutions is also going to change. He said whereas the current process only calls for recruitment of student with O-level certificates into TVET, recruitment will now be based on both certificates and experience that  a person has acquired at work.