The funeral-goers began gathering at the shrine, a gigantic physical symbol of many of Lwanga’s feats, from as early as 8am amid heavy police deployment and tight security.

Security personnel frisked every individual before allowing them to access the venue where a requiem Mass for the archbishop, pronounced dead on Saturday morning, was held.

Archbishop Lwanga, 68, is due to be buried today at a crypt inside Rubaga Cathedral, which was his administrative and spiritual seat as a prelate.

In conformity with standard operating procedures to prevent the spread of Covid-19, all mourners at Namugongo were required to wear facemasks and take other precautions.

At about 9.40am, a Uganda Funeral Services hearse pulled up at the shrine, whose renovation for a 2015 papal visit was overseen by the late Lwanga.

Pall bearers clad in black suits and wearing white gloves then rolled a bier with Lwanga’s remains across a short bridge onto a pulpit, followed by a procession of senior clergy.

Body arrives
The sight of the coffin carrying the remains of Archbishop Lwanga, hailed posthumously as a pragmatic cleric, who combined preaching the word with working to improve welfare of the faithful, was greeted with mourners surging forward to have a glimpse of his remains.

Many stood up and craned their necks to catch a last glimpse while others stretched out their arms to capture a photograph and video of the casket on their mobile phone handsets.

Tears welled in the eyes, or rolled uncontrollably down the cheeks of dozens of mourners as funeral tunes by a choir blared over the speakers.

Over the past 16 years, the faithful had grown accustomed to hearing a sermon or announcement from Archbishop Lwanga in his guttural voice at major events at Namugongo Martyrs Catholic Shrine. 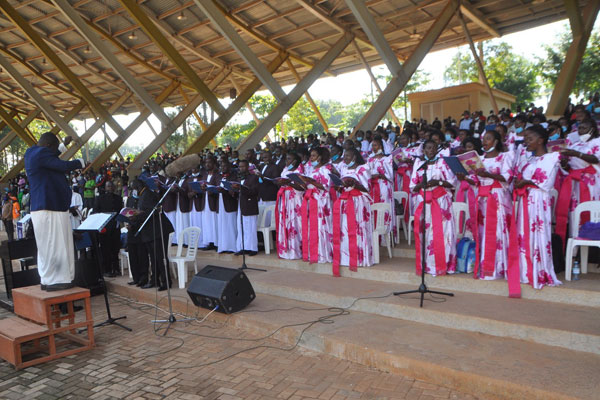 But yesterday, he lay motionless in a glittering hardwood casket.
The main celebrant at the 10:30am requiem Mass, the Masaka Catholic Bishop Serverus Jjumba, said the primate’s demise happened unexpectedly and impacted many Ugandans.

“His death was sudden and untimely by all human standards. Lwanga’s death has created discordance, doubt, and depression in many of us,”  Bishop Jjumba said.

He added: “We are bearing questions in our hearts and minds because of the death of our religious leader and shepherd. It (his death) is the talk of the street, people murmuring to one another in grief, asking themselves ‘[why] yet another cleric has fallen’.”

Bishop Jjumba urged Ugandans to remain strong and faithful amid such difficult times.

“He (Lwanga) has been a voice of the voiceless and a courageous one at that,” he said to deafening applause.
The sermon was conducted in both English and Luganda in balmy weather and clear blue skies, contrasting the drenched prayers at Lwanga’s ancestral home in Kyabkadde, Mukono District, on Tuesday.

The Kampala Archdiocese Head of Laity, Mr Ivan Kalanzi, who fought to control tears, said cryptically that death had snatched Lwanga like a thief in the night.

“Death came and took him like a thief in the night. Just imagine the day [before] his death, he was participating in the Way of the Cross and before we knew it, we heard the news that he had died,” Mr Kalanzi said.

“Why does God take away the good people and then leave the bad ones behind?” he said without referring to any particular person. The congregation roared in praise when Mr Kalanzi added that God also loves good things.

Msgr Charles Kasibante, the vicar general of Kampala Archdiocese, said they held a requiem Mass for Archbishop Lwanga at Uganda Martyrs Shrine because it was spacious and it would allow many Ugandans pay their last respects to the late Archbishop.

“Rubaga Cathedral [where Lwanga is to be laid to rest today] is small and for this reason, we opted to also bring the service here so that any of you can bid farewell to the late archbishop,” Msgr Kasibante said.

Archbishop Lwanga will be laid to rest in a crypt inside Rubaga Cathedral section called Uganda Martyrs Corner.

He will be buried between the graves of Dr Joseph Kiwanuka (who served as the Archbishop of Rubuga from 1961 until the time of his death in 1966) and Bishop Edward Michaud, who served as the Apostolic Vicar in Tabora, Tanzania before being transferred to Uganda in 1932.

In a letter to the Inspector General of Police, the taxpayers state that demonstration will take place on April 29 in Kampala

The availability of sufficient supplies of affordable energy is a prerequisite for socio-economic development. However, the construction of power...