Advertisement
By Juliet Kigongo
More by this Author

The musician, turned politician popularly known as Bobi Wine, has been confined to his home since January 14, 2021 after he returned from voting, with security claiming that they had evidence that he was planning to incite violence and lead demonstration after he disputed election results in which the electoral commission declared Mr Yoweri Museveni winner of the presidential poll.

Shortly after Mr Kyagulanyi disputed the results, police and the army besieged his home and blocked anyone from leaving or accessing the premises.

Two soldiers stand in the bush next to the gate of the house of Presidential candidate Robert Kyagulanyi, also known as Bobi Wine, in Magere, Uganda, on January 15, 2021, a day the country's presidential elections.

The U.S ambassador to Uganda, Natalie Brown was also blocked by security when she attempted to access Mr Kyagulanyi’s home.

Government spokesperson, Mr Ofwono Opondo accused the ambassador of breaching diplomatic norms and engaging in "mischief" over her attempt to visit the opposition leader.

This forced Mr Kyagulanyi’s lawyers to file an application (habeas corpus) seeking to restore his freedom.

In his ruling on Monday, Justice Micheal Elubu ordered security operatives to “immediately vacate” Mr Kyagulanyi’s home or take him to an authorized detention centre if he (Kyagulanyi) has a case.

“Having found, as I do, that the restrictions imposed on the applicant (Kyagulnayi) are unlawful, it is hereby ordered that they are lifted. Consequently, an order for the restoration of the personal liberty of the applicant hereby issued,” Justice Elubu said in a ruling read on his behalf by the deputy registrar Jamson Karemani.

The judge advised that if the state has evidence that Mr Kyagulanyi is a danger to society and is planning to commit an offence as security has been claiming, then they should follow the law, arrest him, take him to an authorized detention centre and prosecute him in a competent court of law.

“Otherwise his continued detention at his home is illegal and an infringement on his personal liberties,” he said. 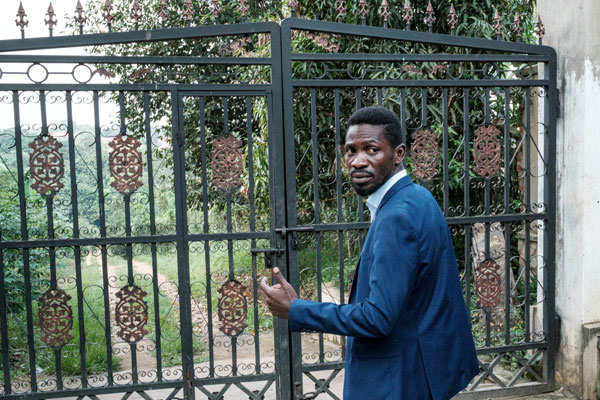 Presidential candidate Robert Kyagulanyi, also known as Bobi Wine, explains to media how uniformed personnel entered through a gate of his home in Magere, Uganda, on January 15, 2021. PHOTO/ AFP

The judge also ordered for “immediate restoration” of Barbra Itungo Kyagulanyi’s freedom and liberties after the Attorney General (AG) who was the respondent in the case on behalf of the State told court that her movements are not restricted.

The judge also granted Bobi Wine the costs of the application.