Advertisement
By YASIIN MUGERWA
More by this Author

As the battle for the Speaker of 11th Parliament boils behind the scenes, Daily Monitor digs into the performance of the frontrunners in the race for the third highest office in the country.
Statistical data analysis from legislative performance of 9th and 10th Parliament (May 2011 - May 2019) presents performance of Speaker Rebecca Alitwala Kadaga (Kamuli Woman MP) and her deputy Jacob L’Okori Oulanyah (Omoro County) on the number of Bills each passed or presided over.

9th Parliament
The 9th Parliament enacted 103 Bills, adopted 172 reports, 205 resolutions, debated 149  ministerial  statements,  concluded  30  petitions  and  had  34  questions  for  oral  answers responded to.
In addition, MPs made 45 statements/personal explanations, and 432 questions were asked during the Prime Minister’s time.
During the five-year-term, 17 oaths were administered to  members  arising  from  by-elections  and  appointment  of  ministers  from  outside  Parliament (ex-officio MPs).
However, the number of petitions, committee reports, questions and others received for consideration were not disclosed in the documents.

Some of the key bills Kadaga presided over include The Prohibition and Prevention of Torture Bill of 2010 and The Anti-Homosexuality Bill of 2010, among others.
In the same period, Oulanyah, oversaw the passing of The Anti-Pornography Bill, 2011; The Public Order Management Bill, 2011; The Narcotic Drugs and Psychotropic Substances (Control) Bill 2007 and The Anti- Corruption (Amendment) Bill, 2013. 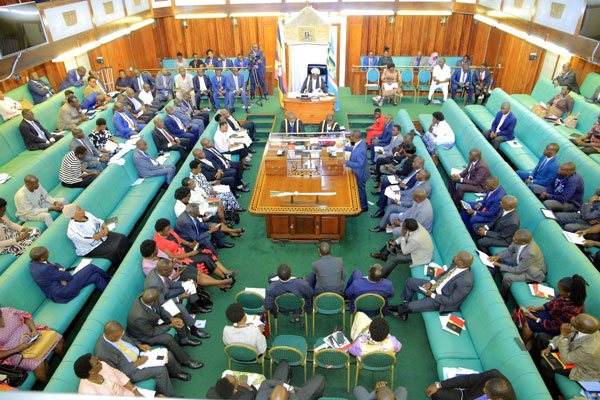 Members of Parliament during the plenary session at Parliament on February 2,2020. PHOTO/DAVID LUBOWA.

10th Parliament
Comparative analysis of the data for 10th Parliament is, however, incomplete and does not cover all the five sessions for two reasons:  The 5th and last session of Parliament ends in May this year, and the deputy Speaker has not chaired a single House sitting since May 2019.
However, data collected from House sittings show Kadaga and Oulanyah shared the first three sessions of 10th Parliament (May 16, 2016- May 31, 2019).

In the three sessions under review, 10th Parliament passed 54 Bills and of these, Oulanyah presided over 31(57.4 per cent) and Kadaga 22 (42.6 per cent).
In total, for all the eight shared sessions of 9th [5] and 10th [3] Parliament, Kadaga presided over the passing of 75 Bills and Oulanyah 82 Bills.  The 4th and 5th session) were not part of the analysis for the reasons explained above.

Methodology
Daily Monitor began collecting data on all the Bills presided over by both Kadaga and Oulanyah in 9th and 10th Parliament in November last year.
Raw data was also recorded for Bills which were either withdrawn or returned by the President for various reasons.
For months, Daily Monitor studied annual booklets and Hansards, containing the proceedings of Parliament and double-checked the records published at the end of every session of Parliament and often circulated to invited guests and members as part of the documents for the annual State of the Nation Address.

In the analysis for 9th Parliament, we used the dates of the passage of the Bills to ascertain which presiding officer presided over the passing of the Bills in question. We then tabulated accordingly.
The same procedure was done for 10th Parliament in order to do a comparative analysis of the two principals. We separately looked at the calendar of 2020 but that was all good since one presiding officer (Kadaga) handled the entire year.

Kadaga and Oulanyah also handled and concluded several resolutions, adopted committee reports, petitions from concerned citizens; considered ministerial statements; statements by members; questions for oral answers and Reports from parliamentary delegations abroad, among others. However, these weren’t considered in the analysis as they are deemed inconsequential to the core mandate of Parliament.
The focus was exclusively on Bills considered since amending, drafting and passing legislation is a central, institutional function of parliaments the world over. This function is rooted in the name “legislature”. The objective was to establish how much of actual legislative work each had done during the period under review; verify accusations that output was low yet sittings were frequent.

Pending Bill (see the lists)
The concern among members and public has been that the bills have not been accorded the kind of concentration they deserve. For instance, in her communication to the House on January 28, Kadaga highlighted 26 pending Bills even as the tenure of 10th Parliament comes to an end.
Under the rules of procedure, committees are usually given 45 days to scrutinise a bill and report back for second reading. Some Bills had however exceeded the 45 days provided by Rule 128. This explains the focus on the Bills as a core output.

In one of the sittings, the Speaker had on November 29 2018 notified MPs that “all pending Bills that had exceeded the 45 days provided by Rule 128 will be placed on the Order Paper for consideration by the House with or without the committee reports.”
Again, on December 5, 2018, Speaker directed the Committee on Rules, Privileges and Discipline to propose sanctions for committees that fail to scrutinise Bills and report back to the House within the prescribed time. It’s not clear whether this was done or not. The pending Bills are expected to be saved for the 11th Parliament to handle.

Kadaga-Oulanyah woes
Multiple sources in Parliament blame Oulanyah’s woes on the “poor working relationship” with his boss even as Kadaga blames the fallout on insubordination.
In an interview with Saturday Vision last week, Kadaga explains why she has not allowed Oulanyah to chair the House and reminds the man from Omoro that she is the boss.
Oulanyah told Daily Monitor  that he is not “doing interviews yet”.

Sources say the President, who chairs CEC, has since stopped the duo from making comments about the Speaker race in the media.
In 2016, Oulanyah tried to unseat Kadaga through the ballot but President Museveni and his CEC members quickly intervened and gave Kadaga a second term.
CEC would ask Oulanyah to contest for deputy Speaker and assured him that 2021 would be his turn to be Speaker.
Sources say this decision was reached after Kadaga made a case that it would be unfair to her to lead for one term yet her former boss Edward Ssekandi served two terms (2001-2011) before he was appointed vice president.

CEC members including President Museveni bought the argument and backed Kadaga’s second term in office. CEC has a strong say in determining who becomes the Speaker and Deputy.
Kadaga and Oulanyah are now members of CEC. They  both expressed interest in the Speaker job.  As the two principals gear up for what is expected to be a divisive contest in CEC and Parliament, their working relationship, however, remains frosty to the extent that the two no longer talks to each other.

Mr Oulanyah is determined to unseat Kadaga who was elected Deputy Speaker in 2001, a position she held until May 19 2011, when she was elected Speaker of 9th Parliament.
The President has on several occasions tried to reconcile the two but the quarrels have persisted.
Jacob Oboth-Oboth (West Budama South) who chairs the Legal and Parliamentary Affairs Committee, said: “The top party organ [CEC] where both of them sit is better placed to handle the issues and I nurse no doubt that all will be well sooner than later.” 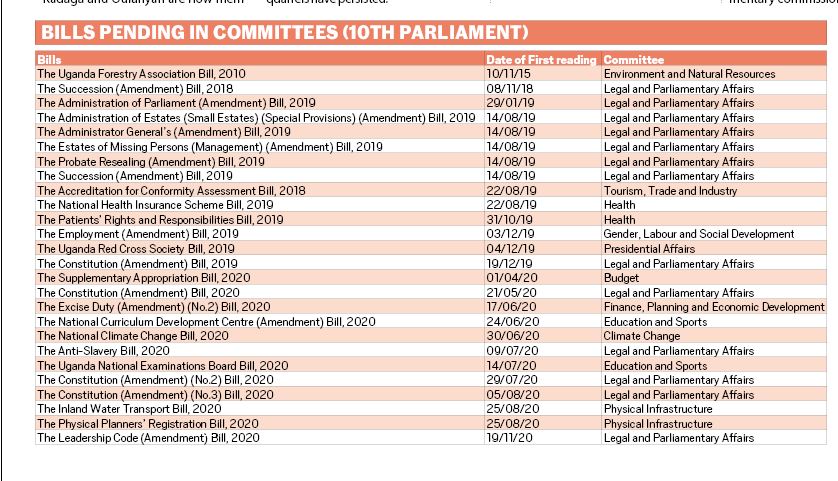 Drama in Parliament
The last time Oulanyah stepped in the chamber was on June 2, 2020. He stormed Parliament chaired by his boss Kadaga to have his name cleared on the floor
One of the lawmakers from Busoga sub-region (Mr Henry Maurice Kibalya, Bugabula South) had on May 7 2020 accused Oulanyah of betraying Parliament when he decided to return the Shs20m MPs had irregularly taken from Covid-19 response budget.

Oulanyah first wrote to Kadaga asking that the record be expunged from the Hansard because it violated the rules of procedure. He informed Kadaga that the matter touching the Speaker or Deputy Speaker can only be debated through a substantive motion. So when the Speaker delayed to act, he stormed the House.

Speaker Kadaga first ignored him and later agreed to expunge Kibalya’s submission. After he received justice, he immediately left the chamber.
Deputy Speaker Oulanyah only steps in when the Speaker is absent or busy with other engagements. The deputy Speaker only chairs the House at the discretion of the Speaker who chairs the Business Committee, which determines the business for a specific period.

MPs/ministers weigh in
Ministers as well as senior legislators, have weighed in on the bad blood between Kadaga and Ouanyah ahead of the election of a new Speaker and deputy.
Mr Abdu Katuntu, one of the senior lawmakers in the House, thinks the working relationship between Kadaga and Oulanyah has reached “a level of irretrievable breakdown” and proposes that the two personalities should not be forced to serve in the same office.
Ms Sarah Opendi, the State minister for Mineral Development, however, wonders whether individuals are supposed to be permanent in government institutions and she advises that one of them [Kadaga or Oulanyah] shouldn’t vie for the position of the Speaker.

The deputy Secretary General of the ruling party, Mr Richard Todwong, has asked the party’s Central Executive Committee to rein in and sort out the standoff before the polls.
“The two might not easily work together even if one becomes a Speaker or deputy…secondly, according to the rules of procedure of Parliament, a Speaker and deputy must be “dragged” to the seats. There is no need for campaigns. What we see is setting a dangerous precedent,” Mr Todwong said.

He added: “The decorum of Speaker’s office is very critical. Parliament is a House of decorum and dignity. We need to uphold such. I would even think that in future, once an MP is elected Speaker or deputy he or she must relinquish his or her parliamentary seat”
Mr Emmanuel Dombo, a former parliamentary commissioner and now one of the directors at the NRM Secretariat, has reminded Kadaga and Oulanyah that they are not infallible and for that matter, advised that the duo should be assisted to invite God in their midst.
“Once they acknowledge God’s presence, they quickly realise that they are human and fallible and therefore need each other to be stronger for the effective execution of their work,” Mr Dombo said. 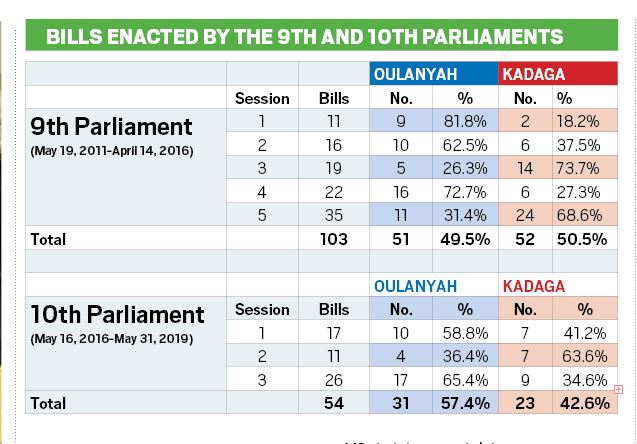 Lands minister Beti Kamya thinks the relationship between Kadaga and Oulanyah is “unfixable” and like her colleague, Ms Joy Kabatsi, the State minister for Transport, she proposes a promotion for Speaker and her deputy as a permanent solution to what other legislators called “endless wars in Parliament.”

“The solution is to promote the Speaker…make her vice president because she has really done everything in Parliament. Kadaga can’t like Oulanyah who always wants to take her job and yet he [Oulanyah] also wants to go up…give him a promotion too and the problem will be solved,” Ms Kabatsi said.
The new Parliament convenes in May when the current term expires. After the swearing- in ceremony, Chief Justice Alfonse Owiny-Dollo, will preside over the election of the Speaker and deputy.