T he government has described Chadian President Idriss Deby Itno, announced dead yesterday after being shot by rebels at a battlefront, as a “true Pan-Africanist” who championed integration and fought neo-colonialism.

Mr Okello-Oryem, the State Minister for International Relations, told this newspaper by telephone that the assassinated leader and President Museveni shared similar Afro-centric views and regularly held bilateral meetings on the sidelines of African Union heads-of-state summits.
The slain president’s son, Gen Mahamat Idriss, was yesterday named chairman of the Military Council, effectively putting him in the interim in-charge of the central African country.

“The circumstances under which he died are most unfortunate, but we appeal for calm in Chad and hope the transition will be peaceful as the next processes are managed,” Mr Okello-Oryem said.
Deby, 68, succumbed to injuries sustained in clashes with rebels in northern part of the country, the military announced.

The tragic incident, which brought to an abrupt end Deby’s rollercoaster three-decade rule, came shortly after he was declared provisional winner of Chad’s April 11 presidential elections.
The Chadian army said Mr Deby had travelled north of the capital, N’Djamena, at the weekend to morale boost troops fending off an onslaught by rapidly-advancing rebels opposed to his rule when he was attacked.
The exact circumstances of the encounter, and information about other possible fatalities, remain unknown.
He came to power in 1990 following an armed uprising, and had led the oil-rich country since then.

Deby had few peers in Africa for longevity in power, among Uganda’s Museveni, Cameroon’s Paul Biya, Republic of Congo’s Dennis Sassou Nguesso, Equatorial Guinea’s Teodore Obiang, and Rwanda’s Paul Kagame.
He was always a warmly welcomed guest in Kampala, the last being at Museveni’s May 12, 2016 swearing-in for a fifth term which in total was attended by 14 African heads of State.

In August that year, President Museveni reciprocated by travelling to Chad to witness President Deby taking oath of office for a fifth five-year term.
Thirteen other African leaders attended the glitzy inauguration took place at the Grand Hotel in the capital, N’Djamena.
It was held on the back of violent protests as the opposition contested Mr Deby’s re-election which they described as an attempt to die in power. And die in power, it happened yesterday.
Back in Kampala in 2016, President Museveni saluted Mr Deby and other African leaders for gracing his inauguration in Kampal, after an election criticised by the United States and European Union.

Mr Museveni, now in power for 35 years, said then that the presence of the executive guests was testament of a close bond of brotherhood existing between respective countries, including Chad. A former army commander, Gen Deby like President Museveni also got rid of term limits in 2005 and his government was regarded a darling of the West despite occasional break-down in relations with the West, ostensibly for his efforts to fight terrorism against the Islamist militias, the Boko-Haram. 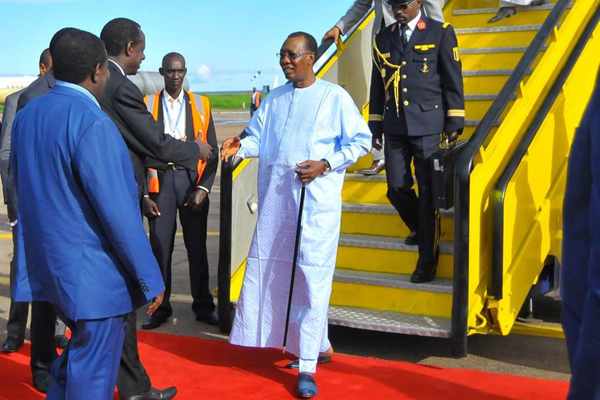 President Museveni, while on a two-day visit to N’Djamena also toured Chad’s refinery complex accompanied by select petroleum officials in the ministry of Energy, which bolstered Uganda government’s ambitions of constructing a local refinery in Hoima to refine some of the crude oil locally to cater for indigenous and regional demand.

Chad oil potential
In 2011, Chad finished construction and started refining oil at Djrmaya refinery after a Chinese company, the Chinese National Petroleum Company Incorporation (CNPCI) offered the country a helping hand.
The Chadian government bankrolled only 40 per cent of the total investment ($758m) for the refinery whose capacity is 20,000 barrels per day, enough to meet the country’s local consumption.

Oil revenues contribute about 70 per cent of the country’s budget and Deby, who ran a rentier state, alongside his acolytes largely controlled the windfall.
In 2016, Chad was ranked Africa’s seventh biggest oil producer at 180,000 barrels per-day but had fallen to the10th position by 2020.

At the African Union summits, photos showed President Deby freely mingled and chatted with counterparts.
He was among African leaders who, like Uganda, supported a proposal for African states to with withdraw from the International Criminal Court (ICC) then adjudged as imperialist tool of the West.
The plot, which faced stiff opposition from other leaders, went nowhere.

In July 2010, ousted Sudanese President Omar-al Bashir, who was wanted by the Hague based ICC, visited Chad, a signatory to the Rome Statute which established the world court, for three days, and was warmly welcomed by President Deby much to the chagrin of Western powers that wanted N’Djamena to take the elusive Bashir in. The last time Chad and Uganda featured in the same sentence was in December 2018, when the United States Department of Justice indicted former Hong Kong Home Affairs Secretary, Patrick Ho Chi-Ping, of corrupt practices.

He was prosecuted for and convicted of offering 2m (Shs7b) bribe to Chadian President Idris Deby “to obtain valuable” oil deals and separately doling out ($500,000 (Shs1.8b) to Uganda’s Foreign Affairs Minister Sam Kutesa, a pay-out prosecutors argued was calculated to secure business favours in Kampala, including the potential acquisition of Crane Bank.

SEIZING POWER
The year 1990:
Former army chief turned-rebel leader, Idriss Deby, seizes power in December 1990 when his troops enter the capital N’Djamena and send dictator Hissene Habre fleeing into exile in Senegal. After six years of transition towards democracy, he is elected president in 1996 in Chad’s first multi-party election, bringing some of the political opposition into government.
He is reelected in 2001 but comes under increasing pressure from the Opposition accusing him of election fraud and human rights violations. A 2005 referendum approves changes to the constitution to remove limits on presidential terms.

Ugandans have a tilt towards humour, and even in the hardest of times will have something to trigger laughter