Advertisement
By Nobert Atukunda
More by this Author

At least 26 High Court judges have been transferred in a reshuffle made by the Principal Judge Flavian Zeija yesterday.
The new changes will be effective starting February 22.
In a statement yesterday, the Judiciary said the new changes will see the current head of Criminal Division of the High Court, Justice Wilson Kwesiga, concentrate on winding up his pending judicial work within the division as he prepares for his retirement this year.

“The judges transferred are required to complete matters that are in advanced stages before the handover and relocation to the new stations. They should not take on new files,” Justice  Zeija said in the statement.
Mr Solomon Muyita, the Judiciary principal communications officer, said the judges were transferred on account of being close to retirement, redeployment after sick leave, serving at one station for more than three years but also to improve service delivery.

“The other changes will see redeployment of Justice Andrew Bashaija, who has been away on sick leave, to the High Court’s International Crimes Division as deputy head, where he will replace Lady Justice Jane F. Kiggundu, who is on transfer to Mbarara as a resident judge,” the statement further reads. 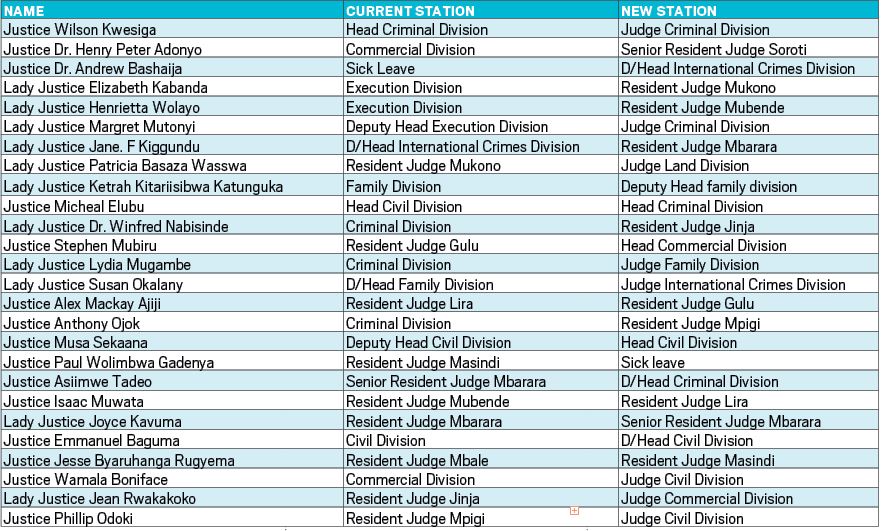 Justice Michael Elubu, the current head of the Civil Division, will take over the Criminal Division. He will be deputised by Justice Tadeo Asiimwe, former Mbarara senior resident judge, who will replace Lady Justice Flavia Senoga Anglin, who retires next month.