Lawyers of the National Unity Platform (NUP) candidate, Robert Kyagulanyi alias Bobi Wine who lost last week’s presidential election after Electoral Commission declared President Museveni as the winner, say they have filed an application in the High Court in Kampala, to secure his freedom.

Bobi Wine’s home is surrounded by security deployed to restrain his movement as a “preventive measure” following intelligence police received about planned riots and protests countrywide, according to the Force’s spokesperson, Mr Fred Enanga.

“We have filed an application of habeas corpus (a court order demanding that a public official such as a warden deliver an imprisoned individual to the court and show a valid reason for that person's detention). From the night of January 19, 2021, Hon Kyagulanyi and his wife (Barbra Itungo) have been detained in their own home by security agencies who include officials of the UPDF and Uganda Police Force. In our communication with him, he agreed that we file for this application (habeas corpus) so that he can be allowed to enjoy his liberty. The judge has given us January 21, 2021 at 10am to hear this application,” Bobi Wine’s lawyer, Mr Anthony Wameri told journalists in Kampala.

According to the lawyer, the musician turned politician was starving since security operatives had denied everyone access to his home since last week.

“He and his wife are starving and can’t access food. This application is a matter of urgency,” Mr Wameri added. 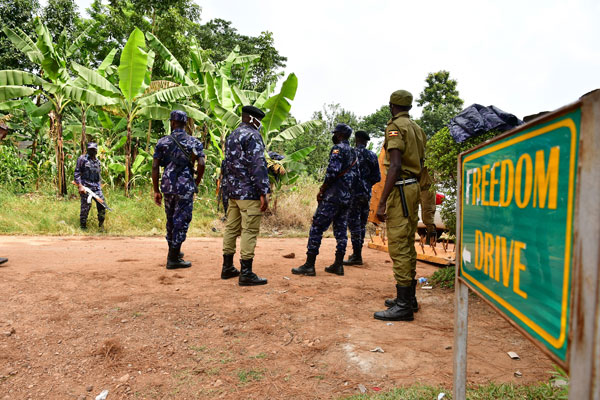 Moments later Mr Kyagulanyi tweeted: "Day six under house arrest and we're still stuck with an 18-month- old baby who had paid a visit to her auntie (my wife) before we were raided and besieged. The Dad has been denied access to her. We have run out of food and milk. No one is allowed to leave or come into our compound."

This publication understands that the US diplomats yesterday intended, among others, to deliver groceries to Bobi which, if true, would have been an answer to clarion call by activists on Twitter to foreign diplomats accredited to Kampala to re-stock supplies for the politician’s family that security forces have kept off-limits from Ugandans.

Bobi Wine’s confinement is not a new tactic in Uganda government’s rule book in suppressing main political challengers who aim to challenge results of presidential elections in court.

On the day of voting during the 2016 elections, security grabbed then presidential candidate Kizza Besigye, who alleged that the ballot had been rigged, and placed him under house arrest for more than 40 days and freed him after the period to file election petition had lapsed.

It is unclear if Bobi Wine, who has declared his intention to challenge results of last Thursday’s presidential election, will be contained at home for as long as Dr Besigye and lose the opportunity to gather evidence. Police and army yesterday ringed off the NUP headquarters.