In his condolence message to Aggrey’s brother, Mr Moody Awori, former Vice President of Kenya, Mr Odinga reminiscences that their two families have a long history of friendship that started with their parents, Jaromogi Oginga Odinga and Jeremiah Musungu Awori, the pioneer African Canon of the Anglican Church in Kenya.

“As a young boy, I witnessed Canon Awori as a constant presence at our home to offer prayers whenever Jaramogi had a function. Out of the large Awori family, Aggrey became my closest friend out of these initial ties. We join the Awori family and the people from all around the region in giving thanks for Agrgey's remarkable life of service particularly to Kenya and Uganda,” Mr Odinga writes in a letter he tweeted Tuesday afternoon.

The veteran politician said he worked with Aggrey at University of Nairobi and witnessed him start the now famous school of journalism from scratch. 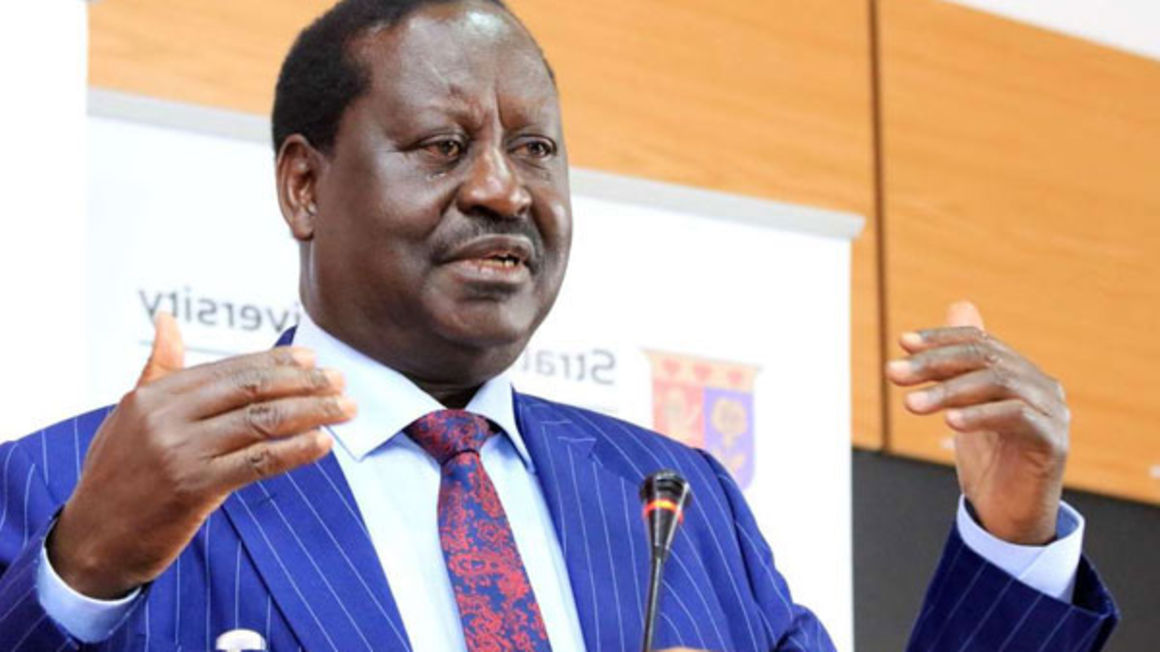 “He had come back to his Kenyan roots when Uganda became too hostile under Idi Amin's dictatorship,” Mr Odinga added.

Awori, 82, died at TMR International Hospital in Naalya, outside Kampala.

Harvard-educated, an unsuccessful presidential contender and long-term Opposition legislator, Awori distinguished himself in track and field events, scaling the heights to participate in the  Summer Olympics of 1960 and 1964.

As a national leader and an avid reader, if Awori was not flipping pages, he would be fraternising with people of all backgrounds, animating in his guttural voice and cracking that laughter roaring from the depth of his chest.

His elder Moody Awori may have served as Kenya’s ninth Vice President under Mwai Kibaki, but the younger brother gained fame in Uganda for his pluck in national politics to intelligibly argue out President Museveni or his government’s policies, both in and outside Parliament.

In later years, that stubborn Uganda Peoples Congress party spirit melted away with age and collapsed into the fold of reality, converting the erstwhile Museveni political nemesis to a darling to whom the President dangled a Cabinet slot.

It was not only political conversion. Awori snapped up a Porsche convertible to cement his love for European cars. His previous powerful rides included Mercedes Benz, BMW, Jaguar, and Sitron.

“He ate life with a big spoon,” his son and Toyota Uganda General Manager Baisama Awori said last night of his father.

Mama @IdaOdinga and I have been deeply saddened by the passing of our long-standing family friend Hon. Aggrey Awori.

Aggrey was a true manifestation of the spirit of East African integration and Pan- Africanism. pic.twitter.com/Kaq7sDEPp5

The departed was a national leader and politician, but to family, he was, in Baisama’s words, “a maverick, very kind, extremely courageous and a man of rare talents”.

“Our regret is that he never wrote a book,” Mr Baisama said.

His sister Nafula Awori, a real estate expert, said their father was booked at TMR International Hospital on June 29 after days of being on oxygen at home.

Awori had a kidney problem, for which he required a dialysis yesterday. He was hypertensive and suffered associated infirmities of advanced age before he caught Covid.

“When we brought him to TMR International, he was really ill. He gasped for air, but the quality of care was excellent. The battle started immediately. He was taken to Intensive Care Unit (ICU) and put on life support. The care was round-the-clock and TMR is outstanding. I have absolutely no reservations,” Ms Nafula said.

In ICU, Awori fought the battle with courage the way he did in Opposition politics. His family in Uganda and siblings in Kenya were either by his side or checking on him through telephone calls and, as a result of what Ms Nafula described as a “collective battle”, the Octogenarian appeared to pull through.

The family clung to hope and showered him with love.

Then unexpectedly, his condition deteriorated. He began gasping for air again, the heart beat weakened and with the fading ensued panic followed by a dash to resuscitate him.

At 1:52pm yesterday, doctors pronounced him dead, Ms Nafula said, with the official cause of death being “cardiac arrest”.

A long, torturous as well as an expensive struggle to save the life of the family patriarch had motioned painfully and with speed to a jolting stop.

“He died so lovingly and calmly. Dad wanted to see people move forward and excel and he did it (support others) due to the love in his heart. He was such a giving person; he was never calculative or manipulative. His was that heart of giving of yourself and not giving when expecting [something in return,” Ms Nafula said, before breaking down on the phone. 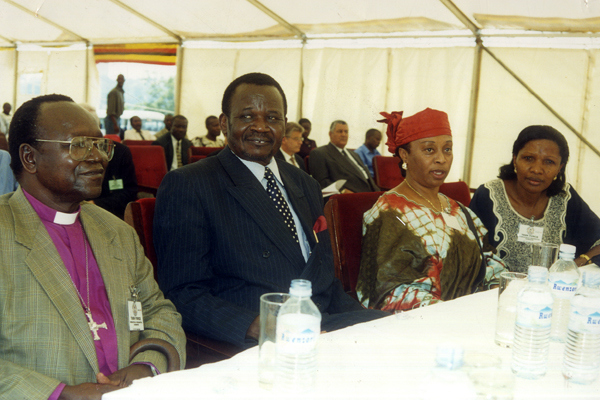 Rt Rev Cyprian Bamwoze, the first Bishop of Busoga Anglican Diocese (left, RIP), Aggrey Awori and his wife next to him at the 2001 presidential nominations at Kololo Independence Grounds on January 9, 2001. PHOTO/FILE

Between sobs, she added: “The nature of his (Awori’s) heart is what I would wish other politicians to take forward. The nature of his pure heart and character should be the greatest legacy for our family, communities and the nation.”

When news about the passing on of Awori began to spread yesterday afternoon, tributes began pouring from near and far, from the lowly in society to the higher-ups.

The State Minister for Information and National Guidance, Mr Godfrey Kabbyanga, said: “It is a sad moment to learn of the death of ndugu Aggrey Awori, who was once a minister of ICT from 2009 to 2011. The nation has lost a bright man in him. May the Lord strengthen his family members at this trying moment.”

Mr Musa Ecweru, the State Minister for Refugees, said “Aggrey was a very intelligent man. He also had the culture of being very frank. He always spoke his mind, whether he was wrong at some points. He was not the type of people who hide their feeling”.

Mr Awori, who was voted the best legislator in the sixth Parliament, lost to Mr Stephen Mugeni Wasike in the subsequent election. He later crossed to the ruling (NRM) party from his childhood Uganda Peoples Congress (UPC) party, and in 2011 took a shot at the Busia Municipality seat which he also lost to Ms Kevinah Taaka Wanaha, a Forum for Democratic Change (FDC) leaning candidate.

Constitutional lawyer and UPC faction leader Peter Walubiri said Mr Awori died when his body was in NRM party, but his spirit was still with UPC.

“Awori made his contributions. He was a pillar at least in the 1960s and the early 80s of the UPC party. He served in Parliament and time came and he left the party. We were hoping that one day he would find his way [back] home. But it is unfortunate that he passed on before returning,” he said.

He added: “We shall surely miss him as a party. We shall be praying for the repose of his soul and we shall be sharing the hard moment together with his family”.

A family meeting is due today to discuss burial arrangements for an illustrious son of Busia survived by 8 children.

In eulogies from the east, Mr Geofrey Mbulu, a staunch UPC supporter, said Mr Awori was a great politician and orator who changed the minds of his opponents at rallies to vote him.

“He was endowed with eloquence and was such an informed politician, his oratory skills made him a darling of many Busia residents,” Mr Mbulu said.

Ms Betty Aol Ocan, the former leader of Opposition, said: “When he decided to cross to the NRM party, I kept on wondering why he did that. He needed to strengthen UPC and Opposition. I had wanted him to live to see if there will be change and a peaceful one [in Uganda], but he has not.”

Awori was born on February 23, 1939, in Budimo Village, Busia District, near the Uganda-Kenya border as the 10th of 17 children. His parents were Canon Jeremiah Musungu Awori, a pioneer African priest of the Anglican Church in East Africa and Ms Mariamu Odongo Awori, a nurse and community teacher.  His siblings include the ninth Kenyan vice-president Arthur Moody Awori and Mary Okelo, the first woman in East Africa to head a Barclays Bank branch and the founder of Kenya’s women only bank; the Kenya Women Finance Trust. Ms Okelo is also the founder of Makini Schools, a leading school chain in East Africa. Awori owned an urban home in Busia Municipality and a country home in the neighbouring Bugiri District. He attended Nabumali High School in Mbale District and King’s College Budo, in Wakiso District both in Uganda. While at King’s College Budo (1959 to 1961),  Aggrey was selected among a few others for elite military officers training at Sandhurst Military College in the United Kingdom. His father Canon Awori, however, rejected the idea of his talented son joining the military.

From 1961 to 1965, he studied at Harvard University on a scholarship. The first year he took nuclear physics, but then switched over to political economy.   While at Harvard, Awori became the first person in heptagonal track history to win three events - the long jump, high hurdles, and 60-yard dash, tying the heps record in the hurdles and setting the mark in the dash. He also ran on the victorious mile relay team that tied the heptagonal record. By the time he graduated from Harvard,  Awori held three outdoor and five indoor school records. He also represented Uganda in the 110-metres hurdles at the 1960 Summer Olympics and the 1964 Summer Olympics, but failed to win any medals. Awori had a Master of Arts in economics from Syracuse University, also in the United States. In 1967, Awori was appointed the first local director of Uganda Television (UTV). In 1971, he was jailed for two months after Idi Amin’s coup, because during Amin’s first coup attempt, he didn’t broadcast a speech Amin gave, lying to him they were live-on-air.  He went into political exile in Kenya, where he taught political journalism at the University of Nairobi until 1976 .

After Idi Amin was overthrown in 1979,  Awori returned to Uganda.  He ran for a seat in the National Assembly of Uganda, but lost. He then became Ambassador to the United States, until being transferred by Tito Okello Lutwa in 1985.  He served as Uganda’s Ambassador to Belgium from 1985 until 1987, when he was dropped by President Museveni.  After a brief asylum in Nairobi,  Awori started to build up a rebel group operating from eastern Uganda named Force Obote Back Again (FOBA).  He stated that his reason for doing so was mainly anger at Museveni’s National Resistance Army (NRA),  which had confiscated his property.  He was married to Thelma Awori, who worked as director for Africa at the United Nations Development Programme.

The late Francil Ekalungar’s widow, Ms Christine Nabwire thanked God and the courts of law for dispensing justice for her late murdered husband

The accused include; Francis Kayemba, Peter Ochieng and Vincent Muwonge alias Bbaale who is a crime preventer in the Masaka City