Advertisement
By Our Reporter
More by this Author

Victims
Most people fall victim to thieves when they are inside vehicles and cannot get the time to pursue the criminals or seek help instantly. Even those who have attempted to chase the thieves end up being assaulted by the same criminals.
Most of the cases under police investigations point at delinquents operating in groups.
Some of the robberies involve street children armed with knives.

The group chooses a member who appears weak in that he will not raise suspicion if he comes closer to someone holding a smartphone.
The boy will then snatch the phone from the unsuspecting victim and walk away.
As he walks away, he is being monitored by his fellow gangsters, who are usually able-bodied. When a victim attempts to run after the boy, the gang will attack and beat him or her up.

Despite the heavy presence of both the police and army on all the main roads in the city, the offence still remains rampant in the Kampala Metropolitan area.
Most of these stolen phones end up in markets in neighbouring countries such as the Democratic Republic of Congo and South Sudan.

Notorious spots where your phone could be snatched:
Ben Kiwanuka-Clock Tower-Kibuye stretch
Taxis are often held in traffic jams for more than an hour. Most taxis, if not all, have no air conditioning which forces passengers to open windows wide for fresh air. Phone snatchers take advantage of when passengers are using their phones near the open windows.

Kibuye-Katwe-Kalitunsi-Clock Tower
The stretch has slow vehicle traffic and has many getaway alleys which the criminals use to run away.
Ben Kiwanuka Road (Arua Park)
People operating on this street literally never go to sleep, except recently when the coronavirus outbreak was confirmed in the country and lockdown measures were announced. It is always busy. But at night, criminals roam the streets. Despite the street lighting, muggers are there in big numbers. It is the main terminal for South Sudan-bound trucks.

Hoima Road (known as Namirembe Road)
It is a busy road/street with three major bus terminals and a taxi park. Even deep in the night, public service vehicles continue to drop passengers. Criminals target unsuspecting people, snatch their property and run into slums of Kisenyi, where it is very difficult for the victims to pursue them.

Yusuf Lule Road
Yusuf Lule Road is one of the best roads in the city centre with double lanes and good walkways. It is ideally a safe place for affluent joggers in the evening. Being a shortcut from Mulago area to Jinja highway, some pedestrians use it to cut costs and time. Unfortunately, in the evening it becomes dangerous for pedestrians. Muggers carry out attacks and disappear into the dark Golf Course.

Entebbe Road (Clock Tower)
Traffic is usually heavy and slow in the evening, giving criminals the opportunity to snatch phones and handbags. Their main targets are lone pedestrians and people talking on mobile phones in vehicles with lowered windows. Their gate away places are the railway line and water channels.
Nakivubo Road
It is a stretch from Entebbe Road from Indian Temple to Namirembe Road/Hoima Road. Given the fact that there are many police booths along the stretch, thugs snatch property and jump over the Nakivubo Channel barrier along the stream. Most victims can’t dare pursue them.
Nakivubo Mews
This road connects the Old Taxi Park to Nakivubo Road. Most of the people in this street are traders since it is a business hub. People often carry money or valuable property on them. Such people are targeted by criminals and it is risky to carry a laptop bag or an expensive phone at night.
Access Road
This road is a short stretch from Kitgum House to Mukwano Roundabout. At night it is deserted and well-lit. Criminals at night come in groups and overpower their victims. After they have got their loot, they run to the adjacent railway line. Police officers at Electoral Commission (nearby) rarely intervene in the pursuit.
Allen Road and Mackay Road
Allen and Mackay roads sandwich the New Taxi Park on both sides. Criminals target passengers walking with valuables from or to the New Taxi Park and Qualicel Bus Terminal. The groups operate in teams of three or more. They attack their victim at once. 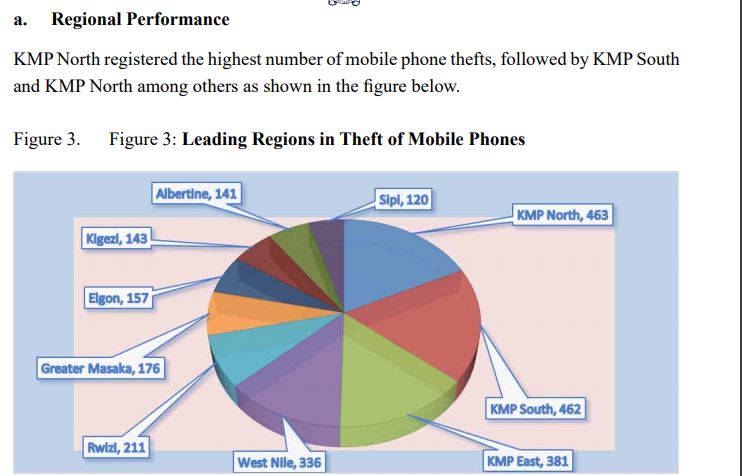 Nkrumah Road
Unlike the adjacent Nasser Road, Nkrumah Road isn’t well-lit. The only source of light comes from shops. Lone pedestrians suspected to be carrying expensive electronics are attacked by stout criminals who escape to the railway premises which are largely deserted.

Skating banned
Police have banned skating and anybody found skating on roads in Uganda will be prosecuted.
Deputy Police Spokesperson Polly Namaye said road skaters who hold onto people’s vehicles snatch things from the cars.
She said skaters normally snatch laptops, phones, bags, side mirrors, bunches of matooke and charcoal from trucks.
“We have given instructions to all our traffic officers to caution the roller speed-skaters on the roads that they will be arrested. They have been banned due to public demand that many of them are thugs,” she said.

Police statistics
A total of 4,043 cases of mobile phone thefts were reported in 2020 compared to 5,630 cases reported in 2019, giving a decrease of 28.1 percent, according to the latest annual police report on crime.
Police said the districts of Gomba, Zombo, Lamwo, Omoro, Kwania, Kitagwenda and Katwe Kabatoro Division did not register any case of theft of mobile phones in 2020.

The President reopened places of worship with strict guidelines, including limiting number of worshippers to 200, ensuring physical distancing of...

NRM supporter sentenced to one month for attempting to self-immolate