Queen Elizabeth II opened a new session of parliament on Tuesday, in her first public appearance since the funeral of her late husband Prince Philip, as she revealed the Conservative government's post-pandemic legislative agenda.

Prime Minister Boris Johnson, buoyant after his party's triumph in local and regional elections in England last week, is vowing to deliver on his mantra to "build back better" with a wide-ranging raft of policies.
But he faces renewed questions over the UK's cohesion after pro-independence forces won a majority in elections to the Scottish parliament with pledges to hold another referendum on breaking away from the centuries-old union.

Johnson's government, after rolling out a successful coronavirus vaccination drive, is intent on reopening the economy and refocusing on long-term promises to "level up" prosperity across Britain.
"My government's priority is to deliver a national recovery from the pandemic that makes the United Kingdom stronger, healthier and more prosperous than before," the 95-year-old monarch said in a speech from a gilded throne in the upper House of Lords.

Borders focus
The Queen said the government would introduce an environment bill to set legally binding emissions targets as Britain prepares to host the UN's COP26 climate summit in Glasgow in November.
A "counter-state threats bill", meanwhile, will provide the security services with tools to tackle hostile activity by foreign states and foreign actors.
New measures will also aim to strengthen Britain's borders and deter "criminals who facilitate dangerous and illegal journeys", after rising numbers of asylum-seekers coming on boats across the Channel from France.

Tightening immigration rules and securing borders were vote-winning promises of Johnson's campaign for leaving the European Union in Britain's 2016 Brexit referendum, as well as in securing his thumping 2019 election win.
But by differentiating between asylum-seekers who enter by legal channels and those who enter Britain from "safe" destinations like France, the government has provoked anger among refugee groups.

The UN refugee agency UNHCR has said the proposals could breach international law and be "expensive and hard to implement".
But Johnson's spokesman has insisted the plans comply with all laws.
Meanwhile, ministers will legislate to address racial and ethnic disparities, ban gay conversion therapy, enhance animal rights and help more people to own their own home.
The government will also implement the fastest-ever increase in public funding for research and development and establish an advanced research agency. 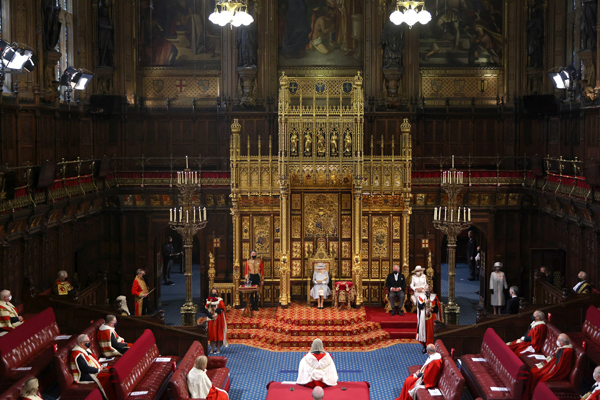 Britain's Queen Elizabeth II reads the Queen's Speech on the The Sovereign's Throne in a socially distanced House of Lords chamber, during the State Opening of Parliament at the Houses of Parliament in London on May 11, 2021, which is taking place with a reduced capacity due to Covid-19 restrictions.

'Historic opportunity'
Normally an annual event replete with five centuries of tradition and pageantry, which last occurred in late 2019 amid political acrimony over Brexit, the monarch's state opening of parliament was scaled back this year due to the pandemic.
This meant far fewer attendees and the Queen travelled to Westminster by car instead of in a horse-drawn carriage. She also wore a powder-blue day dress and feathered hat instead of robes and a crown.

Only a select few from parliament's two chambers were allowed to attend to maintain social distancing, and those present needed to have tested negative for Covid.
The Queen - Britain's longest-serving monarch -- was accompanied by her 72-year-old son and heir, Prince Charles, as she returned to public duties three weeks after the Duke of Edinburgh was laid to rest. He died last month, aged 99.

Johnson said separately that countering coronavirus remained the "number one priority" but insisted the recovery provided a "historic opportunity to change things for the better".
"As the United Kingdom gets back on its feet, we will turbo-charge our economic recovery in every part of our country, increasing and spreading opportunity," he added.

Union future
In her speech, written by the government, the Queen also detailed plans to "strengthen the economic ties across the union", in part by improving national infrastructure.
The monarch's role is to stay above the political fray but the future of her kingdom could be at stake after the election results north of the border gave new impetus to the pro-independence Scottish National Party (SNP).
When Scots last voted on the question of quitting the UK in 2014, Queen Elizabeth issued a guarded remark for voters to "think very carefully about the future".

They opted against independence then, and Johnson's flat rejection of SNP demands for a fresh referendum threatens to open a new constitutional crisis in the queen's post-Brexit realm.
SNP leader Nicola Sturgeon said on Sunday that it would be "absurd and completely outrageous" for the UK Supreme Court to have to step in and adjudicate on any referendum's legality.