Advertisement
By Franklin Draku
More by this Author

He has described himself as a Ssabalwanyi, or master fighter.
It was not a battlefront title, but one he conferred upon himself in October 2011 while rubbishing allegations made by a Tullow official that they believed the President likely received inducements from an Italian oil firm, Eni, to influence Uganda’s decision-making about the nascent sector.

Gen Yoweri Museveni, the founder of the National Resistance Army rebel group that brought him to power in 1986, is a man of many hats from which the feather of war shines.

He is one of few sitting presidents to be spotted in public clutching an AK-47 assault rifle or donning military fatigue, with a four-star general’s full insignia, to attend a civilian and religious function.
That is Uganda’s leader of 35 years: a former rebel leader-turned-president who transformed the rag-tag fighting band into a formidable multi-force and modern military renamed the Uganda People’s Defence Forces (UPDF).

As the country’s top diplomat, Gen Museveni has injected the army into the heart of Uganda’s politics and as a vanguard of foreign policy by deploying them over the years in neighbouring countries and region.

NRA rebel leader
Whereas the 27 or so rebel groups he has defeated during his reign could be considered as wars of self-preservation and regime survival, Gen Museveni has retailed foreign military interventions as key to securing Uganda, defending pan-African brothers and sisters and insuring the future of Africa against external meddlers and aggressors.

To him, the wars he has fought, more pronounced from 1981 over disputed elections a year earlier, are just wars to which he was provoked.
That five-year guerrilla war in the Luweero Triangle resulted in the deaths of thousands and catapulted Gen Museveni, a former teacher and intelligence officer, into power on January 25, 1986 (although the official record is January 26).

The ascendency to state power by a man who toppled Gen Tito Okello’s short-lived junta, was not going to be welcome by all, more so in northern Uganda, the cradle of the deposed leaders. And it showed shortly afterwards in a way that illuminated the north-south divide and consigned mainly Acholi land to near two-decade insurgency, destruction and deaths.

Seven months after he captured power, Alice Auma Lawkena, a woman who claimed to be a medium with mystic powers, on August 10, 1986, began an eclectic fight to topple Museveni.

With headquarters in Pader, the Holy Spirit Movement, whose fighters smeared themselves with shear nut oil in the belief the oil would melt bullets, made startling frontline gains, coursing up to Jinja – some 90 kilometres to the capital, Kampala – from where they were defeated in 1987.

Lakwena fled to, and lived in, Kenya until her death on January 17, 2007.
Shortly after Auma’s military failure in Jinja, Severino Lukoya, her father, started a fresh rebellion in Kitgum under the guidance of the ‘holy spirit’.
But unlike his daughter, Lukoya was weak and his group atrophied almost immediately.

LRA rebellion
When that fight collapsed, a one Joseph Kony, a former altar boy variously reported as a cousin of Lakwena, started the Lord’s Resistance Army (LRA) group in 1987 to wage war against Museveni’s government.
Kony proclaimed himself the “spokesperson” of God and a spirit medium and his fighters quickly built a reputation of savagery and mass murders against the locals whom he accused of not supporting him.

After years of fighting, the LRA rebels in 2005 fled first to South Sudan and onwards to Garamba parklands in the DR Congo from where they made incursions into the Central Africa Republic.
Kony forces are much diminished, with many of his top lieutenants having either been killed, captured or defected, and the bands in the bush keep escaping more for their own survival.

ADF attacks
The Allied Democratic Forces (ADF) insurgency began in 1995, intensifying in 2013, resulting in hundreds of deaths through indiscriminate bomb attacks in Kampala and elsewhere.
The ADF was formed by Jamil Mukulu, an ultra-conservative Ugandan Muslim, belonging to the Tablighi Jamaat group. Formed in 1989, ADF carried out its first attacks in 1995.

The conflict gradually intensified, culminating in the 1998 Kichwamba Technical College attack, which left 80 people dead, with 80 more being abducted.
Mukulu was born as David Steven and was baptised as a Catholic, later converting to Islam, adopting a Muslim name and becoming radicalised. 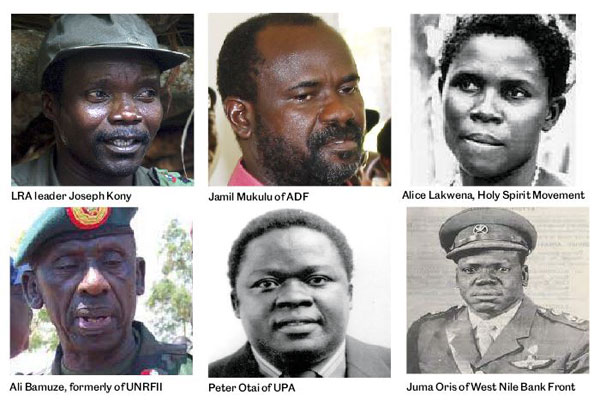 He reportedly spent the early 1990s in Khartoum, Sudan, coming into personal contact with Osama bin Laden, the Al Qaeda founder.
Jamil Mukulu has since been arrested, and is facing a string of charges in Uganda’s court martial, but Uganda’s intelligence and security agencies regularly claim that the ADF is regrouping, posing low-intensity threat to national security.

UNRF II
The Uganda National Rescue Front II (UNRFII) broke from the West Nile Bank Front in 1996, and included members of the original UNRF that did not make peace with Mr Museveni.
Led by Maj Gen Ali Bamuze, the group operated mostly in the then Aringa County, Arua District, out of bases in southern Sudan, and received support from the Sudanese government in retaliation for Ugandan government support for the Sudan People’s Liberation Army.

On December 24, 2002, the UNRF II signed a formal ceasefire with the government in Yumbe District.
Its former leader, Ali Bamuze, who had been integrated into the UPDF as a Major General, collapsed and died suddenly on October 4, 2015.

By the end of 1990s, the group had been defeated, its leader Juma Oris fled to Khartoum, Sudan and one prominent associate of the WNBF was allegedly Isaac Lumago, a former chief of staff of Uganda Army, who disappeared and later died.

However, his rebellion was later crushed and he fled to Nairobi, Kenya from where he connected to Denmark.
From Denmark, he went to Germany where he became a Rastafarian. He died in exile in Germany.

FOBA
Force Obote Back Again, FOBA, was formed shortly after the overthrow of Tito Okello. It was one of the earliest insurgencies that emerged in Teso during this time and as early as January 1986, local leaders prepared for an uprising.

Led by Nelson Omwero and Charles Korokoto, they organised a rebel group known as FOBA. However, FOBA quickly began to lose popular support and splintered after beginning its uprising.

The political wing was led by Eric Otema-Allimadi, former prime minister in the Obote government. The UPDA launched its first offensive into Uganda on August 16, 1986 in Kitgum District.
However, the UPDA proved to be indisciplined, and prone to violence and looting. It gradually lost civilian support and cohesion; its fighting ability gradually whittled away during the following months.

PRA
People’s Redemption Army (PRA) was a shadowy group, allegedly formed by renegade Ugandan army officers, and estimated to consist of around 2,000 fighters. The people who were said to have formed the rebel outfit denied any links with it.

Four-time presidential contender, Dr Kizza Besigye, was arrested on November 14, 2005 on accusations of  being the “political leader of the PRA”.  Dr Besigye denied any links with PRA, and accused the government of conjuring up the rebel group to frame him.

Following the raids, the Omusinga (king) of Rwenzururu, Charles Mumbere, was arrested and charged with murder. The kingdom remains in paralysis and the king confined in exile in another kingdom, Buganda.

NALU
The National Army for the Liberation of Uganda (NALU) was formed in 1988 in western Uganda and later on moved into eastern DR Congo.

It was mainly composed of remnants of the Rwenzururu movement led by Amon Bazira, a former Obote minister together with former Amin’s soldiers with logistical and other assistance from the late Juvenal Habyarimana of Rwanda.
Bazira enlisted the financial support of the Kenyan and DR Congolese governments to renew the resistance against the new government under the National Resistance Movement (NRM).

Bazira was assassinated between Nairobi and Nakuru in 1993 and in 1994, after the death of Habyarima, the group was weakened. Habyarima died in the plane crash as he returned from Arusha, Tanzania where he had made a peace deal with rebels of Rwanda Patriotic Front commanded by Paul Kagame.

The Uganda People’s Defence Force drove the NALU into the DR Congo, where the remnants joined with the Allied Democratic Movement and the Uganda Muslim Liberation Army to form the ADF, with the sponsorship of the Sudanese government.

The Uganda People’s Army (UPA)was formed by several self-defence groups in the Teso region who united to oppose the NRA.
They appointed Peter Otai as overall leader and Francis “Hitler” Eregu as military chief. Other notable UPA leaders included Musa Ecweru, the current state minister for refugees and a one Nathan Okurut.

The war resulted in the independence of  South Sudan six years after the war ended.
Sudan accused Uganda of  backing the SPLA and in process started funding the Lord’s Resistance Army led by Joseph Kony to fight the Museveni government.

Congo invasion
The first Congo War (1996–1997) drew in different actors, including Uganda and Rwanda.
The conflict culminated in a foreign invasion that replaced Zairean president Mobutu Sese Seko with the rebel leader Laurent-Désiré Kabila. This was followed by the second war of August 1998 that lasted for several years.

The Six-Day War
This was a series of armed confrontations between Ugandan and Rwandan forces around the city of Kisangani in the DR  Congo from June 5-10, 2000.
The war formed part of the wider Second Congo War (1998–2003).

Kisangani was also a scene of violence between Rwandan and Ugandan troops in August 1999 and May 5, 2000. However, the conflicts of June 2000 were the most lethal and seriously damaged a large part of the city, with more than 6,600 rounds fired.

According to Justice et Libération, a human rights organisation based in Kisangani, the violence resulted in around 1,000 deaths and wounded at least 3,000, the majority of whom were civilians.

Somalia assignment
Uganda was the first and remains the largest troop contributor to the African Union Peacekeeping Mission in Somalia (Amisom). Its forces, joined later by armies from Burundi, Kenya and other African countries, dislodged the al-Shabaab from Mogadishu, chasing them into the hinterland.

While Somalia has somewhat stabilised, concerns remain about the future the ability of the Somali National Army to keep the country in one piece. Elections which were due to be held have been controversially deferred by two years, triggering a political crisis and a return of bombing attacks.

South Sudan civil war
The South Sudanese Civil War was a multi-sided civil war in South Sudan between forces of the government and opposition forces. In December 2013, President Kiir accused his former deputy Riek Machar and 10 others of attempting a coup d’état.

Machar denied the coup plot and fled to lead the SPLM – In Opposition (SPLM-IO). Fighting broke out between the Sudan People’s Liberation Movement (SPLM) and SPLM-IO, igniting the civil war.
Ugandan troops were deployed to fight alongside the South Sudan government troops, saving Kiir and preventing further bloodshed.