My name is Ibrahim Sserunkuuma and I live and work in Dubai. I am a senior logistics officer at IKEA.

My experience with Covid19 all started in the last week of March 2020.

The spread of the virus seemed at its highest in Dubai at that time, but many of us were still working as the government hadn’t locked down the country yet.

Many people here live in sharing accommodation and this was my situation too. During those days, everyone in the house had either flu or a cough. Concerned, I suggested to the roommates to choose amongst ourselves two people to take a Covid test.

While we agreed that we needed to have tests done, none was willing as everyone feared what the results might be. A WhatsApp message we had gotten said once you get Covid, it would keep eating up your lungs. This scared everyone in the room since we all had either a cough, flu or fever and these were the symptoms of the disease. Nevertheless, no one wanted to be the ones to test. In the end though, I managed to convince Hussein, a fellow roommate to do so with me, for the good of the room.

My employer was offering free Covid tests to its staff so I used that opportunity. Our brother Hakim drove us to the testing centre. On getting there, we felt like going back and not taking the test. We were really scared of the outcome.

But we did it and we were told to wait for the SMS within 24 hours. Everyone in the room was anxious to know the results. I couldn’t sleep that night because I kept thinking what I would do if the results come back positive.

What made it worse was another rumour that said if you tested positive, the government would take you to a facility where you would be given an injection that would kill you slowly.

Those days were really scary.

READ: My Covid-19 story: I tested multiple times to be sure my political enemies were not playing games

Everyone woke and panic ensued in the room. Total chaos begun. Everyone feared the other. We now started wearing masks. In about an hour, my company sent a vehicle and picked me up. My friend Hussein had tested positive however, I didn’t go with him as the driver had instructions to pick only the staff member.

The rest were told to stay indoors as doctors were arriving to test everyone.

Most of us had lost sense of smell, had headaches, cough and flu. Before testing positive, I had flu and cough for close to four days. By the time, I took the test, it had subsided though I had lost my sense of smell completely. 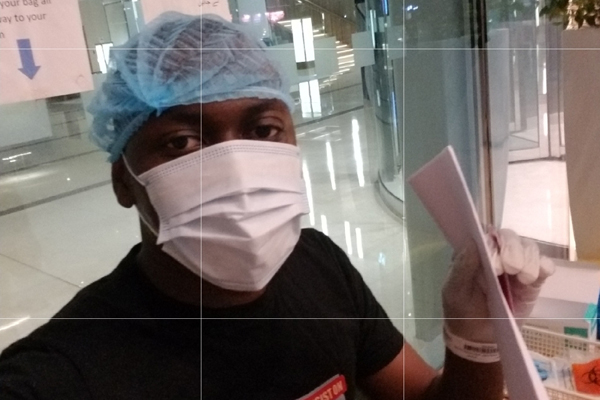 At the isolation centre which was Premier Inn Hotel, many tests were done on me. I was administered with Hydroxychloroquine (HCQ) which I had to take twice a day. I was also given Vitamin D Supplements. I had a terrible headache but I was given Panadol and got better after two days.

I had to take HCQ twice a day and nurses gave me vitamin D supplements and foods that helped strengthen my immunity. I took HCQ for 3 days, then stopped. As days progressed, I didn’t have any symptoms. I stayed in the isolation centre pending a negative test result. The final test was done on April 30. I had to have two negative test results in order to be discharged from the isolation centre and be allowed to return home. Fortunately I tested negative twice and was thus discharged.

I was really lucky to be in the United Arab Emirates at that point. The country has access to the latest medical facilities. Their response and coordination is so fast and professional.

Keeping the news from family

At first, I decided not to tell my family back home because they were more worried than us.

They kept scaring us by sending us WhatsApp videos of people collapsing on roads saying those people were in Dubai.

In fact since it was month of Ramadhan, I sought permission from the doctor to fast since I had no more symptoms and she agreed to it.

Hussein the friend who I took the test with, was picked by the health ministry ambulance and taken to a government facility. The rest of the housemates were told to wait for health officials to test them. The officials didn’t show up however as the numbers of those getting sick were overwhelming, all over Dubai. The roommates eventually gave up. I encouraged them as we communicated virtually, on how I was feeling. I told them the rumor of getting a poisoned injection was false.

Eventually when I was discharged and I returned to the room, many had recovered without any medication.

Many of us are now vaccinated.

I urge people back home to follow the set SOPs .Keep monitoring yourself, don’t take flu symptoms lightly, get it checked and isolate yourself.

It may seem boring but we have to think of people around us. That’s the only way we can stop the pandemic.

Ibrahim Sserunkuuma, is a resident in Dubai, United Arab Emirates.