Advertisement
By GILLIAN NANTUME
More by this Author

Mr David Pulkol, the current Executive Director of the Africa Leadership Institute, and a researcher, is a man who wears many hats. He served as minister for Karamoja Affairs and lecturer at Makerere University. Between 1996 - 1999 and 2001 – 2003, Pulkol was the director general of the External Security Organisation (ESO). As a former insider, Mr Pulkol says the abductions of civilians by Special Forces and other agencies reveal a fundamental intelligence flow.

Yes, I am. To be honest with you, it is not normal for a government to be named among those abducted citizens, or for security agencies to be linked to a crime scene. It is absurd that a government admits that its agents are involved in this [abductions]. It surprises me because citizens have been turned into enemies, yet government exists to uphold the Constitution and secure the lives and properties of its citizens.
But, here you have a situation pitting government against citizens, with the indiscriminate application of naked force to a particular region, in this case, the central region,  it must surprise any peace-loving Ugandan.

I believe those who are abducting people know it is illegal. Why do you think they are doing it anyway?
Those who are currently in the system are getting a bit confused or messed up, or need guidance because this way of doing things – of providing security – is not the right way. It was for reasons such as this that we made sure every police and army officers had a name and number labelled on their uniform.
Their vehicles were clearly marked so that you would know this is the Field Force Unit, traffic police, and military police etc,  so that no room would be given to dubious individuals or groups to use the name of the security forces to commit crimes against citizens, and to give citizens confidence in the security architecture of the country.

But, to see that they are now resorting to using numberless cars and that civilians cannot identify which branch of government is involved, is a dangerous situation. It is dangerous because other criminal elements can now get it since they cannot be traced. That is why it is important for citizens to be kept in gazetted places, where they can be visited and have access to their lawyers. After all, they are only suspects unless proven guilty in competent courts of law.

State sponsored abductions were once a preserve of past regimes …
Yes. To get security systems to resort to methods that we are running away from, methods that are akin to (President Idi) Amin’s State Research Bureau or elements in (President Apollo Milton) Obote II’s government … the past is rich with what we must seek to avoid. I thought Uganda had managed to pull itself out of those dark days, and that it was finally on the path to constitutionalism.

How should existential threats to peace and to the government be handled?
The whole issue here is that you must establish security in a lawful environment. This means that the strategies and actions you take and the decisions you make, must be lawful.
Your first responsibility as a leader of whatever branch of the security services – whether CMI or the Special Forces – is to work within the law. It is not like the end justifies the means; that you can get out of the Constitution or the law briefly, as long as you restore order. That is wrong.

Those who head security agencies must do a rethink because if they embrace this trend, they are putting the county on a downward slope.
There will be accidents and the situation will get out of hand. You may have the guns, equipment, money and ranks, but my brother, my sister, citizens are citizens. We must put them at the centre of any decision-making.

But not everyone who has been abducted is innocent. Surely, some of them could be criminals.
Of course, there are always wrong elements in every society. Even in heaven, these elements existed and they were thrown out; and now we are wrestling with them on earth.
There are always those who don’t respect the law, but they are few. They are less than five per cent; it cannot be a whole tribe or a whole community. 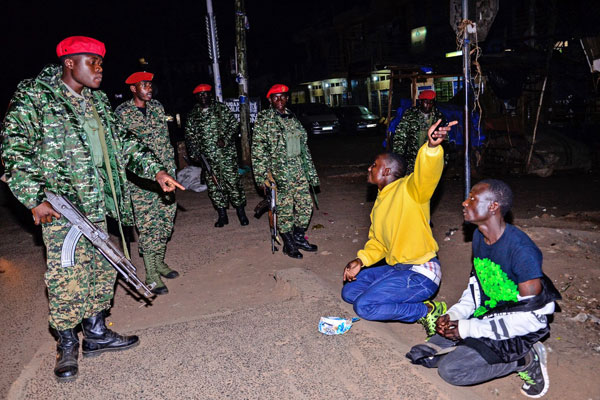 Back then, how were you collecting intelligence?
It is important to know who is planning mischief, how big the group is, what is their command structure, how do they communicate, if you are to disrupt them how do you do it, and if you are to curtail their next harmful action, how do you do it.

They are eroding the legitimacy of elected leaders to govern. This situation should be of concern to those inside government. This way of doing things means you will end up scoring in your own goal, and playing onto the hands of criminal elements.
Even if mistakes have been made, there are ways of getting out of this situation. If government is confident that these people have committed crimes, why not take them to gazetted places? It is important for the NRM [National Resistance Movement] government to get back to those things that distinguished them from past regimes.

I am surprised and concerned that the UPDF (Uganda People’s Defence Forces] – which is a great institution – is having its uniform rolled in the mud like this. They have placed their lives in danger to protect the country, so they should not be the ones caught up in torturing citizens.
The idea of taking abducted people to the court martial is wrong, in my view. How can the army be the complainant, the defence lawyer, the prosecutor, and the judge? This defeats the principles of natural justice. We ought to be ashamed. Let the pillar of the UPDF remain respected, because it is our last resort, in case of anything.

Is the government panicking? Might there be a deeper security threat, on a bigger scale than is visible?
There could be a national security threat which government is trying to deal with. Citizens should, then, be mobilised to support government and security agencies to deal with that threat. However, the methods and strategies used to bring peace-loving Ugandans to work with security forces are different.

In the past, every commander was a cadre and a political commissar. What has happened? Where did this arrogance, authoritarianism, and pride come from? – that you cannot talk to citizens or involve civil authorities, or do things within the law because you have power? Security agencies today are better equipped and more funded than we were back then, how then does this result in poor performance like we see today?

Is there interference in the running of our security services? Panic over what? Even if someone is wearing a red beret with the flag or map of Uganda in it, can government fall over just a red beret? A government that has been in power this long? Is our government so weak and vulnerable that it can fall over a few youth wearing red T-shirts?

In our time, even if a group had 20 guns, we would give guns to some people to infiltrate this group, and then nab them in controlled ways.
Uganda Police Force is 100 years old. Why should it behave like an adolescent? I think we should all calm down and get back to what a military is supposed to do in a democracy.
For instance, the job of the military police is to police the army. Now, if the military police are also out there committing crimes, who will police the army for citizens?

What is the way forward then, out of this political and security impasse? Most of those abducting people appear to be highly trained forces.
I think people are getting out of their mandates. Special Forces worth their name operate behind enemy lines. By now, the Special Forces would have brought [Lord Resistance Army leader Joseph] Kony. That is what Special Forces do – special things.

What is special about Special Forces using a drone to pick up citizens, make them disappear, and then dump them in a swamp? If you lack what to do, please do not do it to our citizens. That because there are no more enemies of the State out there, now you think to be relevant you must be involved here?  I just pray and hope that they are not involved. I hope that what we are reading [in the newspapers] is wrong.

What is your last message to the authorities?
I request the President to put his foot down. This is about your legacy, Mr President. Do not accept anybody to mess our name, our country, and our government. Take a tough stand inside government and outside it to protect the citizens.

For politicians, there must be some things they agree to disagree on, and those they agree on. There must be a country called Uganda. It must be stable, peaceful and its economy must grow.  Not all of us can lead at the same time. If you have not been elected, your constructive criticism should be able to help the country.