Lawmakers and activists have asked government for an in-depth audit to account for trillions of shillings spent on the coronavirus pandemic response.
This follows emerging evidence that the use of the funds meant to mitigate the health and economic effects of Covid-19 was marred with irregularities, poor planning and dubious contract signing.

Government has diverted tax revenue and took on significant loans approved by Parliament between last March and February. Before the country detected its first Covid-19 case on March 22, 2020, Parliament had on March 1, approved a Shs284 billion supplementary budget to respond to the pandemic.
The Ministry of Health got Shs104.2b, followed by Security (Shs77.5b) and Disaster Preparedness (Shs59.4b). Other ministries and agencies that received extra funds include Local Government, which got Shs34b, ICT Shs7b and Kampala Capital City Authority (KCCA) Shs2b, according to the Finance ministry.

Last May the International Monetary Fund (IMF)approved $491.5 million (Shs1.9 trillion) emergency assistance for Uganda under the Rapid Credit Facility. The money was earmarked for health, social protection and macroeconomic stabilisation measures, as well as urgent balance-of-payments and fiscal deficits arising from Covid-19.
The IMF loan raised fears that it would worsen the country’s debt but economist Fred Muhumuza says it was necessary.

“Much as it may, the period for repaying is short because it has a five-year grace period and maturity of 10 years to be paid which would exert pressure on government because we will need about Shs120 billion every year after the grace period has ended to complete payments within the specified date,” Mr Muhumuza said.

The IMF loan was followed by $300 million (Shs1.09 trillion) from the World Bank to boost government’s capacity to fight the spread of the pandemic, purchase testing kits, treat cases and support economic recovery.
In June 2020, a few days before the end of 2019/2020 Financial Year, Parliament approved another supplementary budget of Shs1 trillion to support responses to the pandemic by the ministries of Health, Trade and other government entities, with the Office of the Prime Minister taking Shs45 billion to address the impact of the rising lake water levels and floods with support for social services.

The approval, however, attracted mixed reactions from legislators.
The Ministry of Health was given Shs89 billion to buy test kits and laboratory consumables, transport and allowances for the distribution of facemasks, among others.
The Ministry of Finance was supposed to allocate Shs455 billion as a transfer to the Uganda Development Bank (UDB) for access by private sector as a stimulus package.

“To tourism, they have not yet disbursed. The communication we have from UDB is that they are in the final stages and that we should be ready by the end of this month. At least 93 firms applied and 53 qualified to move to the next stage and we have not got any additional update but they said they would be informing those who are successful by the end of this month,” Ms Byamugisha said.

UDB Executive Director Patricia Adongo Ojangole, said adverts for submission of applications were sent out and the process of disbursing the money is ongoing. She, added, however, that small-and-medium size enterprises that do not deal in primary production are not among the beneficiaries.
“The money we received is not for businesses that are struggling. The package UDB got was for supporting production of essential goods and services in the country,” Ms Ojangole said by telephone.

Last week, Parliament’s Finance Committee during a meeting with UDB, was reported by the Uganda Radio Network (URN) news agency to have tasked the Bank officials to account for the Shs455 billion stimulus package.
Mr Henry Musasizi, the Finance Committee chairperson, reportedly said they wanted particulars of the beneficiaries and how much the bank spent in saving schools.

UDB deputy head Denis Ochieng told MPs that the bank has disbursed Shs202 billion from August to February, according to the URN report. UDB has not yet released the list of beneficiaries of the stimulus package.
In October MPs approved another supplementary budget worth Shs3.729 trillion to cater for critical areas that were not covered in the budget for 2020/2021 Financial Year and the economic pressures posed by the Covid-19 pandemic.

Budadiri County West MP Nathan Nandala Mafabi, queried the amount of money requested by different sectors to fund deficits. He said an extra Shs110 billion was given to the Emyooga Fund, a cash handout scheme run out of State House, yet Shs120 billion had already been approved by Parliament in a previous supplementary budget.
He questioned an additional Shs50 billion which was requested by the Health ministry for Covid-19 response, yet Shs89 billion had been previously approved by the House.
“With the money we appropriated for Covid-19, those who were above the age of six would have received at least three masks by now. Why should we appropriate more money before we get the Shs89 billion?” Mr Mafabi asked.

The October 2020 Covid-19 intervention report by the Budget Monitoring and Accountability Unit (BMAU) in the Finance ministry indicated that although resources were given to the Health ministry for Covid-19 response, there was delayed service delivery and procurement of substandard items in addition to inflating commodity prices.
The report indicates that of the money spent in the first four months of the pandemic by the Ministry of Health, a lot of planned purchases were either not yet delivered or overly priced by companies with poor track records. 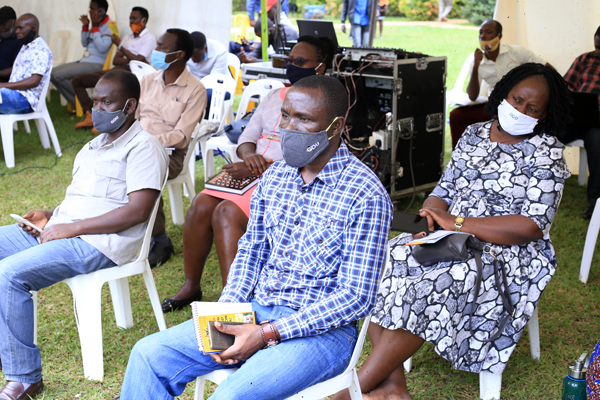 People put on masks provided by the government of Uganda. Some people say they did not receive masks. PHOTO/ABUBAKER LUBOWA

Report findings
The BMAU report revealed that M/s Silverbacks Pharmacy Ltd was contracted to supply and install oxygen plants for Mulago and Entebbe hospitals at a cost of Shs6.4 billion, but that although by June 2020 they had been paid, deliveries and installations had not commenced by September 2020.
“It is worth noting that the same supplier M/s Silverbacks installed oxygen plants in 13 regional referral hospitals in 2017 at the same cost that the government is spending on only two oxygen plants today (FY 2019/2020),” the report reads.

However, the Ministry of Health in response, generalising the BMAU report as malicious, said the plants were delivered in August 2020 not as the report claimed.
“While the Ministry acknowledges that the contract [with M/s Silverbacks] was signed in May 2020, it is important to find out why the delivery and installations had not commenced in the agreed timeline. The general public and the authors of this report are aware that Uganda went into a total lockdown in March 2020 and this greatly affected logistics among others,” the Ministry said in their statement in December 2020.

Whereas more than Shs63 billion has been given to the Health ministry for supplying facemasks to all Ugandans who are above six years, some people maintain that they did not receive the masks.
In February, Parliament approved an additional Shs31 billion for purchasing more facemasks. This was part of the Shs292 billion approved by Parliament. Earlier last year, the Ministry had received Shs32.5 billion for supplying non-medical masks to people aged beyond six years.
Asked last week about the shortfall in distribution of masks, Health minister Jane Ruth Aceng said every district in the country received the masks.

“There is no single district which didn’t receive masks. If there are districts that have not received masks, the challenge may be in the distribution from the district headquarters to the beneficiaries. To the best of my knowledge, it is only Bugiri which didn’t receive adequate masks and we are supplying those masks next week,” Dr Aceng told Daily Monitor.
The approved Shs292 billion also comprised Shs18.5 billion for Covid-19 vaccines that the government is buying from Serum Institute of India.

Food for urban poor
The Shs59.4b that was given for Disaster preparedness entailed supply of food such as beans and posho to people who were affected by Covid-19 lockdown, especially the urban poor.
However, some eligible individuals and MPs say they did not receive the supplies and those who received in Kampala Metropolitan Area said government supplied rotten beans and spoiled posho.

Speaker of Parliament Rebecca Kadaga said in May that the institution would interrogate the quality of relief food. “Since we cannot tell the source of the said rotten beans, I will send a team to investigate the source and quality of beans in areas cited by members,” she said.
It is still unclear whether the said follow up was done since the report is not yet out eight months after.

Irregularities in districts
Although the Finance ministry in April last year released Shs165b to boost Covid-19 surveillance, case management and community education, a number of people say they were not accessing the services.
Up to 70 per cent of people in the Kampala Metropolitan Area told researchers from Advocates Coalition for Development and Environment (ACODE) last year that they were not getting the services.

“Majority of the respondents were not satisfied with the level of accountability by the district taskforces. Specifically, results show that 47 per cent of the respondents were never satisfied with the level of accountability while 44 per cent rated it low,” the study report by ACODE read.
Mr Moses Dumba, the Kamuli District Resident District Commissioner (RDC), who has been transferred to Kyotera District, told Daily Monitor that the funding for activities was meagre and that issues of embezzlement were registered.

“There were some irregularities in how the money was used in the district. After I had battled to find out how the Shs80 million of the response was irregularly spent, it became hard for them,” he said. The response in districts was being led by RDCs, who are part of the Presidency.
The Shs29.6b that the government collected from local donors to support Covid-19 response will be used to build health units, blood banks and buy vehicles, according to the Ministry of Health.

Accountability
Dokolo Woman MP Cecilia Ogwal, in January demanded that all funds as well as the donations in cash and in-kind from the public need to be fully accounted for.
Ms Ogwal’s demand came three months after the Director of Economic Affairs at the Ministry of Finance, Mr Moses Kaggwa, had told this newspaper that they were “undertaking an audit and that the findings will be shared.”
But the Finance ministry has not yet released full audit report on the spending of Covid-19 fund.

Earlier, the Uganda Debt Network executive director, Mr Patrick Tumwebaze, questioned whether the money, most of which was borrowed, was used for the intended purpose.
“Overall, the budget for the multi-sectoral Covid-19 response, between the months of March and June, amounted to Shs2.2 trillion. By June 30, a total of Shs767 billion was received and committed towards Covid-19 prevention and response interventions. But with what we are seeing we might not have gotten value for our money and because of that an audit that should result into prosecution must be done,” Mr Tumwebaze said.

The anti-corruption crusaders such as Mr Arthur Oyako of Anti-Corruption Coalition Uganda and Mr David Kizito of Transparency International Uganda said government has not provided any accountability regarding the use and impact, if any, of the Covid-19 resources to enable citizens follow up and report cases of misuse as and when they arise.