For majority of communities in sub-Saharan Africa that rely on grains and cassava for their main staple food crop, milling is a crucial processing activity. But many of them are not connected to the main electricity grid, making solar milling a viable option, writes Bamuturaki Musinguzi.

Advertisement
By BAMUTURAKI MUSINGUZI
More by this Author

Sarafina Betty Namusobya and Annette Kubonaku Bazibu are among the pioneer users of the eco-friendly solar-powered milling technology in Uganda that is increasing their household income and easing their milling needs for food, animal and poultry feeds.
“The main advantage of this solar mill is that you can mill anytime as long as the sun is shining. Being that this mill is powered by solar, I can now save the money that I would have paid the owner of a diesel-powered mill,” Bazibu says.
Bazibu, who owns Bazibu Farm in Buwenge, Jinja District, says her mill is usually busy after the farmers have harvested their crops.

“This business is seasonal. For example, when the farmers harvest maize, I receive many customers on any given day. I will mill 150kgs of maize on a good day and I charge them Shs150 per kg. I also mill soybean and all other cereals for human consumption, animal and poultry feeds,” she says.
“Being a poultry farmer, I mainly mill for my birds,” Bazibu adds. “I have been milling 250kgs of poultry feed to last me for a week. I recently sold off my layers and I am planning to replace them with another 400 birds.”

Namusobya, who owns a poultry farm in Magamaga in Jinja District, says her solar mill has a capacity to mill 250kgs of cereals per day. She also mills cereals for human consumption, animal and poultry feeds.
“I have been running this business for two months now. I earn on average between Shs30,000 and Shs40,000 per day from milling for other people. This has enabled me to purchase my own mill for my poultry farm to be self-sustaining,” Namusobya says.

“I no longer buy feeds from other producers. Neighbouring poultry farmers buy feed from me. This farm has transformed my home into a source of income when people buy or mill their produce from here. I have also trained fellow farmers in the locality,” Namusobya adds.
“I have a poultry demonstration poultry farm, which is in its initial stage, with about 50 birds. My ambition is to expand my poultry farm to more than 5,000 birds so this mill will not be enough for my business in future,” Namusobya says.

Solar milling in Africa
According to a 2020 report titled “Solar Milling: Exploring Market Requirements to Close the Commercial Viability Gap” by Efficiency for Access Coalition and Energy4Impact (E4I), for the majority of communities in sub-Saharan Africa that rely on grains and cassava for their main staple food crop, milling is a crucial processing activity.
In rural off-grid communities, diesel-powered mills are commonly used to displace the need for manual grinding and pounding.

“Diesel mills have relatively low capital costs and a well-developed supply chain for repair and maintenance. However, diesel mills have high operational costs, are difficult to operate, are less reliable than electric mills, run on engines that pollute the environment, and are not always placed close to their intended users. This increases the time and labour burden for women and children, who are often tasked with food processing,” the report states.

According to the report, electric mills equipped with either alternating current (AC) or direct current (DC)/Brushless DC (BLDC) motors powered by mini-grids or stand-alone solar photovoltaic (PV) systems offer an alternative to diesel mills.
Electric mills are reliable, easy and cheap to operate, environmentally friendly and properly sized to allow more distributed placement, reducing the time and labour burden associated with accessing milling services.
Maize is the most commonly produced cereal in sub-Sahara Africa, representing more than 16 per cent of the 200 million hectares of cultivated land.

In Zambia, maize meal is a staple food, given that the cereal is cultivated all over the country.
ENGIE Power Corner Chitandika solar mini-grid plant has deployed two Hammer Mills and two Dehullers at a cost of $7,500 (Shs27m) under its appliance financing scheme. The mills serve Chitandika community and surrounding villages. During peak periods, the mills are operational from sunrise to sunset and for an average of three hours in off-peak periods.

“There is noticeable interest and willingness to pay for electric powered maize mills as they are perceived to be faster, finer, and have no smell of diesel. It costs around $25 (Shs91,000) to fill a 20-litre container of diesel, which will process around 15 to 20 bags (50kgs) depending on the condition of the diesel mill, while the same amount will process at least 28 bags when connected to electric mills,” the Efficiency for Access Coalition and E4I report adds.

In East Africa, maize accounts for 75 per cent of the area’s total annual harvest of 64 million tonnes. Off-grid smallholder farmers in the region produce most of the maize. According to the Efficiency for Access Coalition and E4I report, many rural off-grid communities rely on diesel-powered milling equipment to process important staple crops.
“Solar-powered maize mills provide a suitable alternative to grid power in areas that are harder to reach by the traditional power utilities or areas that private power companies do not consider to be economically viable in the short to medium terms due to low effective demand for power,” Brian Kawuma, the coordinator of Power for All, Powering Agriculture for Uganda, says.

“In most cases, operators of the conventional diesel or electric-powered maize mills prefer to locate their businesses in the busier commercial centres where they can easily access grid power or diesel for their mills, yet the bulk of maize grain is produced in remote villages far away from the trading centres. Hence, rural smallholder farmers are left to choose between selling their produce on the cheap to commission agents or middlemen or trek long distances to the trading centres so it can be milled,” Kawuma adds.
Power for All is an NGO working to increase and accelerate the role of decentralised renewable energy solutions (DREs) in Africa and Asia.

According to the Efficiency for Access Coalition and E4I report, solar mills offer the ability to mill a variety of grains and perform additional functions such as cell phone charging, in addition to offering a wide array of health benefits, as opposed to diesel mills.
According to the CrossBoundary Innovation Lab, April 2020 Study: Milling on Mini-Grids, if a mill for solar mini-grids, which can compete with diesel can be developed and scaled, the economics of mini-grids will change. 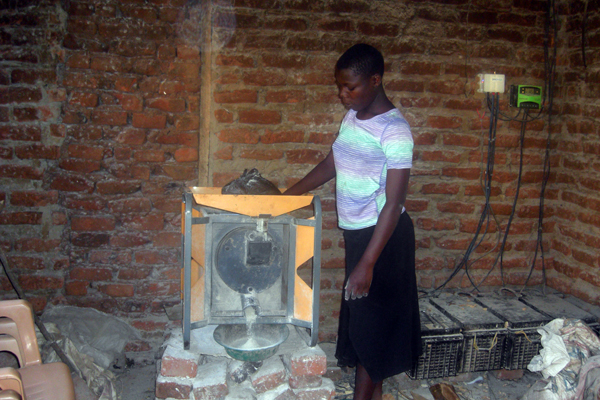 Millers are reliable, high-earning, and high-consuming energy customers. On average, they spend $240 (about Shs875,000) monthly on diesel, at sites where the electricity spend of the average mini-grid customer is $5 (about Shs18,000) per month. Moreover, millers are ready to switch: 95 per cent of millers prefer solar PV to diesel as an energy source, and they are even willing to pay more for an electric mill.

The cost of a solar mill

A solar mill costs Shs14m, which is high for an average farmer.
“The cost of the mill is not so much favourable to a farmer to afford. The cost should be reduced so that it is pocket-friendly,” Sarafina Betty Namusobya, a pioneer user of the eco-friendly solar-powered milling technology in Uganda,  says.
Annette Kubonaku Bazibu, another pioneer user of a solar-powered milling technology in Uganda,  says: “The initial cost is very high compared to a diesel or electric mill. Although we are paying back in installments to eventually own the mills, our customers are seasonal.”

Patricia Ayebare, the grants coordinator at Power Trust Uganda Limited, says each machine costs Shs14m if it is payable in installments and its Shs13m if someone is paying cash.
“We also realised that the machine cost is high. But the price raise is because the solar system is big. So, most of the costs is on the solar system because the mill alone is Shs3.5m,” Ayebare says.

“The solar mill technology has not picked up because it is still in the pilot and scale up phase. There are still some technological challenges to the technology,” Ayebare says.
She adds: “Solar energy is expensive for most people in the off-grid communities.”
Cost is still a major barrier to scale, and the inability of smallholder farmers to pay means that an addressable market of $11.3 billion for irrigation, cooling and refrigeration, and agro-processing is in reality only a serviceable market of $734 million (just six per cent of the potential), according to IFC Lighting Global.

“That is mainly because of affordability,” Kawuma notes. “This means end-user finance is essential to bring down costs, allow for wider deployment of solar milling solutions, and lead to scale, increased production, and value addition. In addition, the supply chain for weak-grid and off-grid agro-processing machinery must become further standardised and strengthened, which will also bring down costs.”

“I have a problem with the invertor. It is not giving us enough power for the lights. It cannot sustain light. The engineers who come in from Kampala are not regular and we do not have others around here. We lose customers when they come here and do not find the mill in operation. A mill could break down for one or two weeks before the engineers come from Kampala to repair it. They should train engineers who will be nearby here,” Namusobya says.
“We plan to recruit technicians in future in the different sites,” Ayebare says.

“Solar milling is a complex process – from technology, market fit and business case perspective. For example, solar milling does not have the value addition potential that solar water pumps provide to high value food crops, as milling deals with the lowest value food crops where the profit margins are minuscule,” the chief executive officer of Agsol,  Matt Carr, writes in the forward of the Efficiency for Access Coalition and E4I report.

“However, milling has arguably the potential to become the most important productive use technology, not only because of the universal need that off-grid communities have for milling services, but also because it is a uniquely gender-segregated household task – women or girls are always the ones tasked with food processing,” Carr says.
“In Africa, about 40 billion hours of off-grid women’s unpaid time are spent on processing each year. Automating this process would free up a significant amount of time for women and girls, which could be put towards other productive or educational activities, and support women’s empowerment,” Carr adds.

As to why Africa has not adopted solar energy as a viable alternative to grid electricity, Kawuma observes: “There is lack of an enabling environment. Governments should fast-track policy, institutional and financial support to the solar energy industry, especially for productive use cases that have the potential to grow effective demand for solar energy. This will spur private sector companies to invest and grow the solar energy industry.”

“There are high costs of solar equipment. In many African countries, most grid power connections, solar energy requires a high initial investment that is not affordable by many citizens in the rural communities. Incentives should be put in place to increase access to credit finance for small and medium enterprises and farmers. And there is lack of awareness. Low effective demand due to limited awareness of the benefits and applications of solar energy,” Kawuma adds.