As Joshua Cheptegei leads Uganda’s most successful Olympic team— four medals, including two golds—to meet the President at Kololo Grounds today, everyone is keen to know what Mr Museveni will offer or promise.

Performing at the Olympics is such an honour and winning a medal is every athlete’s dream. The celebration tells it all. It makes nobodies national heroes.
Yet Olympians do not get prize money, as they do in other events such as Diamond League circuits in athletics, soccer or basketball leagues, every year.
These honours and medals do not pay bills or buy food even at the cheapest grocery.

So, Olympians—medallists and representatives—who put in hundreds of hours training to represent their nations at the grandest stage, need money to survive.
That’s why some countries adopted a system to financially reward their Olympians.
Some countries, according to the New York Times, give stipends, houses, lifetime supplies of beer, free flights or even exemptions from mandatory military service.
Some national governing bodies also give rewards — USA Wrestling gifted Kyle Snyder $250,000 (Shs880m) for his gold at the 2016 Rio Games.)

Not defined
But, in Uganda, the reward to Olympic medalists and excelling athletes is not defined. It basically depends on President Museveni.
When long distance runner Moses Kipsiro won two gold medals in the 10,000 and 5,000m at the 2010 Commonwealth Games, President Museveni offered him a brand new Toyota Hilux Double Cabin pick-up.

Prior to this, Dorcus Inzikuru received a house in her home town of Arua, and was promised a car for her gold medals at the 2005 World Championship and the 2006 Melbourne Commonwealth Games.
Just recently, former Cranes captain Denis Onyango cruised away in a fabulous Pajero Sport as the President’s gift on his retirement from national duty. 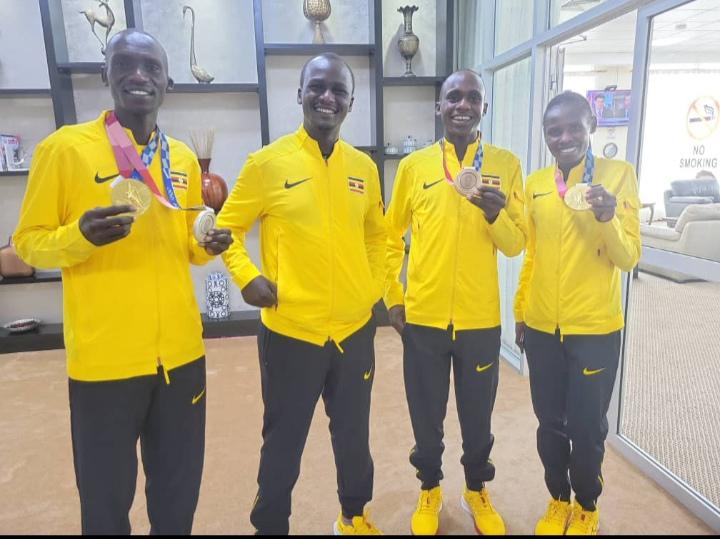 Uganda Cranes
Onyango and fellow Cranes had already picked $10,000 (Shs35m) each for finally taking Uganda to the African Nations Cup, after 39 years.
At one point, President Museveni directed that every athlete who wins gold, silver or bronze or an equivalent at the international level should earn Shs5m, Shs3m and Shs1m respectively, every month.

But that reward scheme was largely flawed as potential beneficiaries could receive money about once in seven months. Others waited in vain, until the head-of-state attempted to revise the scheme in 2020.
As Cheptegei leads Uganda’s most successful Olympic team— four medals, including two golds—to meet the President at Kololo Grounds today, everyone is keen to know what Museveni will offer or promise.

NCS attempt
After the 2018 Commonwealth Games in Gold Coast, Australia the National Council of Sports (NCS)  through the Ministry of Education demonstrated what they deemed a better rewarding scheme.
Cheptegei pocketed Shs50m for his 5,000 and 10,000m double gold, at the Games, Stella Chesang got Shs20m for winning the 10,000m race.
Solomon Mutai, who won silver in the marathon, got Shs15m while Mercyline Chelangat and Juma Miiro got Shs7.5m each for bronze in the 10,000m and boxing respectively.

Para-athlete David Emong got Shs30m for his gold at the 2017 World Para Athletics Championships in London and Shs20m for his silver medal, Uganda’s first, at the Rio 2016 Paralympic Games.
Last month, Dr Bernard Patrick Ogwel, the NCS general secretary, promised a reward for those who would excel in Tokyo. But he did not mention particulars.
“There’s a financial reward but we don’t want people to think it’s about money,” he told Daily Monitor on phone from Tokyo.

“We will be able to reveal after. I can promise you that we have put money aside. It’s in the bank only waiting for withdrawal when the Games are done,” he assured, adding that the rewards will also benefit those who will triumph at the Paralympic Games, also in Tokyo starting August 24.

Pending promises
At every opportunity, Inzikuru reminds government to “help me secure the land title of the house they built for me.”
She is also waiting for the car the President promised her 16 years ago.
She is not alone. Many athletes complain about the inconsistences in the monthly stipend scheme and on several occasions, State House aides have told the media and the potential beneficiaries that “it is a gift not an entitlement and it depends on the availability of the resources.”
State Minister for Sport Hamson Obua, who led Uganda’s delegation to Tokyo, admitted that a reliable rewarding scheme for athletes is urgent and can trigger better performance.

But the pending gifts are just part of the long list of Museveni’s undelivered promises to sport.
In the 2016  to 2021 manifesto, the NRM promised, among others, to: develop and institute a policy of affirmative action for athletes; bursaries and scholarships for elite athletes; a national rewards scheme for excelling national athletes; a pension scheme for nationally acclaimed sports persons and incentives for private sector investment in sports. None of these have been fulfilled.

Training centre
The High Altitude training Centre in Teryet, Kapchorwa District, was Museveni’s response to Kipsiro’s achievements at Delhi 2010.
It was the first thing Kiprotich reminded the President when he was hosted to a luncheon at State House after ending Uganda’s four-decade wait for Olympic gold in the aftermath of the London 2012 Games.
However, 11 years have passed before the first phase of the facility expected to solve most of national athletes’ training issues, is complete.

Sports minister Obua agreed it is long overdue. Amid the delays, Cheptegei used his resources to acquire land and establish the Joshua Cheptegei Training Centre, about 10km from Teryet. It is complete.
Beyond personal gifts, shall the new Olympic champion beg the President to order that Teryet is finally ready for use?

Mistrust as states fall out over jobs at EAC

A decade-long dispute over the distribution of jobs in the organs of the East African Community has come to a head at Eala.

It is alleged that Aziz Bashir was on Sunday involved in a minor accident with an unidentified boda boda rider who scratched his car, a Toyota Allex

Uganda Airlines to leverage on cargo for Dubai flights