Lawyers representing Kyadondo East Member of Parliament (MP) Robert Kyagulanyi alias Bobi Wine, have revealed that the MP is in poor health condition and can hardly walk or talk.

The lawyers, together with members of Bobi Wine’s family) had initially been blocked from accessing the MP who was arrested on Monday in Arua town together with several opposition politicians. He was arraigned before the General Court Martial in Gulu and charged with unlawful possession of firearms and ammunition on Thursday.

However, he was charged in the presence of only his two lawyers; Mr Asuman Basalirwa (Bugiri Municipality MP) and Mr Medard Seggona (Busiro East MP).

According to Mr Asuman Basalirwa, who was inside the courtroom, his client’s face was swollen and could hardly talk or walk.
Mr Seggona said Bobi Wine didn’t take plea since he was in a very poor health condition and handcuffed.
“Mr Kyagulanyi’s health is in dire state. He is in great pain. He can’t talk, he can’t walk, and he sits with a lot of difficulty. His face is swollen and cannot see because of the torture by SFC soldiers. He couldn’t speak when the charges were read to him and I believe he didn’t know what was going or understood the charges read to him,” Mr Seggona told journalists.

His family was not permitted to attend the court session chaired by Lt Gen Andrew Gutti.

Wife breaks down
Ms Barbara Itungo alias Barbie, the wife of Bobi Wine broke down when her husband’s lawyers narrated how he was tortured.
“As a wife and a mother, I feel my patience is being tested so much. Government should let me have access to my husband. I am concerned about his state because I understand he was beaten by the soldiers,” she said.

Mr Basalirwa said Bobi Wine was airlifted to Kampala in a chopper. It’s not clear whether the MP who campaigned for Mr Kassiano Wadri, the eventual winner of the Arua Municipality by-election, has been taken to hospital or a military prison.
He, however, said they agreed with Gen Gutti to ensure that Bobi Wine gets immediate medical attention and is granted unlimited access to his lawyers and relatives.

According to a Thursday statement by the army spokesperson, Brig, Richard Karemire, the MP has was subsequently remanded until Thursday next week.
“As part of the investigations into these acts of violence, the Police arrested key organizers and participants including Hon Robert Ssentamu Kyagulanyi the Member of Parliament for Kyadondo East Constituency. During the search of his hotel room by investigators, he was found possessing arms and ammunition which are ordinarily a monopoly of the Defence Forces,” Brig Karemire’s statement reads in part. “Consequently, Hon Kyagulanyi has today been arraigned before the General Court Martial in Gulu and charged under S 119 (1) (h) of the UPDF Act, 2005 on accounts of unlawful possession of firearms and ammunition. He has subsequently been remanded till 23rd August 2018”. 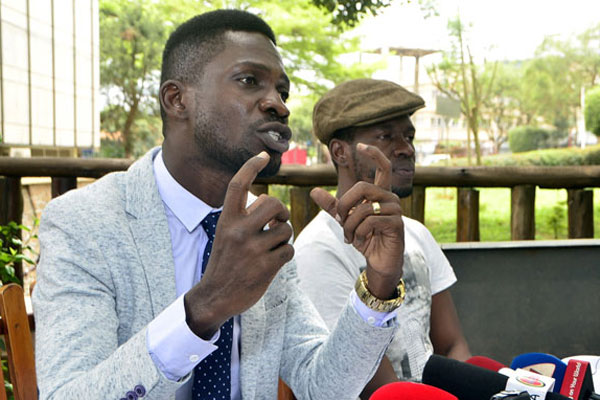 According to a Thursday statement by the army spokesperson, Brig, Richard Karemire, the MP has was subsequently remanded until Thursday next week