Makerere guild president, Mr Julius Kateregga who had called for the assembly was also arrested and driven to unknown destination.

The vice guild president Ms Judith Nalukwago told this reporter that Mr Kateregga was arrested on his way from the Kamwokya-based NBS TV to the university where he was supposed to brief students on what transpired in the meeting student leaders had with the university council on Tuesday.
Lectures have also been disrupted and students forced out of the lecture rooms.
Students were also seen running from Lumumba, Mary Stuart and Mitchell halls after police lobbed teargas canisters.
This come just hours after the top governing body, the university council 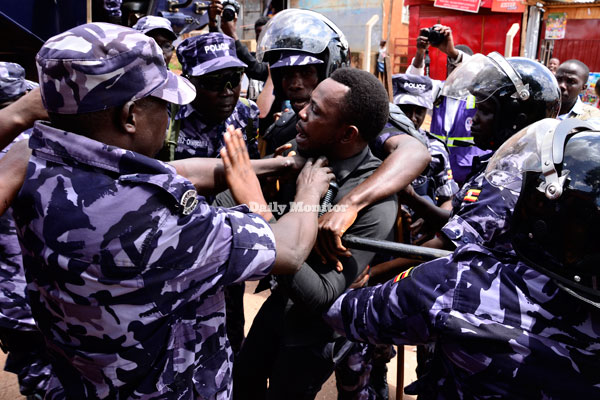 following the students’ protest which started last week.
The university council in July 2018 approved the policy that sanctioned a 15 percent increment on both tuition and functional fees, over the next five years.

Since October 22, students have been protesting the policy on grounds that it was unfair and making education services expensive at Uganda’s oldest public university.
In an emergency meeting with student leaders on Tuesday, the university council agreed to scrap the 15 percent increment from functional fees but maintained that the 15 percent fees adjustment shall continue to be applied on tuition fees for the remaining period of three years.

“The 15 percent adjustment in fees shall not apply to functional fees for the remaining period of implementation of fees structure adopted in July 2018. Functional fees shall be capped at the rate applied on the admission cohort for 2019/2020 academic year for the next three years,” reads part of the statement signed by the council chairperson Ms Lorna Magara and the council secretary Mr Yufuf Kiranda.